Unsurprisingly NXT upstaged the main roster yet again, with a strong TakeOver special the night before SummerSlam.  While probably not the best Brooklyn special (The original is still at the top of the pile for me, on the strength of its double main event), number 4 delivered five decent-to-excellent bouts with scarcely an ounce of fat (aside from perhaps the overly long main event). 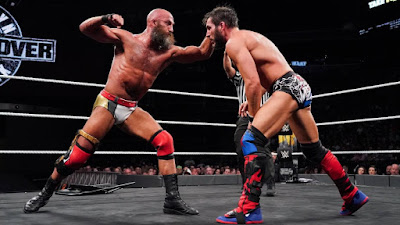 The show opened with a blazing tag team battle, as Roderick Strong and Kyle O'Reilly faced Moustache Mountain.  This had almost nonstop action throughout its 18 minute running time, with nearfalls galore.  Undisputed Era had the superior technical acumen, but Tyler Bate and Trent Seven showed off deceptively overwhelming power.  The two teams traded potentially match-ending moves until the champs outmaneuvered the challengers and hit Total Elimination for the win.  Splendid opening contest.  ***3/4 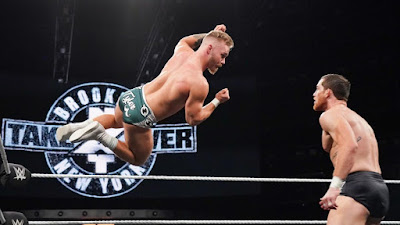 The weakest match for me was Velveteen Dream vs. EC3.  I like Dream quite a lot and feel like he already has the complete package - loads of charisma and crazy athleticism; he just needs a little more seasoning.  I don't feel the same way about EC3.  His overly muscular build makes him clumsy and stiff, like John Cena circa 2004.  He looks great and has some charisma I guess, though it doesn't seem effortless like Dream's.  But he just doesn't move all that well.  Dream going over here was the right move.  **1/2

For me the match of the night was Adam Cole vs. Ricochet.  Cole for me has been a little underwhelming in-ring.  While he's compelling from a character standpoint there wasn't anything about him mechanically that stood out to me.  In this match though his big thing was counterwrestling.  He played the crafty ring general, always aware of where he was and what his opponent was about to do.  Ricochet meanwhile got to show off his insane aerial offense.  The spot of the entire night was Ric going for a springboard moonsault and meeting a kick to the face - just mindboggling and perfectly timed.  After 15 minutes Ricochet won the match and the North American title with a 630 senton (I dunno how you even practice a move like that - one bad landing and you'll never do the move, or potentially walk, again).  Super match.  **** 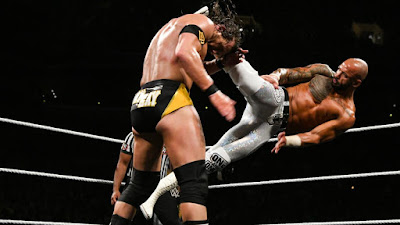 I think my second-favorite match was Shayna Baszler vs. Kairi Sane, pretty unexpectedly.  Baszler has come a long way in the last six months, playing the role of scary bully heel superbly (She's legitimately terrifying the same way Mike Tyson was), while Sane's speed and pluckiness got the better of Shayna for much of the match.  Then once Baszler took control and pounded the crap out of her, Sane fired up and defiantly asked for more punishment.  I bought into all the false finishes, from Sane's multiple flying elbow attempts to Baszler's chokeouts.  Finally at 13 minutes Sane countered the choke with a Bret Hart-style rollback pin to capture the title.  I had pretty high hopes for this match and it exceeded them; from a storytelling standpoint this match was a big highlight, even overshadowing the main event in my opinion.  ***3/4 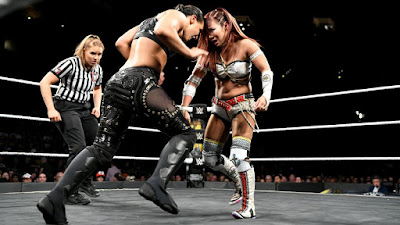 Now for the main event.  I liked it.  I liked it just fine.  I wasn't blown away by it though.  For me the second Gargano-Ciampa match was far and away the best one.  This fell somewhere near the first match for me.  Its length felt artificially inflated and I found the ending kind of a copout.  I liked that the Last Man Standing gimmick didn't totally get in the way like it always does on the main roster.  The referee only used the 10-count after a move that might actually end the match, rather than THE WHOLE TIME.  This had callbacks to the two previous matches, with the use of the crutch and Ciampa pulling back the ring mat.  And like the second match the action made its way to the ring entrance area, where Gargano handcuffed Ciampa to the equipment and went for a running knee, but bashed it into the equipment and tumbled over the edge.  Ciampa then beat the ten-count by simply rolling off the stage and standing on the floor.  It felt anticlimactic after the spot where Ciampa did a running knee with a chair through the barricade and then piled stuff on top of Gargano to keep him from getting up.  To me that would've been a better finish.  This match was very good, but not great.  ***1/2 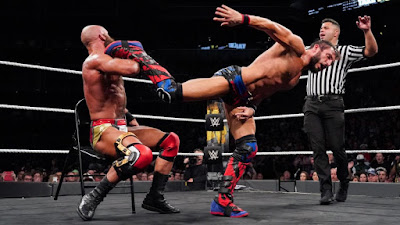 That said, four out of five matches scoring ***1/2 or better means a pretty damn good little show.  TakeOver specials pretty much never underdeliver, and this was an easy 2.5 hours to sit through, that resolved feuds and elevated new stars.  A very easy recommendation.

Best Match: Adam Cole vs. Ricochet
Worst Match: Velveteen Dream vs. EC3
What I'd Change: Cut about eight minutes from the main event and give it a stronger finish
Most Disappointing Match: Probably the main event
Most Pleasant Surprise: The women's match
Overall Rating: 8.5/10


Posted by Justin Enuffa Ballard at 9:20 AM

Email ThisBlogThis!Share to TwitterShare to FacebookShare to Pinterest
Labels: The History of NXT: TakeOver, Wrestling Stuff