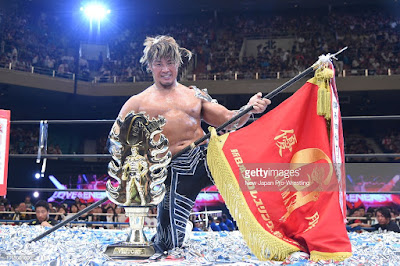 Another superb G1 Climax has come to a close, culminating in what was for me a very unexpected result.  The short n' skinny of it is that the company's former Ace has once again punched his ticket to the main event of WrestleKingdom.  Hiroshi Tanahashi led the A Block throughout the tournament and outlasted his archrival Kazuchika Okada, going to a time limit draw for the third time in their feud.  Since Tanahashi was two points ahead of Okada he got the Finals slot.  In the B Block it was Kota Ibushi upsetting his best friend Kenny Omega and going on to face his idol for the briefcase.

As usual the final matches of each block, and the overall final itself, were three of the highlights of the entire four-week tour.  But this tourney was rife with 4 and 5-star matches, ongoing themes and stories, and some absolutely stellar performances.  Relative G1 newcomers Michael Elgin and Juice Robinson each delivered multiple excellent matches, while newbies Hangman Page and Jay White put themselves on the map.  Page finished with only six points but looked right at home with the top dogs in the block, while Jay White scored major upset wins over both Okada and Tanahashi (who went undefeated otherwise), and was in the running to win the block up until the last night.  If there were any doubts about White's legitimacy as a major rising star, his showing here erased them.  The man is 25 years old and has a very bright future ahead.

One of the running angles over these four weeks was the constant cockblockery of Tama Tonga and his Firing Squad; both Tonga and Bad Luck Fale either took disqualification losses or won with lots of outside interference.  These shenanigans didn't do their match quality any favors but it did make clear their mission - to sabotage one of the perennial highlights of the New Japan calendar.  I'm not sure if that'll get them over in a good way, or where they go from here, but for a couple of lower-tier heels trying to elevate their profile, this was certainly a different approach.

Also of note was Zack Sabre Jr., who followed up his starmaking New Japan Cup run with a very strong showing (Sabre was part of a four-way tie at the end with Ibushi, Omega and Naito) and scored wins over NEVER Champion Hirooki Goto and US Champion Juice Robinson, plus Naito and Ishii.  Sabre should pick up some gold by year's end and I'd love to see him win both of those titles in succession.  Sabre as a heel double champion would be pretty cool.
Two guys are in contention for tournament MVP, and neither of these should come as any shock.  Tomohiro Ishii as always had an incredible run, participating in some of the best matches of the tour against varied opponents.  Two of his bouts, against Kenny Omega and Kota Ibushi respectively, rank easily in my top five of the tournament.  His only MVP competition was Ibushi himself, who went all-out in virtually every match, often overshadowing his best friend Kenny Omega on his way to a climactic win over the IWGP Champ.  Ibushi was off-the-charts great in this tournament and I was unabashedly rooting for him to go all the way.  Regardless I'm sure we haven't seen the last of Ibushi vs. Omega, and he has a legit claim to a title match should he choose to challenge his fellow Golden Lover.  Since Ibushi made it to the finals and delivered yet another classic I'll give him the MVP nod (Incidentally six of my ten favorite matches from the tournament featured Ibushi).

Coming out of this we have some intriguing matches on the horizon.  Kenny Omega will defend the title against Tomohiro Ishii, probably at one of the Destruction events, and considering how incredible their G1 match was I expect another ***** epic.  Juice Robinson has been challenged by both Cody and Sabre, so I imagine we'll see both of those matches soon.  Okada is on his own now after breaking off from manager Gedo; going forward Gedo will no longer accompany the Rainmaker to ringside.  Since Jay White was the only man to defeat Tanahashi I assume he'll challenge for the briefcase this fall in a match that will likely erase the memory of their somewhat disappointing Tokyo Dome meeting.  NJPW's fall season should bring plenty of intrigue as we watch the pieces fall into place for WrestleKingdom 13, which presumably will be headlined by Omega vs. Tanahashi, a landmark feud we never really got to see play out in 2016 thanks to Tana's bicep tear.  So while it wasn't my first choice to main event WK13, it's a very fresh matchup that should deliver in spades.

Overall I'd say G1 27 is still the best edition of the tournament, but 28 was a fantastic followup that will be remembered right alongside it.

Now for my top ten G1 matches.  You'll notice almost all of them are from the far superior B Block; while A Block had its share of great matches, the B roster pretty universally outclassed them.

Ibushi and Sabre each started their tournament runs with a killer rematch from last year's G1 (and this year's New Japan Cup).  After 23 minutes of amazing counter wrestling, Ibushi hit the Kamigoye for the tiebreaking win.  On any other night this would've stolen the show, but....

Omega and Naito had in my opinion the best match of the previous two G1s, the "semifinals" in 2016 and the Final in 2017.  This match was not far behind at all.  Since it was their first match of the tourney they played it a bit safer, but that didn't detract from its quality.  This was an excellent rubber match, which Kenny took with a Jay Driller/One Winged Angle sequence.  An easy MOTYC.

It's always a motherfuckin' FIGHT when these two get together, and this was no exception.  Ishii and Goto beat a rain check into each other for 18 minutes, adding another classic to their long feud and giving Ishii a win over the NEVER Openweight Champion (For the record Ishii beat all three champions in his block).

This match was unreal awesome.  They started out with Ibushi trying to win a standup fight and failing at every turn.  Not until he dragged the match outside and hit a moonsault from the loge section did Ibushi take full control, and from then on it was a solid ten minutes of both guys swinging for the fences.  This match was third of the five tourney bouts on the card and proved impossible to follow (though Omega vs. Sanada in the main event did its best).

Yet another great showing from Ibushi, taking on the superior muscle of the NEVER champ in his hometown.  This was 18 minutes of Goto attempting to bully Ibushi, but the Golden Star eked out another victory with the Kamigoye after several minutes of wild counters and reversals.

This may have been the best match of the entire tournament.  They started out with a miscue or two, but this match escalated to an insane pitch that left both men bleeding from the mouth by the end.  The last several minutes of this were absolutely bonkers.  Ishii scored a major upset win with the brain buster to stake his claim as a title contender.

On any other night this match runs away with MOTN honors.  But it was stuck following an impossibly great bout in Omega-Ishii.  Still Ibushi and Naito put together an incredible match in their own right, one that included a couple cringeworthy spots where Naito got German suplexed on his head and later spiked with an Emerald Fusion-type move.  One Kamigoye later and Ibushi had all but eliminated Naito from the running.

The two legendary rivals met once again with a 5-3-2 record in favor of Okada.  But in this tournament Tana led the block by two points.  He didn't have to beat Okada here, but personally he still NEEDED to.  But in the end after thirty dramatic minutes Tanahashi couldn't put his successor away, nor could Okada land the killing stroke to advance to the finals.  Thus ended this duo's third time limit draw in G1 history.  Tanahashi accumulated more points than anyone, with a final total of 15.

The most anticipated match of the tournament for most, including myself, Omega and Ibushi had not wrestled each other since 2012, before either of them had jumped to New Japan.  Ibushi had a 2-0 record against his best friend going into this, and the story here was Kenny trying to put the match away early to prevent it from escalating into a war that might damage their friendship.  But escalate it did, and by the end each man proved he was willing to do anything to advance to the finals.  This was a helluva spectacle that left room for a rematch down the line.

Once again the student defiantly tried to earn his idol's respect.  Since their Intercontinental Title feud last year Tanahashi has been urging Ibushi to come down to earth and get serious about his career.  Ibushi urgently wanted to show Tana he could get to the next level, but after 35 minutes of absolutely classic pro wrestling, Tanahashi put his student away with three Hi-Fly Flows to win his third G1 tournament.  Ibushi refused a handshake after the match, leaving the ring with his face sorrowfully buried in his hands, shades of Okada at WrestleKingdom 9.  The addition of Kenny Omega and Katsuyori Shibata in their friends' respective corners added to the drama of this amazing final.  I have to think we'll see more of this student-mentor rivalry.

And that wraps up another G1 Climax recap.  As always it was a fantastic four weeks of wrestling, yielding so many MOTY candidates I'm not even sure how to rank them.  Kota Ibushi may not have won the briefcase but he made himself a major player with his work in this tourney.  The man is a force of nature.