British filmmaking has been on the decline for the past few years, with very little British films being made and between 2003 and 2010 only 7% of British films made a profit.  Most of this has to do with British dramas being tougher to sell to British audiences, and big budget action flicks appeal to British entertainment studios because there is a better chance for profit.  However, with the success of films such as this one being highlighted and Philomena, just a couple of British films that have garnered rave reviews along with awards, maybe films that pack an emotional punch will get more attention with British studios.  Personally, I like emotional movies because I can relate to them, they’re more “human” and there’s a lot of modesty to them.  Also, the acting is usually superb.  I’m not talking “chick flicks” like Steel Magnolias or Beaches, those films are just too over the top for me to the point where I stop believing them.  When movies try too hard to get their audience to cry, for me its usually the opposite, I just end up rolling my eyes and dismissing the film.  When films trust the story progression with its characters without going straight to the waterworks, it blends itself into a perfect human story.  With that, let me introduce you to The Selfish Giant. 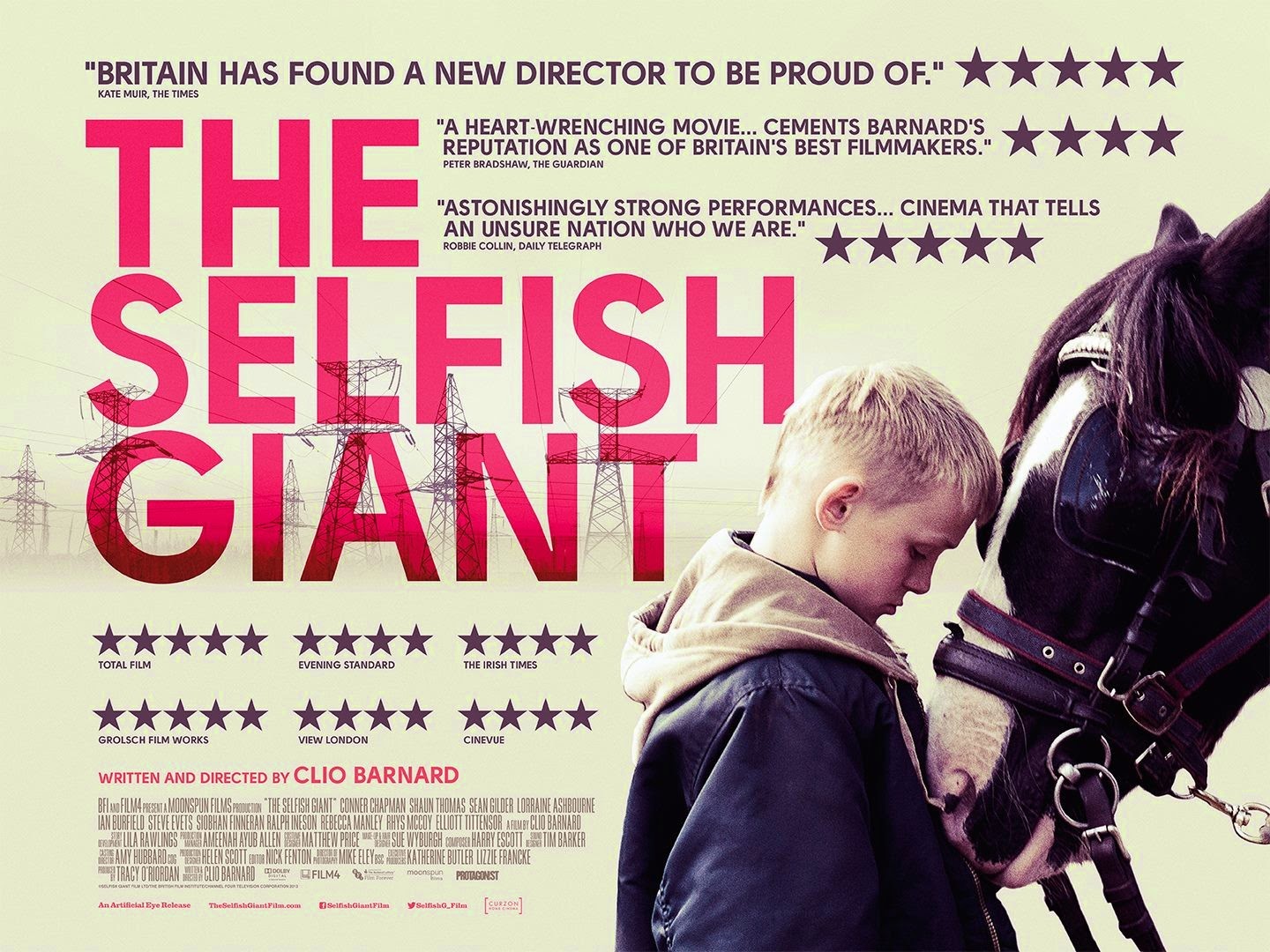 The film takes place in Northern England and centers around best friends Arbor and Swifty.  Arbor suffers from ADHD, angry outbursts and, along with his mother, shoulders the burden of his older brother’s drug debts.  Swifty is the oldest of eight in his family who lives in a house that doesn’t have basic needs, with a father who rents furniture and then sells it in order to support his family.  Both children long for affection and validation and find it in each other.  Arbor who has a short temper and is constantly in trouble leans on the always reliable Swifty, who is a gentler soul but is a rock of support for his friend.

The two boys come across a money making idea of rummaging the neighborhood for scrap metal and electrical wiring and selling it to Kitten, the local junk dealer who races street horses as an extra means to make money.  After he loses a race, he becomes aware of Swifty’s keen ability to handle his prize horse and enlists him to race him.  At the same time, Arbor sees the thieves making more money and begins to follow their lead.  The two rely on each other as they struggle to survive.  Dealing with his brother’s drug debts, Arbor feels a responsibility to help his mother as does Swifty with his family.  Arbor’s desire to make more money and going to any lengths necessary in order to obtain has him tip-toeing a fine line between honorable and being flat out dumb.  This runs up against Swifty’s belief that they shouldn’t push the envelope too much or else trouble will find them and take its toll.  Its in this conflict where the punch to the great lies.

The Selfish Giant is a gritty, realistic and human story that centers around the themes of friendship, capitalism, greed and the struggle to survive against the odds.  Its a grim tale that, in the end, opens you up and forces you to feel.  When I saw this film, I couldn’t help but cry and be touched by this film.  It was one of the best films I’d seen last year and continues to renew itself as such each and every time I watch it.

There isn’t a lot of action to this but the characters are clear and vibrant and the performances are just fantastic.  It won heavily at film festivals around Britain and the two boys portraying Arbor and Swifty both won for Best British Newcomer because the jury refused to separate them.  The film is highly rated holding a 97% on Rotten Tomatoes.  Even though its a British film, I highly recommend the subtitles since the accents are thick and heavy to the point where it reminds you of Brad Pitt in Snatch.  The story is a moving portrayal of the friendship that exists where merely living seems bleak and pointless.  I challenge you not to feel something with this movie.

The Selfish Giant is streaming on Netflix.

Check out the trailer people!