I believe Justin and I have softened our galactic stiffies enough to discuss the splendor that is Star Wars: The Force Awakens. There will be **SPOILERS** in this article, but we will not divulge any major plot points, and we definitely won’t discuss THAT scene (mainly because it’s tough to type through tears). So away we go. 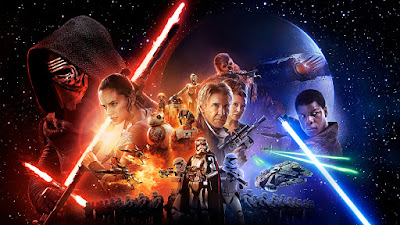 Justin: It's clearly going to take multiple viewings of JJ Abrams' sequel to fully absorb its effectiveness and determine its place in the Star Wars pantheon, but what were your first impressions of  The Force Awakens?


Dan: I thoroughly enjoyed it. I'm a sucker for nostalgia, and that beginning - seeing the words, "A long time ago in a galaxy far, far away...." followed by the blaring of John Williams score as the words STAR WARS materialize on the screen - well I was sucked right in. I was ready to get updated on all our past favorite characters but a funny thing happened on the way. Abrams gave us new, GOOD characters that I actually cared about and wanted to see more of. I was totally invested in Finn's journey from confused Stormtrooper to reluctant hero. Wanted to know more about our mysterious heroine Rey. And both of these British actors, John Boyega (whom I didnt know was British and he does a killer American accent) and Daisy Ridley are quite good. They both seem capable of pushing the mythos of the Star Wars universe forward.


Justin: This new trilogy was going to stand or fall based on the strength of its new characters, and fortunately Rey, Finn and Poe are all incredibly likable, clearly-drawn heroes you instantly want to spend time with.  Each of them has elements of Han, Luke and Leia, but they also bring their own stuff to the table.  JJ and co. have done a great job of integrating the aging heroes of the originals with these new characters and making Episode 7 a real passing of the torch.  By the end we desperately want to see where the story takes these young swashbucklers and the script wisely leaves enough unanswered questions about where they came from. 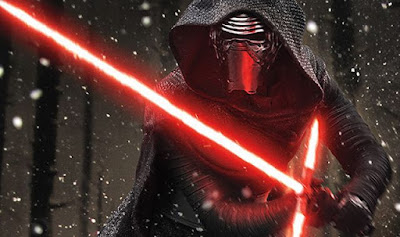 And Kylo Ren......Kylo is one of the most fascinating villains I've seen in a long time.  I won't go into too much detail about what his deal is, but Adam Driver has brought to life a complex, unsure bad guy with multiple dimensions, serious personal issues, and a totally believable sense of menace that echoes what we see from real-world murderers and criminals.  Ren is already a much deeper character than Darth Vader was by the end of A New Hope.  He was probably my favorite thing about the movie and I can't wait to see where they take this character.


Dan: I was very happy they didn't make Kylo a clear Vader clone. Sure, he's got the same fashion sense as the dreaded Sith Lord, but a much deeper character motivation. And thankfully they didn't "Vader" up his voice either. His normal talking voice sounds quite sinister under his tin can face.

My one huge gripe with the film is that the plot is horribly derivative. It's essentially an amalgam of A New Hope and Empire. The "maguffin" that sets off our adventure is legit the same as the original - a robot on a desert planet with some data that both sides of a civil war are trying to retrieve. After meeting a few unlikely heroes, the information gets back to the good guys and they have to blow up a giant, planet-sized weapon. That is EXACTLY the same plot as A New Hope. I don't really wanna delve into the Empire similarities so as not to ruin everything but rest assured, family plays a big part of it. 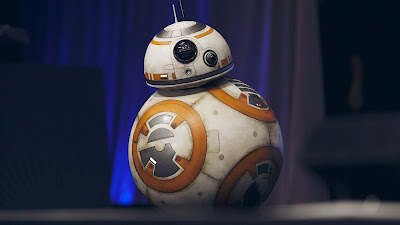 If only the plot were a tad more original. This is the third time we've seen a ragtag band of rebels attack and destroy a super weapon that is STILL being built with an outward weakness they can exploit. You'd think that would be on the first page of the TPS report the First Order sends out with the plans for this laser planet.

*****PLEASE NOTE: DO NOT, REPEAT, DO NOT BUILD THIS BEHEMOTH WITH ANY KIND OF EXHAUST PORTS, GENERATORS OR OTHER EASILY-FOUND WEAKNESSES THAT CAN BE PENETRATED BY FARMBOYS OR MALT BEVERAGE PITCHMEN***** 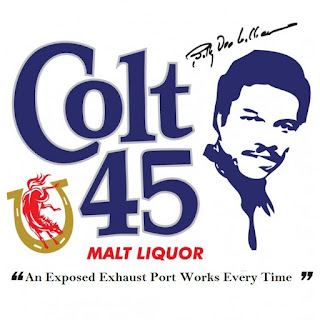 Justin: Yeah, Kylo is a Vader wannabe, which was a really cool touch.  By this point in the story Vader would clearly have this legend about him that would be attractive to a young, impressionable, violent a-hole.  Particularly when said degenerate is Vader's grandson.

The Death Star thing is very tired.  I would've preferred if the First Order had invaded a central Republic location and there was a big battle sequence there, while the more personal stuff were going on elsewhere.  That would've been more original.  Still, at least the Death Star bit was treated as a backdrop instead of as the main story thread.  But yes, the bad guys really need to quit building easily-destroyed doomsday machines.

I would also like to have seen more of the inner workings of the New Republic.  The only militaristic stuff we got was the Resistance, which is now an arm of the established government as opposed to a ragtag group of rebels.  I guess this would be akin to US Special Forces, where they just go in quietly to clean up some kind of skirmish.  But what about the official Republic military forces?

And where did the First Order get all the money to build another planet-killing machine?


Dan: I assume the Empire and now the First Order are just like a bank, giving out soul-crushing student loans all over the galaxy. Those Jedi Academies ain't free!

Overall, it was a fine Star Wars film, laying out pieces for future installments while also giving a nod to past installments (the good ones, not the prequels). I'm excited to see more Star Wars movies in the next coupla years.

Yes, a very worthy entry in the series that announced "Star Wars is back!"  At this point I'd rank it third overall, behind A New Hope and Empire.  Unlike with the prequels I'm really excited to see where the story goes, and fortunately we only have to wait 17 months until Episode 8.  Plus we get a standalone movie in between.  Star Wars movies are finally fun again.

1. Adam Driver as Kylo Ren is a worthy adversary.
2. The scene when the new heroes first meet Han and they run away from/fight some weirdo space creatures didn't feel very Star Wars-like and bored me.
3. Chewie did more in this movie than he did in the other 6 combined.
4. Princess Leia seems to have really fallen very far from royalty. Yeesh.
5. BB-8 was awesome, but R2-D2 is still the GOAT.
6. Han should've shot first.


Justin: My thoughts about your thoughts...

1. Agreed.  I'm hoping in Ep8 Kylo becomes more confident and more evil.
2. It didn't feel very Star Wars-y but I wasn't bored by it.
3. Chewie rules.
4. Well ya know, you grow up as a royal, always told you're destined for greatness, you have unlimited access to booze and coke.  Do the meth...er, MATH.
5. Be a good fight though.
6. He always used to.


Well that wraps up our initial impressions of Star Wars: The Force Awakens.  Comment below with your take....
Posted by Justin Enuffa Ballard at 4:07 PM