The Arrival of Roman Reigns, or Look Who Just Woke Up!

Well WWE finally did something right.  They finally realized that if the fans are going to identify with or cheer Roman Reigns he needs to get angry, expose his humanity, and put a stop to endlessly being screwed over. 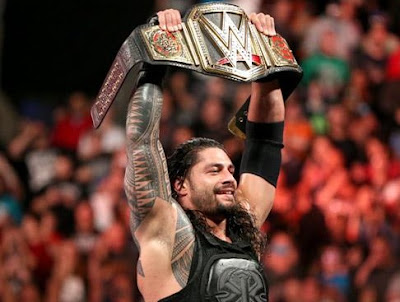 No one likes ineffectual babyfaces.  An underdog is one thing, an underdog built like a tank, decked out in riot gear, who repeatedly comes up short in big match situations is a recipe for box office poison.  WWE at last realized this and booked Reigns to snap Sunday night, after getting the shaft one too many times.  The epic beatdown he gave Triple H brought a mostly indifferent Boston crowd (who'd just suffered through a totally missable PPV, minus the awesome tag team opener) to its feet and had them chanting "Thank you Roman."  This was a big step for young Mr. Reigns.  The fans finally became invested in his character and wanted to see him serve up a big ol' slice of justice cake.  And Reigns did just that, laying waste to one Paul Levesque and rendering him stretcher-bound.  Step one was complete: hook the audience into wanting to see Reigns' next move.

On last night's RAW they got right down to business, as Stephanie confronted Reigns and slapped him hard several times (She connected too, Reigns' face was nice n' rosy).  Reigns initially laughed it off, but became deadly serious by the end of the segment.  This was well done, though it's yet another instance of the McMahons never being intimidated by any of the wrestlers.  We'd see an unforgivable example of this later in the show.  Steph announced that she wouldn't fire Reigns because Hunter asked her not to (foreshadowing a match between the two I'm sure), but Vince was on his way and he just might (foreshadowing the ball-shrinking fear everyone in the building apparently has for a septuagenarian).


Vince's entrance came during a match of course, and when he showed up the two match participants, Bo Dallas and R-Truth, sold abject intimidation.  Then Vince proceeded to stop the match and kick both guys out of the ring.  Vince, tell us again why the current generation isn't getting over?


Vince called out Reigns and attempted to dress him down, but Leakee wasn't havin' it.  Vince teased giving Reigns another Title shot, Reigns double-dog dared him to actually go through with it, and Vince agreed on the condition that if Reigns failed he'd be served his walkin' papers.  And then Vince kicked Reigns in the balls, dropping this renewed killing machine to his knees.  I'd like to repeat that: the top babyface in the company, who not 24 hours earlier absolutely obliterated the all-powerful Dark Lord of the Ring Triple H, Hulk Smash-style, got dropped by a Seventy. Year. Old. Man.  Tell us again Vince, why aren't today's stars connecting with the audience?


Anywho, it all ended well.  Reigns got his Title match, and despite interference from the League of Nations and Vince himself, punched and speared his way to victory.  And the crowd went BANANAS.  This was the same building where eleven months ago Reigns (and The Rock of all people) were met with unmitigated hostility the likes of which I'd never seen for a top babyface.  To think, all it took was changing Reigns' character from a chump loser to a badass winner.  Isn't it strange how tactics that have always worked in the past worked here?

But as a wiser man than myself once said, "Let's not start suckin' each other's dicks just yet."

There's still a lot wrong with the product as a whole, and Reigns himself still needs some repackaging.  His promos need to come from the heart, not off the page of some inept screenwriter.  His riot gear still looks midcard and needs to be replaced with something a bit more Champion-esque.  His finisher is still horribly overused and not very convincing.

But this is a start.
Posted by Justin Enuffa Ballard at 10:23 AM