In the spirit of our holiday season, today we invite you to our Festivus Celebration, and to begin we start with the Airing of Grievances. It doesn’t end til someone volunteers for the Feats of Strength. “How bout George?” 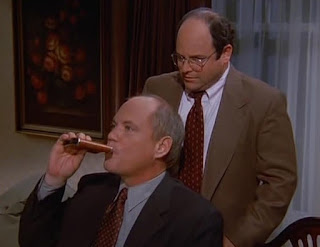 The Baltimore Ravens
I’m very disappointed in this team. Not that they’ve lost a billion games or that a bunch of them have been injured. Oh, no, that makes me happy. I’m pissed off they’ve won ANY games. I was hoping for an 0-fer for this whiny, crybaby team. These guys set off the Deflategate mess by crying to the NFL after Belichick and Brady bitchslapped them with illegal not illegal formations that dumbass John Harbaugh couldn’t figure out. So they yell about air missing from footballs and set off an investigation easily explained by science. This team deserves every bad thing that happens to them, including these fellas below. Suck a dick, Baltimore. A big, fat dick.


The Referees
And we thought the replacement refs were bad? Holy SHIT, this season has been a clusterfuck of epic proportions with these idiots. These guys fuck up more than Steve Harvey.


Roger Goodell
Could I end this with anyone but the ginger hammer? This fucking guy makes Donald Trump look like he’s making rational decisions. For a man barking about integrity day after day, he and the league he runs are sorely lacking in it. From starting a witch hunt against the best quarterback that’s ever lived, to being completely tone-deaf on how to deal with domestic abuse, not to mention that he evidently believes concussions don’t exist, this redheaded fuck wouldn’t be able to find his dick with two hands and a map. This guy ignores all rules and doles out any kind of punishment he deems necessary, without a care in the world.  The complete lack of intelligence he shows on a day-to-day is astounding, eclipsed only by the fact that he’s paid over $40 million a year to be a brain-dead dipshit. Fuck you.


PICKS (these are Hail Marys...had to pick games I knew the boys wouldn’t, and said, what the hell, lets GO BIG)

I GOT A LOT OF PROBLEMS WITH YOU PEOPLE!!!

Odell Beckham Jr.
Way to go. You lost your goddamn mind and got suspended for Week 16. Also known as the Fantasy Football Finals. You’ve singlehandedly crippled my championship dreams in two leagues. (Maybe this means nothing in the real world, but hey, there’s money on the line). And why? Because someone called you names? WHAT!!? Have you ever played sports? I’ve never even been in a pickup game when there wasn’t trash talk. Maybe take this week to reflect on things and grow a set. Fucking baby. I haven’t seen a guy lose it that badly since I was decked out on a golf trip a couple years ago.

Chip Kelly
What a fat-faced moron. Typically I reserve such sentiments for Miggsy. But it also applies here. Guy made like 217 roster moves in the offseason to get “his kind of team.” Well if the goal was to go below .500 and lose in one of the worst divisions in NFL history, congrats. This is what happens when a guy runs an NFL team like a kid playing Madden.

The Refs and all the God Damn Penalties


There are 1000 penalties a game. Those are exact numbers. Let the teams play for Chrissake. Every big defensive play, you have to wait to celebrate just in case the Safety breathed on a receiver on the other side of the field. Listen, if I wanted to see that much yellow, I’d ask Scottie Pickles to take his shoes off. I think the kids got Jaundice or something.

People who thought Miami would challenge the Pats this year
When will you fucking learn?

BRANDONS BOOM GRIEVANCE OF THE YEAR: COLTS & RAVENS
10-18. That’s the collective record of the 2 biggest crybaby organizations these eyes have ever seen. So I guess you got cheated 18 times this year? That’s a lot. Enjoy your draft picks you hunks of shit. For the Ravens, at least Baltimore is a great city. Oh, wait, never mind. And Indy? Well Indy...you’ll always have this:

I’ve got a lot of problems with the NFL and you’re gonna hear about 'em...

Demarco Murray
The guy leads the league in rushing in 2014 with an incredible 1,845 yards and 13 TDs. This year he’s managed just 606 and 4. In most fantasy drafts he had to be a first-rounder. There are countless owners left scratching their not-bald heads. I’m one of them. Is he distracted by tinsel? Did his horse have to be shot? Did he miss time for a domestic assault? Did he forget how to run? It is the Christmas season maybe this guy can help him…


That kind of ineptitude is only rivaled by B-Cuddy’s high school academic record. One guy used to run all over the map, the other can’t even read one.

Atlanta Falcons
They are the worst team in the NFL. The only team they beat with a winning record was the Tony Romo-less Cowboys who were 2-0 at the time. That’s right their last "big" came in week three to a team starting this guy...


Matty Ice has melted. Its Matty Puddles now. Its gotten so bad for him that not even Boston College recognizes him as an alum. If you’ve ever been to the Heights to see a game, you know they are just begging to be recognized as a big football school. Their last hope is Luke Kuechly. Help us Obi Wan Kuechly, you’re only hope.

Miggsy’s Monster grievance of the year: Deflategate
This whole ordeal, much like J. Peterman’s romantic escapades, has been talked about ad nauseam. I’m even a little annoyed at myself that I‘ve brought it up again. What annoys me so much is that this still isn’t over. The Pats are poised to make another deep run in the playoffs and possibly win another Super Bowl and this is still hanging over their heads. It’s UNREAL. There are reports circling that the NFL randomly selected balls and tested them this week during the Patriots games. When is it going to end?

(Note: All picks and rants were made before the results of Odell Beckham Jr's suspension appeal were heard. If he remains suspended, Brandon is hilarious. If he's freed, Mike's pick STINKS).