Which means I’m off the Pats this week. Hell, I’m probably off them the rest of the way. They’ve been no good to me on this pick 'em all year. And this past Sunday was the beer that broke the thirty’s pack. That game was atrocious to watch as a Pats fan. Sloppy special teams, QB play, just all around terrible, like Miggsy’s family. What a bunch of feltheads they are. Check ‘em out at Christmas.

Playing for the Bears earlier this year, Jimmy got the start and got TROUNCED, 26-0. I see no reason why it should be any better. He’s awful. I heard he’s got a hard time using the phone cause he can’t find the receiver (ZING!). The only way we young James is gonna celebrate winning this game is if he’s using his PlayStation. Even if Schaub pulls a last minute start, once he throws his weekly pick 6, Seattle only needs 4 more points to cover. No brainer.

Oakland @Denver (-7.5) THE PICK - DENVER
FOR THOSE ABOUT TO BROCK! WE SALUTE YOU!!! I’m all about this kid stomping the Raiders and hitting them with the Brock Bottom. Peyton will have to continue to sit on the bench, or the Brocking chair more likely. I don’t see him losing his job to the fragile one anytime soon. No sir, it’s Brockodile Dundee’s time to shine, and he’ll continue to do that this Sunday. He’ll be performing a little Brockwork Orange on the Raiders, giving them nightmares for days, son, DAYS. He’ll be lighting up a few doobies after his win in the Brocky Mountains. HAIL THE BROCK STAR! (That’s all I got for Brock-related name puns).

DAN'S DOMINANT PICK OF THE WEEK
Dallas @ Green Bay (-7) THE PICK - GREEN BAY
You want analysis of this game? Here you go. 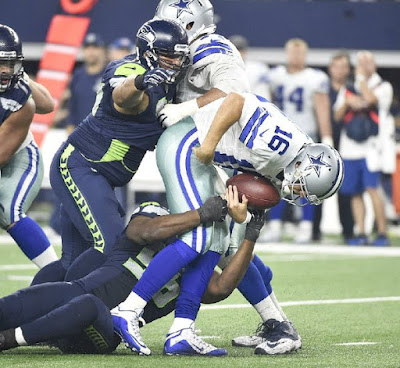 NFL picks, basketball write ups, WRESTLING shit?! How much can one man contribute? I think the editor and I need to start talking compensation. (Editor's Note: Get lost!)  No? Quick talk I guess. Anyways, back to this stupidity. It’s so lonely at the top. Chubby Captain Picard was supposed to keep up. But apparently his lack of endurance isn’t just on mattresses.  Meanwhile, Danny the Dingleberry is trying to hang on for dear life back there somewhere. His season’s lost and he knows it. He’ll probably go try to dig up a screenshot of him beating me at Duck Hunt or something to make himself feel better. Duck Hunt was a game back in your day, right Danny? Or was it Atari? What I’m trying to say you’re old, and go fuck yourself. On to the picks.

Pittsburgh @ Cincinnati (-3) – The Pick: STEELERS +3
Easily the best game on the schedule this week. Divisional foes. Two really good teams. I have no idea why NBC didn’t flex this game into the primetime slot instead of Pats-Texans. I think the Steelers win this game outright. Their offense is firing on all cylinders (cliché game on fleek), and they play very aggressive. Like Big Ben in a bathroom aggressive. The last time these 2 teams played, it was a low scoring battle. I’m expecting the opposite here. Steelers win on the last drive of the game 31-30.

Seattle (-10.5) @ Baltimore – The Pick: SEAHAWKS -10.5
This is a ridiculous amount of points to be giving up on the road. And this line was up in the air for a while. At one point, it was only Seattle -6. So you know all the money is coming in on the Hawks. Always a red flag. Remember, Vegas isn’t built on people winning money. But, I’m ignoring all the warning signs and still jumping on Seattle. They just steamrolled a decent team on the road. And Baltimore isn’t a decent team. The Ravens are completely decimated. Anytime a team is starting Matt Schaub, you know there’s trouble. Guy throws more touchdowns to the opposing team than his own. Is he even aware he’s not supposed to do that? It’s like having Thurman Merman as your QB. (Dropped on my head?...) How many times has Harbaugh told him he doesn’t want any fucking sandwiches? Seattle by a thousand. (LATE EDITION EDIT: It seems Clausen is starting for Baltimore and not Schaub. Hilarious. All my money on Seattle. ALL OF IT)

BRANDON’S BOOM PICK OF THE WEEK:
San Diego @ Kansas City (-10) – The Pick: CHIEFS -10
Another high point spread. But San Diego has never been this low. The team stinks. They’re probably moving to LA. The San Diegans have turned on them faster than they turned on Ron Burgundy with his poop mouth. On the other side, Kansas City is rolling. They’re fighting for a playoff spot and I don’t see them stumbling at home verse that bolo tie asshole. However, it’s impossible to feel too confident. Laying 10 points with an Andy Reid led team is usually a bad idea. He manages the game clock by sundial, and half his play-call sheet is a BBQ menu.
“Alright, 1st & Goal. Let’s go Ribs & Brisket sweep left”
“That’s not a play”
“Shit. Umm…just run it”
“Do you realize how much time is left?”
“I can usually guess within the hour..”

(Maybe this isn’t the greatest LOCK)

It’s the holiday season and I must be sipping on that egg nog a little too hard. Somehow, I let the white rapper, Fetty Wop (that’s only funny if you’re up on current rappers and know old racial epithets for Italians) pass me in the standings. We have the same win loss record but he’s got more locks than I do. That’s such bullshit. Who came up with that anyway? I did? Oh...well...then let’s move on. How about Danny not being able to pick winner? The guy's a bum, a mooch, a lemon, a stiff. I wouldn’t trust him to sit the right way on a toilet seat. As a matter of fact, he’s so bad that I’m going against every one of his picks this week. If he likes the Pats, give me the Texans and the points. If he likes the points, give me the favorite. Whatever his lock is give me the other way. I don’t know why I haven’t been doing this all year, I’d be cleaning up.