Twice in a week I’ve had to rebut a questionable list of Jingles's. (**JB Note: It's possible Dan needs some sort of hobby, given how all-consumed he is with my blogs lately.**)  I mean, to have a list of greatest Star Wars characters and not top it with Darth Vader is LUDICROUS. The greatest villain in cinematic history, but he’s topped by the galactic equivalent of Larry from Three’s Company? NOT ON MY WATCH.

Never trust a man in a vest. You know who wears vests? Jerks.

8. WE WOULDN’T EVEN BE TALKING ABOUT THIS IF HE COULD SHOOT STRAIGHT

Han’s competition for best character ever would’ve been obliterated if the cocky prick could stay on target. He goes to save Luke during the first Death Star battle, and he fucking misses Vader. HE MISSES. He’s the best pilot in the galaxy (he says) but evidently that doesn’t include shooting.

The dude is macking hard on Leia, trying to get into the royal trousers and BOOM this happens. 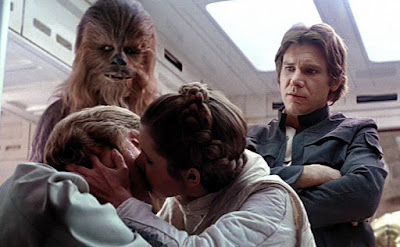 She chooses to suck face with another guy, her fucking BROTHER no less. And he looks on like the fool that he is. Luke essentially kicks Han right in the Dagobah System and there’s nothing the stupid fucking flyboy can do about it.

6. HAS AN ENTIRE ARMY SQUADRON AT HIS DISPOSAL ON ENDOR; FUCKS IT UP

Jesus Christ, Solo, what do you need, MORE MEN? I mean, it was a secret mission and YOU BLEW IT (ignoring the fact the Emperor knew about it cause it destroys my argument). The only thing that saved his ass is the goddamn Care Bears showed up and knocked out the Empire with a bunch of fucking sticks.

5. SINGLEHANDEDLY MAKES THE WORST DECISION IN THE ENTIRE ORIGINAL TRILOGY

You know what that decision was? 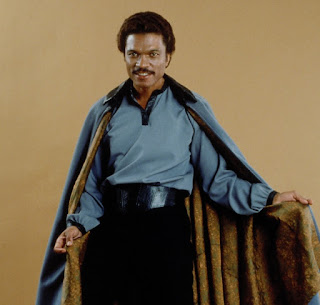 Yup, Mr. Colt 45 himself, Lando was Han’s old buddy, and Han went crying to him when he needed help from the big bad Empire. Which lead directly to...

4. THREEPIO GETTING BLOWN UP

And how! His choice of venue also leads to...

Which means he left his Jedi training early. Which leads into his goddamn hand getting cut off, and then finding out the most evil (and best) character in the universe is his father. Thanks a lot, Han.

This dumbass goes to his buddy’s house in Cloud City and then gets beat up and tortured by a guy in a Daft Punk mask.

Then he just lets them Elsa his body in a giant brick. In front of a broad! That he’s trying to nail! There’s nothing more emasculating than being frozen by a buncha dudes dressed up in plastic armor that can’t shoot straight and basically showing a chick upfront that you’re frigid.

Seriously, dude, shoot the lizard aardvark man before he gets a bullet off. It’s Cool Guy 101. What a stiff.
Posted by Justin Enuffa Ballard at 3:41 PM