Once more unto the breach, dear friends. Ya know, this year with the picks has not been good. Like any song playing on B-Cuddy’s car radio with the bass way too high, it stinks. So I must take solace in the important things in life. This picks blog? Pointless. No one cares about the useless choices of two bald guys and a handsome man making bad NFL picks. No, you know what the masses love? 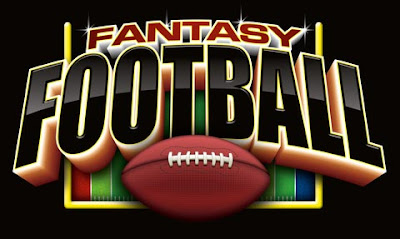 That’s right, fake football. And let’s talk about the league myself, Miggsy & B-Cuddly are in, shall we? Take a look at the standings. 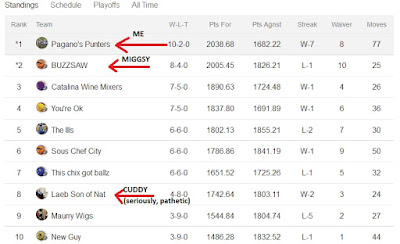 I mean, holy SHIT, did Brandon even know football was a sport when he drafted his team? I believe he thought he was drafting his fantasy women’s gymnastics team, a sport he is much more comfortable watching, and participating in thanks to his ample bosom. And Miggsy’s the biggest fraud in the league. This cracked out, corpsey-looking motherfucker (He’s so pale) changed his name to BUZZSAW cause he was cutting through everyone in the league...and has gone 3-3 ever since. He’s the Jeff Fisher of faux football, except Fisher has better breath. Meanwhile, I’m comfortably on my way to an unprecedented 8th Championship. So enjoy your picks, gentleman, and then go eat shit and die, you herpes weigh stations.


PHILADELPHIA @ NEW ENGLAND (-9) THE PICK - NEW ENGLAND
Sticking with the boys after a tough loss in Denver. Can’t blame refs and missed/bad calls when you’re O-Coordinater is calling the same shitty sideline pass 4 times in a row and not running the ball with less than 3 minutes left. Infuriating playcalling to end that game last Sunday. Yes, the Pats offense is running on fumes, but I think the defense is good for about 17 points with Bradford back behind center for the birds. Pretend Ryan Reynolds has looked flustered all year, and BB’s defense should confuse the hell out of the fake Green Lantern.

DENVER @ SAN DIEGO (+4.5) THE PICK - DENVER
The Brock Osweiler era has started. And I see no conceivable way Peyton gets his job back, unless this kid pulls a Sandusky or something. He’s just the better QB at this point. But that’s neither here nor there. I was just in Denver. Gorgeous town. Great boozing town. But JESUS WITH ALL THE WEED. Calm down people. The whole place STINKS. Everyone’s high all the time. The 7-11 lines are bursting with idiots and bags of Doritos. We get it, it’s legal. Now go get jobs. Christ.

DAN’S DYNAMITE PICK OF THE WEEK
ARIZONA (-6) @ ST. LOUIS THE PICK - ARIZONA
St. Louis is the only people on earth that didn’t think Case Keenum had a concussion. They may also be the only people on Earth that think they have a chance on Sunday. Zona is in the Zone-Ah (ZING). Nick Foles shouldn’t even be playing Pop Warner football right now, and he’s starting in the NFL. NEXT.

This has turned into a real foot soldier’s war. Me and Brandon, eyeball to eyeball. Now that’s fucking combat. The man in the black pajamas, dude. Worthy fuckin’ adversary. Whereas we have Danny, a fig eater, wearing a towel on his head trying to find a winner on a football card. This....this is not a worthy adversary.

Jacksonville Jaguars @ Tennessee Titans -2.5 PICK: JAGUARS +2.5
The Jags just beat this team by 6 two weeks ago. Am I supposed to believe that the Titans got better in two weeks? You’re fucking telling me they got 8.5 points better? Did Danny get better at humping in the last two weeks? The answer to all of these questions is a resounding no. Jaguar nation should be out in full force on the road for this one (There’s no such thing as Jaguar nation).


Denver Broncos @ San Diego Chargers +4.5. PICK: BRONCOS -4.5
I just happened to be in attendance last week when the Broncos took out my previously undefeated, defending Super Bowl Champion New England Patriots. While their win wasn’t crazily impressive (the officiating was particularly brutal, they did win nonetheless. Do you know what was impressive (beside my level of intoxication) was the play of their new franchise quarterback Brock Osweiler. His throws were on time while battling inclement weather. He had to peel himself off the snow-blanketed turf after several brutal hits that would have made lesser men pee their pants. He’s huge, 6’7”. He’s got a rocket for an arm. He took over from one of the greatest QBs to ever play the game. He’s got a smokeshow of a wife. Does any of this sound familiar? You’re right. It didn't sound like anything I’ve ever heard either. 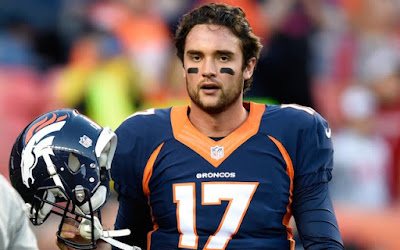 Miggsy’s Monster Lock of the week:
Carolina Panthers @ New Orleans Saints +7. PICK: PANTHERS -7
This spread could not be high enough, like Brandon at his uncle’s house. All stupid and giggly. This line a joke. New Orleans couldn’t stop a Pop Warner team from scoring on them at this point. The scoring levee has broken and the TD waters a flowing… too soon? Sorry.

I’d like to start this off with a moment of silence for Danny’s picks. He fought hard. But he’s in a distant 3rd place and he’ll probably just mail it in now... 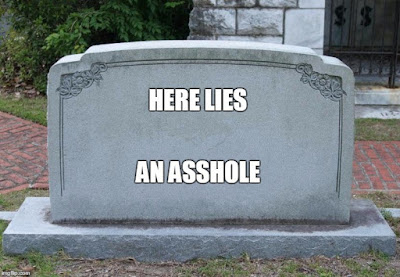 Enough about that stiff. Looks like I’ll just be trading punches with ol’ Shiny Head. I wonder what Miggsy uses to buff out any spots on that melon? You should see it, it’s like a mirror. Hey Miggsy, go get ya fuckin shine-box. On to the picks.

Atlanta @ Tampa Bay (-1) – The Pick: BUCS -1
I’m going against Matty Melting Ice maybe for the rest of the season. The dirty birds benefited early from a creampuff schedule and some lucky breaks. But their true colors are showing now. Ryan’s really into the giving season lately as he continuously gives the football to the other team. The Bucs defense should get a couple early Xmas presents. Speaking of Xmas presents, anyone have a line on a good spot for scarfs?

Carolina (-7) @ New Orleans – The Pick: PANTHERS -7
The end of the Sean Payton era is upon us. Also, the GM probably needs to go too. The Who-Dats stink more than a Scotty Pickles' sock. They’re in the midst of a 3-game losing streak with losses to the Titans, Skins, and Texans. YIKES. What’s worse is that they might have the worst cap situation in the league. Don’t be shocked if in the offseason there are rumblings about releasing Drew Brees. You heard it here first. 7 points is a lot to give on the road, but the Panthers aren’t a fluke. They’re better than the Saints in every aspect. I’m expecting a blowout.

BRANDON’S BOOM PICK OF THE WEEK:
Arizona (-6) @ St. Louis – The Pick: ZONA -6
I’ve been on the wrong side of Rams picks all year, so I’m sure they will pull some miracle cover outta their ass on Sunday. But on paper, the Cardinals should really have no issues. The Rams haven’t played good defense in a month. And on offense, they have nobody other than Gurley. Teams are stacking the line just daring them to throw. Which they can’t, because Nick Foles looks and plays like Napoleon Dynamite. 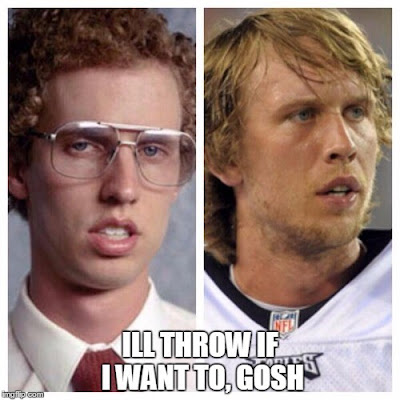