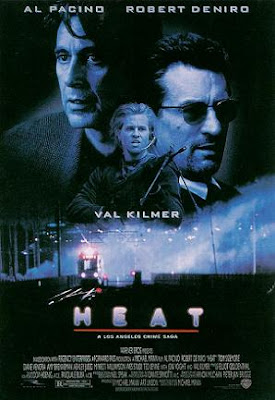 Twenty years ago (20!!), one of the best heist movies of all time was released. Michael Mann’s Heat has many things going for it. Superb acting, the first face-to-face meeting in film of legends/Oscar winners Robert DeNiro and Al Pacino, and incredible action scenes. It will, of course, be remembered mostly for this.

The bank robbery and subsequent shootout scene that takes place afterwards is BANANAS. It’s one of the all time great action scenes ever put to film. But I’m getting ahead of myself.

The film follows lifetime criminal Neil McCauley (DeNiro) and his gang (Val Kilmer, Tom Sizemore and Danny Trejo) as they plan a heist and are pursued by obsessive cop Vincent Hanna (Pacino). Along the way there are romances, breakups, and many nuanced acting turns by this veteran thespian group.

The movie is much deeper than a bank heist flick. That’s part of what makes it unique and so eminently rewatchable. There’s so much to take in each time you view it. The characters are so true to themselves throughout the whole movie. The long run time (170 minutes) flies right by. It’s honestly a movie I wish were twice as long, as I could go on watching these characters figure each other out for hours on end. There’s so much to love about this movie. Even the soundtrack is awesome.


But that shootout...man oh man. Choreographed perfectly, all the actors wield those machine guns like actual pros. Kilmer’s shoot and reload stance looks like something out of a training video.

Part of the appeal for me is the sound effects during this gun fight. It’s not your generic, movie gun sound effects, it’s loud, deafening gun shots. You can hear the echo as they rattle around the glass buildings of downtown Los Angeles. Director Michael Mann had planned to add audio in post-production. But when he tried, he didn't think it sounded real enough, so he kept the audio as-is. And it really makes the scene. I recall seeing this at a midnight showing with my Dad years ago, and both of us being astounded at the audio of this shootout. Just amazing.

A true classic revisited twenty years later, Heat stands out as the perfect melding of dialogue, acting and action. One of my all time favorites. I’ll probably set aside three hours tonight to check out this old friend.
Posted by Justin Enuffa Ballard at 11:51 AM