This week I happened to stumble upon a super old-school match on YouTube (one of many actually).  How old-school?  Try 69 years old-school.

This match is from June 21, 1950, pitting NWA World Champion Lou Thesz against the original "Nature Boy" Buddy Rogers.  As with all Title matches of the time, this was 2 out of 3 falls with a sixty-minute time limit.  The bout took place at Wrigley Field and was later broadcast on the Wrestling from Chicago TV series. 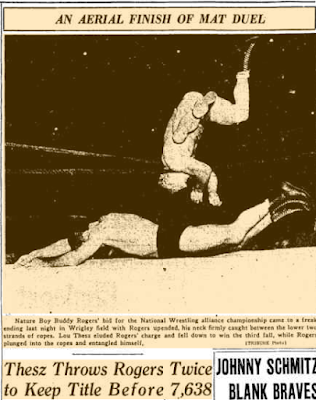 Watching this match was a delightful little time-traveling experience.  I'd never seen any complete Thesz or Rogers matches, and certainly not from their respective prime years (WWE needs to add some pre-1975 content to the Network).  This match actually took place only two years after Thesz first won the NWA World Title, during his six-plus-year reign.  The grappling style on display here was very fluid and athletic, and in fact much more diverse than I would've expected from that period.  During the first fall both guys concentrated on wear-down mat holds like side headlocks and armbars (Thesz even used a keylock at one point), but as the match wore on the moves became much more high-impact.

Rogers dominated most of the first fall, holding a standing headlock and frequently throwing punches to Thesz's face while obstructing the referee's line of sight - a brilliantly simple heel tactic.  After sixteen minutes he hit his finisher, the piledriver, which in this case looked just like the variation Mick Foley later used.  This surprised me actually, given how different Foley's overall style was from Rogers'.  Even more amazingly this wouldn't be the only move Foley lifted from Rogers' arsenal. 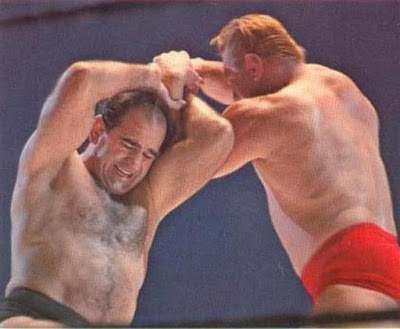 The second fall was much shorter but Rogers controlled most of this as well, once again relying on barely-covert punches to the face, to the point of Thesz's forehead bleeding hardway in multiple places.  Finally the referee held back Rogers' arm, allowing Thesz to escape and apply an Airplane Spin into a slam, good for the second fall.

The third fall was much more back and forth, but after five minutes Rogers hit Thesz with a series of running tackles.  Thesz then ducked another attempt, leaving Rogers to fly headfirst into the ropes and become entangled by the neck (The other Rogers move Foley would routinely use decades later).  The rules in 1950 were different though; instead of the referee being forced to free him, Rogers was counted down and the match was awarded to Thesz.

All-in-all this was a really fun retrospective on how a wrestling main event looked and felt in 1950.  The emphasis on the sports aspect was much greater than in today's North American product; the action took place almost entirely in the ring and the babyface wrestlers relied on actual grappling while the heels often resorted to less graceful punches and kicks.  While the movesets were simpler and even quaint at times, this match still featured rugged, believable action between two masters of the form.  Thesz was of course the consummate shooter, while Rogers was an incredibly gifted showman who oozed arrogance.  I highly recommend anyone interested in the history of pro wrestling to sample some of these old bouts (The video link for this one is below) to get a look at where the business came from.  Really fun stuff!