And here I was thinking we might finally have a WrestleMania card with no fifty-year-olds on it.  Chrissake...  But first the good news. 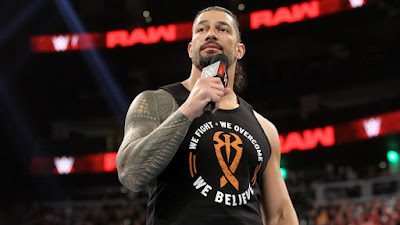 Roman Reigns announced last night that his leukemia is in remission and he's ready to return to the ring.  Whether you were a Reigns fan prior to his illness or not, this is fantastic news and I'm glad to see the fans have fully embraced him.  It's kind of ironic and sad that despite WWE's best efforts over the years, what finally got Reigns over as a hero was his own real-life struggles.  I guess it shouldn't be that surprising, since wrestlers being themselves is almost always what gets them over, not Vince's scripting (I'm still waiting for Vince to figure this out again).  I just hope the company has the sense to continue letting Roman just be who he is; when he's allowed to speak from the heart he's effective and very likable.

I also hope the company doesn't feel compelled to simply shove him into the Universal Title match at WrestleMania.  That would seem forced and would actually risk damaging the audience's newfound love for the man.  Let Seth Rollins have his well-deserved moment against Brock Lesnar, followed by a long, healthy title run.  Meanwhile Reigns can feud with someone else for a while and maybe they eventually build to Roman vs. Seth in a year.  We never really got a proper version of that feud before anyway, and with Dean Ambrose leaving it will no longer be this awkward two-against-one situation, like in 2014-15 when Roman more or less had to ignore that Seth betrayed him.  If the company doesn't book itself out of a successful Reigns babyface character, Seth can turn on him down the road and it can be a white-hot Hogan vs. Savage-type feud.  Just let things play out organically.

Now for some complaining.... 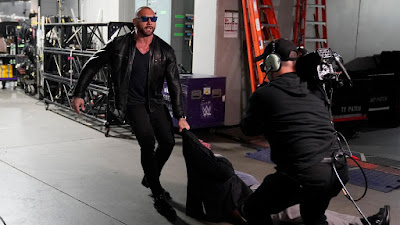 A month ago I was very confident (and pleased) that we'd finally be getting a WrestleMania without either Triple H or The Undertaker on the card.  It would be the first such WrestleMania since 1994, which of course was 25 years ago.  Twenty-five years ago.  Let that sink in for a minute, I'll wait.....

Hunter was out of action with a torn pec (thanks to a tag team match where the four participants' combined age was over 200), and Taker seemed to have moved on from his in-ring career, taking independent bookings for signings and personal appearances.  Super!  We can finally move on from 'Mania being a big nostalgia wank-fest and get back to what it was originally intended to be: the culmination of the year's feuds and storylines that showcases the CURRENT product in its most widely appealing form.

Not so fast Justin.  Triple H hasn't missed a WrestleMania in 12 years and he ain't breaking that streak now.  Last night Dave Batista returned to attack Ric Flair and bait Hunter into accepting his offhand challenge from a few months ago.  Now, the angle was well executed, I'll give credit to all involved there.  And at least Dave is a heel again.  But here's a fundamental question: why would Batista feel the need to challenge a guy he beat three times in a row in 2005?  From a character standpoint what sense does that make?  Dave's original comment to Hunter was "You've beaten everyone in this business....except me."  Uh huh.  And you beat him three times.  So what exactly are you trying to prove 14 years later?  Why do I as a fan care about evil Batista going for a fourth win over Triple H (who by the way has been a heel or at best a tweener since 2013)?  Why should I be even remotely invested in this match, from an emotional standpoint?  Because he beat up Ric Flair?  So did Triple H, coincidentally in 2005.

Also I've pointed this out before: in 1996 Vince McMahon lampooned the "advanced" age of Hulk Hogan and Randy Savage (42 and 43 respectively at that point) with a satirical Geriatric Match on the WrestleMania 12 pre-show.  But here we are 23 years later and Triple H and Batista, combined age 99, are set to do battle on the industry's biggest stage.  So, how old is too old for this company nowadays?  55?  60?  65?  Keep in mind also, Vince may ask Taker to wrestle on this stupid show, just because he's pissed Mark is taking independent bookings.  This is like a child who isn't interested in playing with a toy until he sees someone else playing with it.  "Gimme that, it's mine!!!"

Will there ever be another WrestleMania PPV that doesn't involve at least one nostalgia act in one of the top matches?  The answer, apparently, is no.

Posted by Justin Enuffa Ballard at 11:09 AM