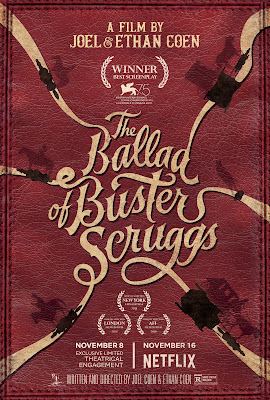 As a huge longtime fan of the Coen Brothers I was stoked for their latest, a film I could watch on Netflix no less (no need to book a babysitter!).  True Grit, the Coens' previous foray into the Western genre was a rousing success and ranks as one of my favorite entries in their filmography, so The Ballad of Buster Scruggs seemed like a promising venture.  The film is an anthology of six unrelated narratives that plays out like a book of short stories and stars Tim Blake Nelson, James Franco, Liam Neeson, Tom Waits, Zoe Kazan, Brendan Gleeson and a host of others.

I was drawn in pretty quickly by the first story, a tongue-in-cheek, violently amusing piece about an accomplished gunfighter/singing cowboy (Nelson as the title character) who speaks cheerfully and eloquently but has no qualms about coldly murdering anyone who dares insult him.  This story was quite promising and felt like a classic Coen exercise in morbid comedy.  And then it was just over.  Right when are getting interesting, the tale comes to a screeching, premature halt, and we move quickly to the next story.  And that sums up the biggest problem I have with this film.  None of the chapters are given adequate time to explore the characters or plot elements long enough to really become compelling.  Each story either feels rushed to its conclusion or just kind of empty.

The second story involves a bank robbery gone wrong.  The bandit (James Franco) finds himself at the end of a rope, only to escape and then find himself at the end of another rope five screen minutes later.  Things happen in most of these stories that ultimately don't change the outcome.  Maybe that was the theme?  Death is imminent and any escape from it is only temporary?

The third, and most depressing chapter involves a traveling show that consists of a quadraplegic who delivers famous monologues and historical speeches.  Liam Neeson stars as the show manager, Harry Melling as the talent.  This rather repetitive piece depicts their daily routine and their dwindling crowds, building to a very morbid climax.  There's a good idea in here somewhere but the story ultimately feels one-note.


That can also be said of the fourth story, starring Tom Waits as a lone prospector digging for gold along a river bank.  Were it not for Waits' natural onscreen charisma and the picturesque outdoor setting this story wouldn't have much going for it at all.  Most of this episode consists of Waits shoveling dirt into a pan and sifting for nuggets, trying to narrow down the source of the gold.  That he's able to hold our attention in what is almost a one-man show is striking.

The fifth segment feels the most complete; Zoe Kazan stars as a young woman wagon training to Oregon with her brother to hopefully find fortune in the west.  The brother dies of cholera and the woman has to decide how to proceed.  She and one of the train leaders hit it off and he asks her to marry him, agreeing to assume the debts left by the brother.  Then a Comanche attack throws everyone's plans into upheaval.  Of the six stories this would've lent itself best to a full-length film.  Zoe Kazan and Bill Heck have strong chemistry as the two leads and for the first time in the film I found myself rooting for someone.  I'd have liked to see more of this piece.

The final story is the weakest - we're in a carriage with five assorted characters having philosophical discussions about the nature of man, whether we're no more complex than animals or whether peity makes us virtuous.  We then discover that two of the passengers are bounty hunters whose cargo atop the carriage is a target they had to kill to bring to justice.  And well, that's it.  Nothing else happens in this story and I was baffled it was chosen to close the film.  Aside from the aforementioned "death is inevitable" theme it escaped me how this tied the stories together or what it was doing here.

The Ballad of Buster Scruggs showed a lot of promise early on.  It's well-acted, the script has that signature Coen flair for language, and there is some dark humor.  But none of the stories is fleshed out enough to make me care much about what happens, and in some cases almost nothing does.  This film would've worked better if they'd chosen the three most promising pieces (I'd go with the Buster Scruggs story, the Tom Waits one, and the Zoe Kazan one) and expanded each of them to forty minutes.  Or perhaps this should've been turned into a TV series with each chapter a 45-minute episode.  Rushing through six narratives in two hours just felt skimpy to me.  The result is a pure exercise in style without much apparent purpose.