It's time once again for Mike Drinan and I to give you our Oscar recap thoughts, so let's get to it... 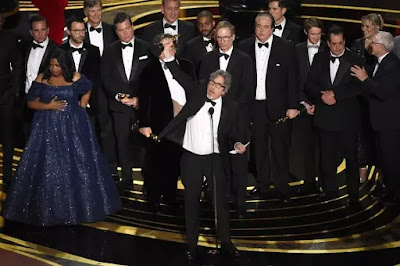 Justin: The 91st Oscars are in the books, and there weren't many surprises.  Most of what we figured would win did, and the Academy predictably went the safe route with the Best Pic award, with Green Book taking home the big one.  Before we get our hands dirty with our gripes, what did you think of the show overall?


Mike: Overall, I thought it was a very enjoyable show this year. I loved the no host thing and hope they continue it. It made the night more about the ceremony than about the host and what they're going to do (i.e gimmicks, jokes, musical numbers, etc.) and it made the ceremony move right along. Even though the show was still over 3 hours long, it was only over by 19 minutes as opposed to years past ending around midnight. The acceptance speeches are still painful to sit through, for the most part, especially the three winners for Best Hair & Makeup and their shared piece of paper. Good lord! Coordinate people! Talk out these ideas first. However, Olivia Colman's speech was the best speech of the night. I think my only gripe about the show overall is the opening montage of films moved a little fast like they had to rush through it. For a night that is meant to celebrate the year in film, I thought they could've put a little more care into that. Other than that, I thought it was a really good night for the Academy as far as the ceremony goes.


Justin: I was torn on the no-host thing.  I agree it allowed the show to move along faster, but I feel like there still needs to be a host to intro the show and sign off at the end.  Maybe split the difference.  Julia Roberts awkwardly saying "Welp, I guess that's it, good night!" was a really odd way to end it.  I loved Colman's speech, easily the highlight of the evening.  She's adorable.  Other highlights for me were Gaga-Cooper (Do they have tangible chemistry or what?) and Rami Malek's speech.  I would've liked to see the Thalberg award presentation, especially since Kathleen Kennedy and Frank Marshall won it - Kennedy is the first woman to win that award.

Now, as for the big winners....  I haven't seen Green Book yet (or Roma for that matter), so I can't comment totally intelligently on its merits, but from what I've read this felt like the Academy taking the non-controversial route YET AGAIN.  There were two Best Pic nominees that dealt with race relations in America and the voters rewarded the White Version.  I gotta say that bugs me on a number of levels.  BlacKKKlansman is a challenging, unapologetic look at American racism, with very clear parallels showing how relevant the issue still is today.  Green Book seems to essentially be saying "Yeah, things were fucked up for a while but it's alright now."  Guess what - it ain't yet.

I'm not sure what the Academy has against black directors, but Spike Lee is the fifth nominated black director in the last decade to lose in that category (the first four were Lee Daniels, Steve McQueen, Barry Jenkins and Jordan Peele), despite two of those directors winning Best Picture later in the night.  Am I crazy or does that seem really wrong?  I'd opine that Best Director and Best Picture should almost always go to the same film, but especially in the case of 12 Years a Slave for example, which was such a flat-out masterpiece.  McQueen lost that year to Alfonso Cuaron for Gravity of all films, and three years later Barry Jenkins (Moonlight) lost to Damien Chazelle for fucking La La Land.  Moves like these feel like the Academy is going out of its way to preserve that particular glass ceiling.  And now Spike Lee (who did at least win his first-ever Oscar for Best Adapted Screenplay) had to lose to another movie about someone driving somebody somewhere (Do the Right Thing lost to Driving Miss Daisy in the Screenplay category 29 years ago).  I dunno, I think he has every right to be pissed.

Mike: For me Green Book's win was more about rebuking Netflix than it was about Green Book as a film. I haven't seen either film as well but I feel like I know how Green Book is going to play out and end. There have been plenty of these kinds of movies that have already been made. I agree with you that the Academy took the safe way out by going with Green Book. As much as I agree with your comparisons between BlacKKKlansman and Green Book, I didn't feel either was worthy of Best Picture. Roma had that feeling for me which is why I believe it was the old guard of the Academy trying to keep the way films are distributed and shown and not submit that Netflix and other streaming platforms are the future.

There were a few highlights for me during the show and you mentioned a couple. Lady Gaga and Bradley Cooper were magnificent. From entering the stage from their seats to snuggling up close at the end of the song, they have perfect chemistry together and the performance was spot on. Rami Malek's speech was great as well as Mahershala Ali's, who spoke of his grandmother being in his ear. I loved when Barbara Streisand came out to introduce BlacKKKlansman and mentioned her and Spike are both from Brooklyn with Spike immediately hollering out. Samuel L. Jackson's reaction to Spike winning his Oscar was fantastic and Brie's beaming smile directed at Spike for his win was great too. :) (I love her and had to fit her into this)

Since you saw Bohemian Rhapsody, what's your take on them winning the sound awards while they lip synced in the movie? Fair to criticize the win or who really gives a shit?


Justin: I mean, if your only goal is to rebuke Netflix, at least pick a movie that people will still be talking about in a year.  Green Book seems like the Crash/Driving Miss Daisy/Shakespeare in Love/Hurt Locker/Spotlight kinda movie that comes and goes, and no one will ever include it on their list of favorite films.  If you don't want Roma to take it, either reward Klansman's audacity or go with a crowd-pleaser like A Star is Born.  Green Book feels like the Academy patting themselves on the back for inclusivity while not wanting to offend anyone.

As far as Rhapsody winning sound awards?  Eh, I'm indifferent.  As I said in the preview piece, I'd have given A Quiet Place the Sound Editing award for its creative use of silence to heighten tension.  I definitely would NOT have given BR Best Editing, though most of my issues with it are in the screenplay department.  But Vice or Klansman should've taken Best Editing.


Mike: If they went with A Star Is Born I would've taken exception to it being the fourth remake of a film winning Best Picture, but I get what you're saying. It's their M.O. to go with that kind of movie. I don't see Green Book having a long lasting shelf life, or great rewatchability (not a word) so it'll go down as another Oscar mistake. Not as bad as Shakespeare in Love over Saving Private Ryan, but notable.

A Quiet Place should've gotten Best Sound Editing. A friend of mine commented that the sound editing in that film was the third lead, and he's right. Should've gone to A Quiet Place.

Spider-Man wasn't a surprise considering the near universal praise it received. Since Free Solo won Best Documentary I've been watching videos about that guy and learning about climbing that it's a film I definitely want to see. I have a fear of heights so there'll be a great amount anxiety and fear watching it but I bet the experience is incredible.


Justin: ASIB being a remake didn't bother me (though I haven't seen the three previous versions).  Giving a remake Best Picture isn't that different to me than giving a film based on a book or other medium that award.  What matters is what they do with the material, and Cooper made an excellent movie with great performances.

Shakespeare in Love beating Ryan still pisses me off to this day.  It's one of those all-time Oscar blunders, as is Gwyneth Paltrow beating Cate Blanchett that year.

Well it wasn't the most fun I've had watching the Oscars I guess, but it wasn't a bad way to spend an evening either.  I still have a few films to catch up on but 2018 was certainly a competitive year for film and numerous films made by people of color were recognized, so I guess that's a small victory.  I just wish the Academy would grow a pair when it comes to the top two categories.


Mike: Yeah, like I said, overall I enjoyed the show more this year more than previous years. They still have some work to do to make it more enjoyable, whatever it may be. The Academy still needs to cut the shit even though the changes they made in terms of membership did yield some encouraging results, like you pointed out. We will see how much further they will progress next year.


Well that about does it.  Mike smoked me in the predictions, going 8/11 to my 5/11.  Terrible.  Anyway, thanks for reading - join us on Facebook, Twitter, MeWe and YouTube!