Well it was no instant classic by any means, but the 2019 Elimination Chamber PPV was inoffensive and refreshingly short, with two Chambers that were, at worst, decent (One was very good in fact). 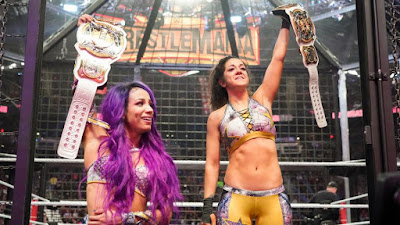 The show started and ended well, opening with the Women's Tag Team Championship Chamber.  This bout was messy in spots and suffered from not enough credible teams (Alexa & Mickie should've been involved), but it revved up well toward the end and the crowd bought into the importance of it all.  Sasha Banks & Bayley began and ended the match with Mandy Rose & Sonya Deville, and the two teams gelled pretty well.  Nia Jax & Tamina got some good dominant spots, eliminating two teams, The Riott Squad got some moments to shine, particularly in the spot where they each dove off a chamber pod onto separate opponents, The IIconics came off as suitably overmatched (I've heard complaints that they got in too much offense, but it was after a huge Tower of Doom spot, so it didn't bother me), and Naomi & Carmella were essentially punished for their respective scandals this past week.  Kinda odd.  In the end of course it came down to the two starting teams, who had good some back-and-forth before Sasha finally locked in the Bank Statement (using one of her legs since her shoulder was injured) for the tapout on Sonya.  This felt like a big moment and a fitting start to this new championship.  Hopefully the company won't cheapen it by bouncing it all over the place.  Sasha and Bayley need a long run to establish this title as something valuable.  An entertaining Chamber match with the right winner.  *** 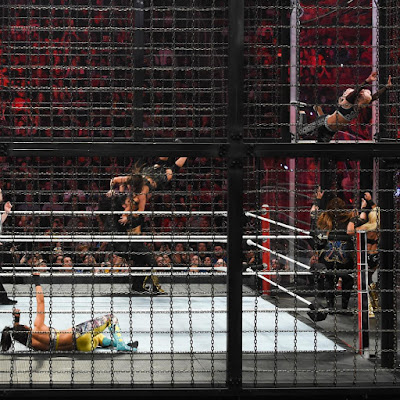 Next up was the Shane McMahon Train Wreck Show, as he trotted out his usual death-defying spots that will one day surely result in his untimely de-meeze.  Seriously, the guy's 49 years old, looks horribly out of breath most of the time, and turns purple about two minutes into every match.  Stop it.  Anyway, this match was also messy but kept me entertained for a while, and I was pleasantly surprised to see The Usos win (though the finish was goofy - how does Miz hitting his finisher lead to *him* getting pinned?).  Can't help but think this title change was done to try and coax Jimmy and Jey to stick around when their contracts expire shortly.  Now we get to build to Shane-Miz over the next seven weeks.  For joy...  **

The next three matches were various varieties of throwaway, starting with Finn Balor getting killed by Bobby Lashley the whole match, only to catch Lio Rush one-on-one at the end and win the Intercontinental Title.  I'm happy Finn finally has gold, but did they seriously need to make it look like he couldn't hold his own against Bobby and only won because he pinned Lio?  Post-match Lashley turned on Lio, but it was okay because 24 hours later they were back together with no explanation.  This product may not be WCW 2000 bad, but some of their creative decisions are.  Christ.  *1/2

Ronda Rousey destroyed Ruby Riott in 90 seconds.  I'm not saying Ruby deserved a 13-minute back-and-forth contest here, but maybe 4-5 minutes?  I dunno, this just seemed like a waste of time.  I get that Ronda's the one they're building, but would it have hurt her for Ruby to get in just a *little* offense?  *1/2

Post-match Charlotte (who'd been watching from ringside) got in Ronda's face but was attacked with crutches by Becky Lynch, who beat a rain check into her and then proceeded to do the same to Ronda (Is there a safe way to pretend to bludgeon someone with a crutch?) 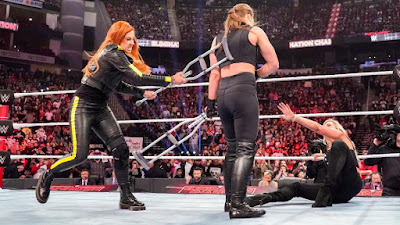 Fuckin' hell with this Baron Corbin shit.  Why in the FUCK is he even on PPV, let alone getting wins over top stars?  And yeah, it took three guys to put away Braun Strowman, but this is a guy with whom Vince pulled a bait-and-switch one month ago to avoid having him lose to Brock Lesnar again.  Apparently losing a third match to the superhuman Brock would be more damaging than getting pinned by CORBIN?  Piss off with this.  Braun is yet another guy whose stock keeps falling the longer he's on television.  Ya know, the opposite of how it's supposed to work. *

Thankfully the main event saved the show, as Daniel Bryan, AJ Styles, Samoa Joe, Kofi Kingston, Jeff Hardy, and Randy Orton put on a helluva good Chamber match.  Bryan and Joe started off (and I was filled with glee), stiffing the shit out of each other with chops.  When are we gonna see a PPV match between these two?  And why does Vince hate Joe so much?  I was hoping to see AJ enter next so we'd have a triple threat of ROH legends, but Kofi was the third man in, much to the delight of the crowd, who LOVED Kofi here.  AJ was next and eliminated Joe with the Phenomenal Forearm (seriously, why does Vince hate Joe?), and then Jeff Hardy entered, nearly stopping the show with a Swanton off the top of the pod onto AJ, who lay face-down on the top turnbuckle.  One of the crazier spots I've seen in some time.  But Bryan quickly eliminated Jeff with the running knee.  Then Randy Orton entered and took AJ out with an RKO, but fell to Kofi Kingston's Trouble in Paradise.  The final twelve minutes of this match were fantastic, as Bryan and Kofi put on (hopefully) a preview of what they'll deliver at Fastlane if given the chance.  They each hit their finishers, Kofi kicking out of the running knee and Bryan countering TIP with a cradle for a near-fall.  Finally they ended up on top of a pod, Kofi knocked Bryan off and went for a splash but hit nothing but canvas, and Bryan leveled him with a second running knee for the win.  The audience then gave Kofi a huge ovation for nearly upsetting the champ.  We gotta see this match at Fastlane, fellas.  Damn good Chamber.  **** 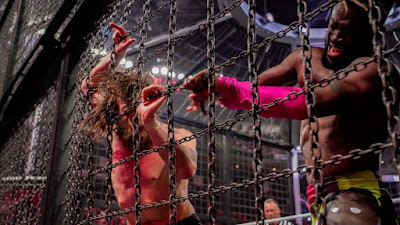 So the two big matches delivered, most of the undercard didn't.  But this was an okay PPV.  Not much more to say than that, really.  It was fine.