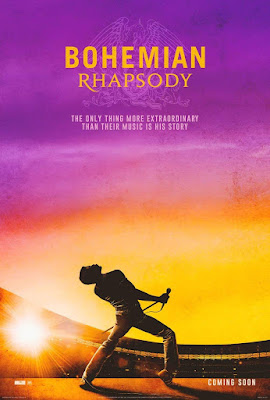 So what are we to take away from Bohemian Rhapsody exactly?  That Queen were a popular, groundbreaking band with an all-time great frontman?  We already knew that.  That Freddie Mercury was a wholly unconventional rock star who loved to party and had sex with a lot of people?  Yeah, we knew that too.  Or, are they implying that Mercury took his "lifestyle" too far and the band had to "rein him in," in order to be able relate to him again?  By all historical accounts Brian May, John Deacon and Roger Taylor weren't bothered in the least by Freddie's sexual orientation or his expression thereof, but in this film they're visibly uncomfortable with it seemingly at every turn.  And yet the screenplay isn't courageous enough to explore Freddie's personal life in any three-dimensional fashion, instead tiptoeing around all of it.

Were the filmmakers scared to deal with this material, lest it frighten away mainstream audiences?  Were Brian May and Roger Taylor not willing to fully commit to a tell-all about their bandmate, lest Queen fans come to the "shocking" realization that Freddie wasn't perfect?  This film just feels like it couldn't decide whether to be a Mercury character study or a band biography, and it ends up not really being either.  Mercury's personal life is explored only on the surface, and the other three band members are barely given characters at all.  Even his long-time relationship with Mary Austin and his later one with Jim Hutton are mostly glossed over, while his personal assistant Paul Prenter is presented as a scheming leech.

Singlehandedly carrying the film, Rami Malek gives a very strong performance, the only thing about this film that deserved an Oscar nomination (apparently Bohemian Rhapsody is this year's Gladiator in terms of being over-nominated).  But imagine what he could've done with Mercury's final years, something the script omits completely, instead jumping from the triumphant Live Aid performance to a closing title informing us that Freddie died six years later.  This reeked of the filmmakers simply not wanting to get their hands dirty exploring real dramatic heft, like the goal was to enhance the Queen brand rather than tell their (fascinating) story.
On top of this, all the scenes dealing with their creative process are paint-by-numbers tripe, full of hackneyed lines like "We're pushing boundaries and crossing genres!" and "No radio station is going to play a six-minute song with opera in it!"  These scenes are written as though everyone involved knew ahead of time that "Bohemian Rhapsody" was destined to become an all-time genre-bending classic, when I always got the impression they were just experimenting with the format, hoping for the best.  Either talk about the creative stuff or don't; half-assing it feels joyless and obligatory.

Much has been made of the film's historical inaccuracies; "We Will Rock You" is shown being recorded in 1980 when it actually came out in 1977, Mercury displays AIDS-related symptoms prior to the 1985 Live Aid concert when in fact he wasn't diagnosed until 1987-ish and didn't tell the band until '89.  But these are secondary to the film simply not being a compelling or even daring account of one of the more interesting and unlikely iconic rock bands of all time.  Instead we're left with a safe, superficial skim over the band's history, carried only by a strong central performance.  Originally Sacha Baron Cohen was to play Mercury and envisioned the film as a warts-and-all, R-rated rock n' roll biopic.  I'd have liked to see that film.  This one makes Oliver Stone's The Doors look like a masterpiece by comparison.  The more I think about it, the less I think of it.

Posted by Justin Enuffa Ballard at 10:29 AM