Welcome to Top Ten Things, here at Enuffa.com!  Today I'll be talking about the WWE's resident "rock star," the Japanese phenomenon and the King of Strong Style, Shinsuke Nakamura!

Former NJPW headliner Nakamura made his long-awaited WWE debut in April 2016 and had a successful NXT run before joining Smackdown a year later.  Since then he's become a fixture on the blue brand, winning the 2018 men's Royal Rumble and rekindling his old rivalry with AJ Styles.

Nak is far and away the most charismatic wrestler in the world, oozing a mesmerizing rock star swagger (He cites Freddie Mercury and Michael Jackson as personal heroes) and delivering every wrestling maneuver in a completely unique, sensationally dramatic way.  His wrestling style is mostly striking-based, playing off his brief-but-successful MMA career, and involves heavy use of knee strikes and kicks.  His finishing move, the Kinshasa (formerly the Boma Ye), is a simple-but-devastating running knee to the jaw that has leveled dozens of opponents.  While his moveset may seem simplistic and unspectacular, it's Nakamura's delivery and his infectious, larger-than-life magnetism that makes him so captivating to watch.  He executes every move with complete attention to detail and nuance, to the extent that one can't help but say, "I've seen that move done before but never quite like that."  In an odd way his smartly-worked style reminds me of a Randy Savage.  It seems like he's doing much more than he is, and the storytelling aspect is so strong it makes the whole match sizzle.

American fans are largely new to Nakamura's incredible talent, but prior to arriving in America he built a stellar resume in New Japan, racking up dozens of Match of the Year-caliber performances.  Here now are my ten favorite Nakamura bouts.... 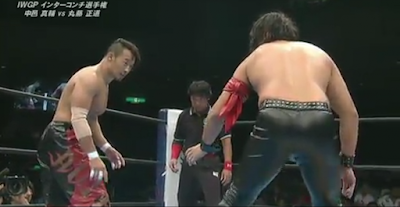 The IWGP Intercontinental Champion vs. The Ace of Pro Wrestling NOAH.  This match had some of the most innovative offense I'd seen in years, as the two spent several minutes grappling and countergrappling.  I could've watched Nakamura and Marufuji feud for months - that's how well they worked together, assembling a 16-minute barn burner that would've been Match of the Night on any show not headlined by Okada vs. Tanahashi.

The semi-main event of the excellent WK7 pitted Chaos stablemates against each other for the Intercontinental Title.  What a unique, fascinating match this was.  As pro wrestling/MMA hybrids go, this was about as good as it gets.  It kicked off with totally credible ground grappling (to be expected given both of these guys were MMA fighters) which then led to stiff wrestling offense (At one point Nakamura ran into a vicious knee to the face and I can't believe he wasn't legit knocked out).  Sakuraba dominated by working Nakamura's arm, but Nakamura fought through and managed to hit the Boma Ye for the win.  This bout was just about perfect for its spot on the card. 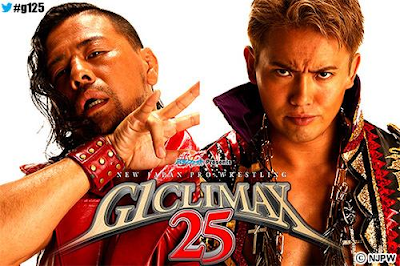 The rematch from 2014's fantastic G1 Final was nearly as good as that match.  This had a serious big fight feel and after a methodical feeling out process in the first half, Okada and Nak pulled out all the stops in the second half.  After failing to put Okada away with the Boma Ye, Nakamura got an unexpected armbar submisson win, decisively beating his Chaos brethren and catapulting him into the Finals. 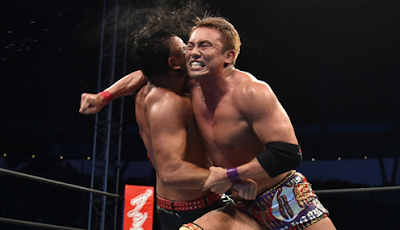 The 2014 G1 Climax all came down to the co-leaders of the Chaos stable, who waged an intense, action-packed 23-minute war.  Okada had recently dropped the IWGP Title to New Japan's newest star AJ Styles, and the story of this G1 was Okada's journey, clawing his way back into title contention.  In the closing moments Okada defiantly leveled his stablemate with repeated Rainmaker clotheslines, putting an exclamation point on his tournament win, and completing a masterful bit of storytelling. 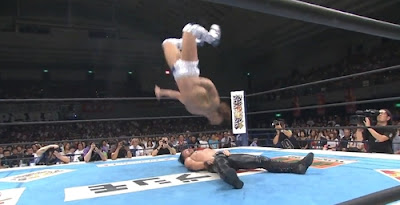 One of my favorite NJPW pairings, Nakamura and Ibushi seemed tailor-made to wrestle each other.  Nakamura brought the arrogant heelish bluster, while Ibushi provided the death-defying aerial maneuvers and gallant underdoggery.  Together these two remind me a little of Savage vs. Steamboat.  This bout was I believe their first meeting, and it was a bona fide Match of the Year candidate full of molten intensity and insane counters.  Ibushi absorbed colossal sums of punishment but eventually fell to the Boma Ye knee.

Most fans unanimously praised the AJ Styles-Minoru Suzuki match as the classic from this show (and rightfully so, it's an incredible bout), but for me the Nakamura-Ishii match stole the show (and the tournament).  The two Chaos allies worked up an incredible display of strong style strikes and counters.  Both men threw everything they had at each other and neither would acquiese to defeat.  Nakamura finally finished Ishii with multiple Boma Ye knees, capping off an unbelievable match. 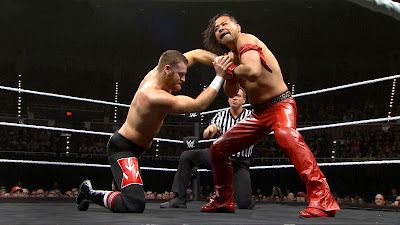 Nakamura's NXT debut was for many people (including me) the true main event of the evening.  From the first five seconds of his entrance Shinsuke Nakamura had that crowd on the edge of their seats, wielding his unparalleled charisma like a broadsword.  Seeing this New Japan veteran in a WWE ring was absolutely surreal.  Nak and Zayn gelled perfectly, delivering a twenty-minute tour de force that easily outclassed every other WWE match in 2016.  By the end both men were exhausted, and Nak finally hit his kinshasa knee strike for the win.  Post-match a bloodied Nakamura shook Zayn's hand and left Sami to enjoy his NXT farewell moment.  This match was all kinds of awesome. 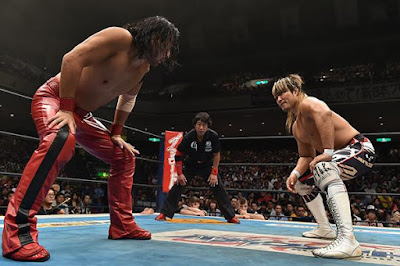 Nakamura and Tanahashi were for years the #1 and #2 guys in New Japan, and they would come together every so often whenever a big main event was needed.  I'd seen these two wrestle half a dozen times or more prior to this match, and it blew away all their previous work.  Going into this I likened the Nak-Tana rivalry to Shawn Michaels vs. Bret Hart, where all the ingredients were there for consistent five-star matches but somehow they never quite had one.  But this match tossed all that out the window as the two masters wove together an absolute masterpiece.  The drama and artistry on display here was electric and I couldn't believe some of the near-falls they put together, a few of which drew from me an audible "Come on!"  Just thirty-two minutes of sublime big-time pro wrestling. 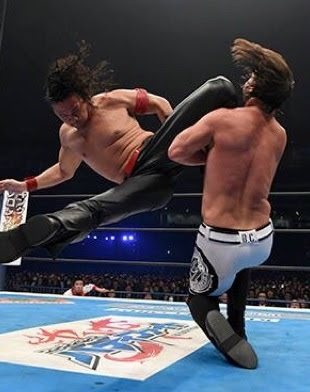 Arguably the biggest first-time matchup in NJPW history, this would essentially be both men's swan song in New Japan before departing for WWE.  And to put it mildly, they left an indelible mark on the company.  For two guys who had never worked a singles match together, these two consummate ring generals meshed like perennial rivals, throwing every big move and counter they could think of.  If Styles were still suffering from his recent back injury you wouldn't know it by watching this.  Aside from toning down his aerial assault AJ wrestled a near-perfect match and even worked his back injury into a wonderful "goldbricking" spot.  Nakamura was amazing as always, and these two A-plus players put together an instant Match of the Year contender. 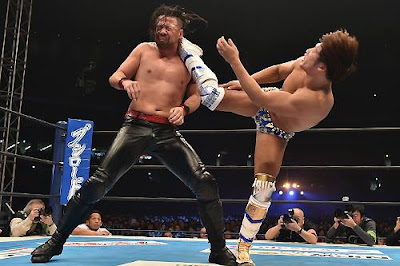 Most people who have seen this IWGP Intercontinental Title match instantly called it the 2015 Match of the Year, and I can't argue that point whatsoever.  Prior to this Ibushi had been almost exclusively a Jr. Heavyweight, and this was his attempt to establish himself as a headliner.  Spoiler alert: it worked.  This was an impossibly brilliant match, where Nakamura threw every MMA-inspired attack at Ibushi, only for the young lion to shake it off and retaliate with an awe-inspiring aerial move.  The pace these two set was truly astonishing without the match coming off as a spotfest.  Every big move had weight and repercussions, and the drama built right up to the end, as Nakamura once again retained with the Boma Ye knee.  But this bout did just as much for Ibushi as for Nakamura, and is still my favorite match from either guy.  Go watch this match right now!

For anyone not familiar with Nakamura's work (particularly pre-WWE), I urge you to seek out these matches (and watch Nak-Zayn again).  Nakamura is a unique, once-in-a-lifetime talent and I feel privileged to call myself a fan.  The King of Strong Style is something special.