I’ve recently begun a journey to watch every movie that has won the Academy Award for Best Picture and give my thoughts on it. So, here I begin my new series...Best Picture Reviews. 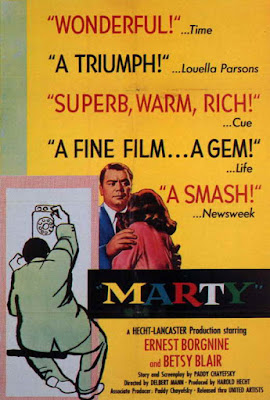 The 1955 Best Picture winner Marty, stars Ernest Borgnine and Betsy Blair. The film was directed by Delbert Mann and was adapted from a teleplay of the same name. The film not only won the Academy Award for Best Picture, but also for Best Actor, Director and Adapted Screenplay.

Marty is about a thirty-four year old butcher (Borgnine) who lives in the Bronx with his overbearing Italian mother. He is constantly lectured by his family and friends about settling down and getting married. As much as he’d like to get married, with no romantic prospects, Marty has come to grips with the idea of being a bachelor for the rest of his life. One Saturday night, his mother talks him into going to the Stardust Ballroom for a dance, and its there he meets lonely school teacher, Clara (Blair), who is crying on the roof after being abandoned by her blind date. Being the sweet nice guy that he is, Marty spends the evening with her dancing, eating, and talking, both having a great time together. They both become very excited about seeing each other again with the prospect of falling in love a real possibility for the two of them. It isn’t until Marty starts hearing what his mother and friends think of Clara, for very different reasons, that he begins to have second thoughts.

I loved this movie. I thought it was a great story, with fantastic acting and wonderful themes. It showcases a regular guy and a regular woman, both regarded as unattractive in the film, and really builds this great story that people can easily relate to. You care about both characters in the movie and really hope they pull it together and end up with each other. The movie is funny, heartwarming, with a few dramatic moments, and is a great romantic story that is perfect for a movie night with a special someone. The fact that this movie won Best Picture is mind blowing. These days a movie like Marty would never even come close to sniffing a Best Picture nomination let alone winning it!

Borgnine is fantastic! He plays Marty with such warmth and modesty, which at the time was a drastic change from the more villainous roles he took on in films like From Here To Eternity and Bad Day at Black Rock. He broke out of any kind of typecasting with this role and with it, he won Best Actor, beating out James Dean, Frank Sinatra, Spencer Tracy and James Cagney. I mean, holy shit! That’s a pretty impressive feat against all those legends, especially James Dean who was nominated that year posthumously. Borgnine was a character actor and began to star in different kinds of films after Marty, becoming a legend in his own right.

Paddy Chayefsky’s writing is the true star of this film and certainly deserved the Oscar. The dialogue is great and down to earth with many quotable lines like, “I’ve been looking for a girl every Saturday night of my life.” along with my favorite line, “College girls are one step from the street!” Chayefsky never overplays his hand at any point during the script, clearly knowing the kind of story he’s writing and having a firm idea about who his characters are. .

I loved this film and will always recommend it. So, next time you’re looking for a film to really enjoy with someone, grab the popcorn, some candy, a drink of some sort and snuggle up together with this one.