Welcome to another round of NJPW predictions here at Enuffa.com, where my colleague Landon Wayne (@LSWayne21) and I attempt to prognosticate New Japan's latest PPV offering.

This Sunday is the annual Sakura Genesis (formerly Invasion Attack), one of the company's biggest shows of the year, that should have implications leading into June's Dominion show. 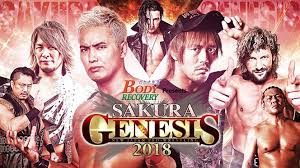 After a wildly successful US-based show last week, the company is poised to continue a few of the stories at play.  For those of you who missed Strong Style Evolved, the tag team main event between Golden Lovers and the Young Bucks was a truly epic encounter that furthered this unpredictable angle.  Also we got a taste of the Okada-Sabre main event in their furious tag match, and I can't wait to see this singles bout.  NJPW has done an incredible job of elevating Zack Sabre and presenting him as a fearsome stretching machine.  He counters nearly every move to the point that an opponent doesn't even dare throw a strike, because you're just giving him your arm to bend the wrong way.  Sabre is a uniquely gifted asset to this company and I'm delighted that he's being pushed so strong.

Anyway, let's get to the predictions.

I'll be honest, this show is a little tag-heavy for my tastes.  Feels more like a Destruction PPV than Sakura Genesis.  The Bucks being in the opening match here feels a little strange, and since they're facing two Bullet Club guys I guess that means Matt and Nick are on the outs with the BC in general.  I'm thinking we'll see a new faction formed, with the Bucks, Omega and Ibushi.  I'm not complaining, mind you.

Justin: This is a match to establish the Bucks as a newly sympathetic team.  Bucks obviously win here.
Landon: Young Bucks beat BCOG...though do Yujiro and Chase count? I mean I guess cause at this point we've shattered into three factions inside the Bullet Club and...you know what? Whatever, next.

Not much to this one, though Taichi's recent singles work has impressed me.  He's got a good look, a great douchey heel character, and a lot of potential.  Based on the Okada/Ishii vs. Suzuki/Sabre match last week I was hoping Ishii was being groomed for an Intercontinental Title match, but now it doesn't seem like it.  Goddammit, can Ishii get something better than this?

Justin: I guess Chaos for the win?
Landon: Speaking of grooming. I think Taichi, and I am the messenger  so don't shoot me for this, is being set up for the next NEVER Openweight title shot. Taichi pins Yano here.

The increasingly pointless six-man belts are on the line in another Bullet Club vs. Taguchi Japan match.  It literally doesn't matter who wins this, but I'd keep the straps on Fale & GOD.  That said, they'll probably do a title change because these belts ALWAYS change hands.

Justin: Taguchi Japan
Landon: Fuck it, put the belts on Mike Mak and Taguch. It'll be fun regardless

This could be a solid outing, with a ton of good talent and the White-Finlay feud being featured.  I don't expect they'll get a ton of time but there'll be some fast n' furious action.  I am looking forward to Finlay's title shot coming up, though I'm not sure why they didn't just book it here.

Another potentially very good six-man tag, this furthers the Evil/Sanada-KES feud, while I guess setting Naito up as an I-C challenger?  It's been three months since Evil & Sanada won the belts and they have only one title defense to their name, on a Road to New Beginning show.  I know Evil got hurt but if these guys are to be your tag division centerpiece; you gotta feature them as such. 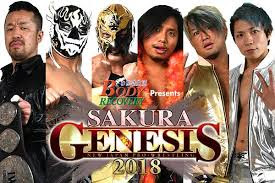 I was out of the loop on this one; I didn't even realize the SG C-team had won these belts.  Nor do I understand it.  I'd be happy with either challenger team winning this, especially the LIJ juniors, which would give that stable both sets of tag belts.  Then we could have a blazing feud between them and RPG, while Desperado and Kanemaru hit the bricks. 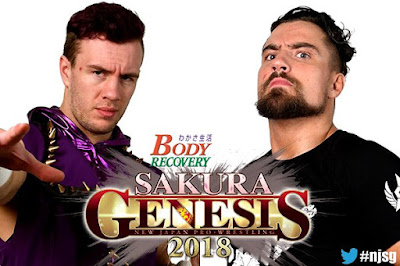 These two had a killer match back in November and I expect nothing less here.  Scurll has had Ospreay's number at every turn, and this is Will's chance to end that streak.  Look for this to try and steal the show.  Ospreay needs to retain here I think. 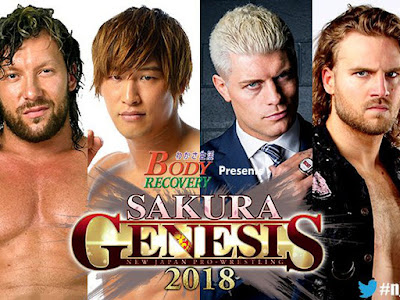 It's a preview of the Supercard of Honor main event coming up five days after this match, as we'll see Omega and Cody collide in tag team action.  Omega and Ibushi are hot off a HUGE Long Beach win, and while I don't see this match remotely equaling that one, it should still be a fine semi-main event.  I'd say Cody & Page need a win here to beef up interest in the SOH main event.

Justin: Cody & Hangman
Landon: Yeah but then Cody or Hangman have to pin one of them. Golden Lovers. 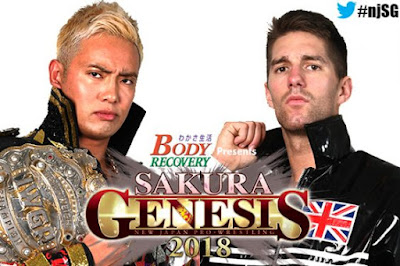 Holy shitballs this is gonna be great.  The dominant, nigh unbeatable 22-month champion vs. the sadistic submission machine who in the last month alone has made Naito, Ibushi, Sanada, Tanahashi and Ishii either submit or pass out.  Okada's offense is all based on getting in close, a very dangerous proposition when dealing with a limb-twisting spider monkey like Sabre.  If this isn't a major MOTY contender I'll be shocked.

Justin: Okada retains till at least Dominion
Landon: Fucking don't let this reign end on Zack, cause THEN Okada's just gonna win it back at Dominion.

There's your Sakura Genesis 2018 card.  It's less stacked than I could wish, but the big matches should all deliver, and the main event should be pretty spectacular.   Enjoy the show, and don't forget to join us on Facebook and Twitter (@EnuffaDotCom)!  Also check out Landon's blog Falcon Arrow Emporium HERE.