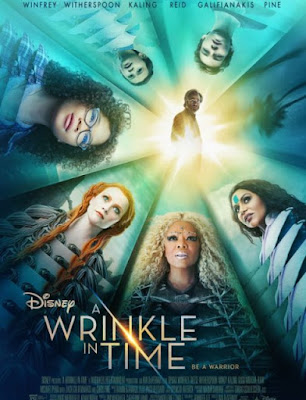 The film adaptation of the 1962 children's novel of the same name was directed Ava DuVernay and stars Oprah Winfrey, Mindy Kaling and Reese Witherspoon. It’s about Meg (played wonderfully by Storm Reid), a thirteen-year-old who is struggling, emotionally and academically, with the four-year disappearance of her scientist father (played by Chris Pine). She is considered an outcast and is subjected to teasing and taunting from her classmates, but is constantly supported by her younger brother Charles Wallace, who seems to be somewhat of a genius. Meg and her brother are visited by three supernatural beings (Winfrey, Witherspoon and Kaling) who explain they are here to help them find their father. From there they go across time and space to rescue him while simultaneously combating the ever-present and manipulating thing called “The It”.

I was looking forward to seeing this film and watching this fantasy adventure play out. Having Ava DuVernay directing was exciting for me too since she was behind really good films such as Selma and the Netflix documentary, 13th. She is a gifted director capable of making different kinds of movies and I was very interested to see what she would do with this story. When I left the theater after seeing it, I thought it was a really good kids movie with some easy to overlook flaws. It had a lot of colors, great energy, great messages, relatable characters and some funny moments. Then after thinking about it for some time, I realized that the kids in our theater didn’t have any kind of reaction throughout the entire film. They didn’t laugh at the funny parts and there wasn’t any kind of chatter at any point. Even when walking out of the theater nobody was really talking about it. It didn’t feel as if the intended audience for this film was engaged with it, and now I can see why.

This movie was pretty bad, even for a kids movie.

This was a CGI-heavy film, obviously, and there were moments that were visually stunning. The first planet the characters visit, with the flowers that love to gossip, was really great to watch and very vibrant and imaginative. But then, when they visit the Happy Medium, the effects were just straight up terrible and the green screen horribly noticeable, causing the scene to be unbelievable and cheesy.

Aside from Storm Reid, the acting in this film is subpar. Reese Witherspoon seems to be phoning it in and Mindy Kaling and Oprah don’t really do much of anything. Chris Pine was pretty good even though his role is rather limited in the film.

The characters themselves, aside from Meg, are pretty bland too. Mrs. Which, Mrs. Whatsit and Mrs. Who are supposed to be these supernatural beings that come to help Meg find her father, but don’t seem to do much helping. They can’t even show Meg how to tesser correctly and that’s kind of a bummer since that’s how they’re supposed to travel through space and time. Thanks! Also, the character of Charles Wallace in this film is vomit-inducing. So bad! When you give a kid the kind of dialogue that is meant for adults, it’s supposed to be fun and quirky. None of that happens here. It’s comes across as unnatural, unfunny and down right weird.

Then there’s this Calvin kid who just seems to appear out of nowhere, with the exception of a single shot of him in school watching Meg get teased about her father disappearing. There’s no backstory to this character and there’s no depth to him aside from having issues with his father. Oh boy! A popular rich white kid with daddy issues. Yipeeeee!

The film is an ambitious one and it shows DuVernay taking some chances with this big budget Disney project, and for that I give her credit. Some of it works well but most of it just falls apart in the second act of the story. The pacing of the film seems rushed and messy, leaving scenes anti-climactic which causes the ending to be abrupt and underwhelming. There are holes in the story with no real attempt to clear anything up. For example, there’s no real explanation why Calvin is coming along on this journey and there’s no explanation why Charles Wallace is shown to be this brilliant kid who oddly knows everything yet easily falls under the control of “The It”. Some genius kid ya got here! There is one excellent scene with the three of them standing in the middle of the cul-de-sac with creepy looking children in front of each house bouncing red rubber balls. It was creepy and really built up the tension you were expecting. Unfortunately, the tension quickly dissipates when the scene is over.

Now, there are some good things to take away from this movie. The biggest thing is the message that is contained in the story. Understanding and accepting your flaws, using them to your advantage, knowing that’s what makes you unique and special. It’s a great message that is impossible to overstate for kids.

No one can overlook the casting in this movie either. The main character is a black teenage girl who has a keen interest in science and uses her mind to come up with solutions to the conflicts her and her brother are facing. She is a girl that realizes her faults but comes to embrace them as her main weapon against “The It”. She is helped by three women supernatural beings of different color and ethnicities. In this day and age in Hollywood, where the subject of diversity in casting and in lead roles is still an issue, it’s nice to see a big budget Disney movie embracing this change. Hopefully other studios and companies follow suit.

Even though things start to fall apart by the second act, the beginning of the film was really good. It established the relationship and love between Meg and her father, how his disappearance affects her emotionally, socially and academically, and why she is so motivated to keep going in search of him. If there is anything about this film that you truly care about, it’s Meg, and Storm Reid did an excellent job with the character and the role.

Lastly, it was interesting to see the character of Calvin be used in the role that is usually written for women. You know, the character who is there to look pretty and do nothing. Which is fine, I was more focused on Meg anyway. Plus, I’m glad Ava Duvernay left out the romantic connection between Meg and Calvin that was in the book. It really gave Meg a larger purpose and the benefits that she gained in the story were far greater than winning the affection of some guy who does nothing.

All in all, it is a kids movie and it’s flaws are very noticeable. If you’re an adult who read the book as a kid and loved it and want to see this movie for only that reason, I’d stay away. You definitely won’t be satisfied with it and I’m willing to bet you will not like it at all. However, I would totally recommend this movie to bring your kids to because they will take away the really good things about this film. They’ll latch on to the visuals and the characters, the great messaging of the film will resonate with them and for them it will be a fun, fantasy adventure story. Isn’t that what you want out of a kids flick anyway?