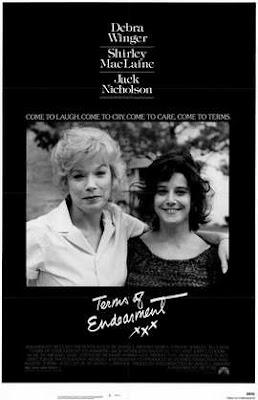 When you look through the list of Best Picture winners and see a film with Shirley MacLaine, Debra Winger and Jack Nicholson, written and directed by the wonderful James L. Brooks, you sit and say to yourself, “Well, that’s no surprise.” Oh, but it was dear reader, it was quite the surprise, because this movie is crap.

Terms of Endearment is the story of the relationship between Aurora Greenway (MacLaine) and her daughter Emma (Winger) over several years. Emma marries the comically named, Flap Horton (played by Jeff Daniels), as Aurora finds herself in a relationship with her neighbor, astronaut Garrett Breedlove (Nicholson). The relationship between the two evolves as Emma begins to have marriage problems while Aurora is dealing with conflicting emotions of her own with Garrett. The film’s pinnacle shows the mother and daughter in how they each express love in their own way.

Let’s start with the good, and there’s no better or obvious place to start than with MacLaine’s performance. She is fantastic as Aurora, a stern, no bullshit, and sometimes neurotic, self-absorbed woman who courts a number of gentlemen for, what seems like, the mere fun of having them around and showering her with compliments. Aurora is the kind of woman that you want to fall madly in love with, while at the same time makes you want to put your head through a wall. MacLaine is great at balancing the comical and dramatic tones of the film with her character. She is believable and wildly entertaining. With each new development you are constantly wondering how she is going to act and MacLaine never lets you down.

Nicholson is good in this movie but this isn’t a memorable role for him, in my opinion. As astronaut playboy Garrett Breedlove, he’s unfiltered and doesn’t have a care in the world. He knows he’s in demand sexually with younger women and embraces it fully, but still has a part of him that is caring and thoughtful. At times he’s a likeable character but most of the time, like Aurora, he’s a self-absorbed, stubborn toolbag and Nicholson, like MacLaine, does a great job in balancing the conflicting emotions and situations the character finds himself in.

Now, onto the bad. The way this story is executed is what makes this a disappointing movie for me. The pacing of the movie moves way too fast and in effect, ruins the rest of the movie for me. It doesn’t give me time to get to know the characters and makes me immediately hate them once I do know them. Within the first five minutes of the movie you’re introduced to Emma, first as a baby that Aurora inexplicably wakes up in the middle of the night because she’s paranoid Emma might not be alive. Then, the film cuts to Emma being about six years old after her father’s funeral, where her mother practically forces herself into Emma’s bed so she won’t have to sleep alone, and then the film cuts to Emma about to get married to some clown named Flap Horton (seriously, these character names are some of the worst names I’ve ever heard), who Aurora can’t stand because he’s boring and a college professor. So, within the first five minutes of the film, I want nothing to do with Aurora. She’s driving me nuts!

The story continues with Emma and her ongoing marital problems with Flap, who is obsessed with his career. Emma keeps getting pregnant, starts to suspect Flap is cheating on her but can’t prove it but decides to have an affair of her own with a guy who works at a bank, played awkwardly by John Lithgow. So, now I hate Emma. You think your husband’s cheating on you but you’re not sure so you just dive into an affair because you think “What’s the difference, my husband’s probably cheating on me anyway.” So, it comes to light that Flap is seeing someone but she continues her marriage with Flap anyways. Flap admits his wrongdoing and Emma has a moment where she probably should tell him about John Lithgow but decides against it so Flap can continue being the bad guy. Like, good fucking luck with that. So, now I hate Flap AND Emma.

Meanwhile, Aurora constantly has this group of three or four guys over for dinner and they each continue to express their love and devotion to her but she doesn’t take any of them seriously. She walks out of the house, starts talking to her neighbor, Garrett the astronaut, and then BOOM!, they begin seeing each other. None of it is believable nor do you think it’s going to last. They end up sleeping with each other and then soon after Garrett says that he’s going to continue seeing other women. PERFECT! Thanks for the storyline that goes nowhere. Now I don’t care about this guy.

The film just moves along and seems to casually brush aside these characters, even Aurora and Emma, to the point where I’m left with nothing but hope that this movie ends as fast as it’s moving. And that’s the kicker, it doesn’t! Because once the punch in the gut happens in the movie that actually makes you feel something for these people, it takes FOR-FUCKING-EVER!!!!!!!!!!!!! Oh my god, the movie wouldn’t end! I felt exactly like Elaine in that Seinfeld episode when she sees the movie The English Patient and constantly yells at the movie, “Just die already! Die!” Yep, that was me. Cold-blooded and insensitive, I just wanted the character to die so the credits could just roll. Fuck this movie.

This is all surprising to me considering that it was written and directed by James L. Brooks. He’s responsible for a few personal favorites of mine that include As Good As It Gets and Spanglish. Great movies with excellent writing. This film? I have no idea what the fuck he was thinking.

I’m not going to spoil the movie for anyone who is curious to see it. Just know that I disagree with the Academy on this film being Best Picture. It should’ve gone to The Right Stuff that year. That movie was incredible and told a magnificent story about some magnificent people. Really great performance by MacLaine but that’s the only thing I liked about this movie.