WWE Fastlane 2018: The Pieces Are In Place

That there was a mildly enjoyable fluff show that further set up stuff for WrestleMania.  In that regard, WWE Fastlane 2018 was a success.  It was easy to watch, the matches were all decent at worst, the main event was a fun little action movie, and the booking was logical.  Not much to complain about here, and thus far the 2018 WrestleMania season has been the strongest in several years. 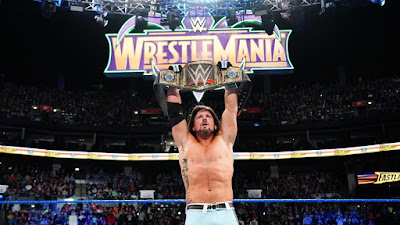 The opening match kinda set the tone for the whole show, as it was a fun little 15-minute Nakamura-Rusev back-and-forth.  Both guys got their major stuff in and while the middle was a bit slow and rest hold-heavy, the last third was pretty exciting and had good false finishes.  The best spot of the match was Rusev countering the Kinshasa with a side kick that turned Nak inside out.  Minutes later Nak countered the Accolade by slipping out behind Rusev and leveling him with a Kinshasa before finishing him with a second one.  The crowd liked this and it got across that Nakamura is ready for his WrestleMania moment. 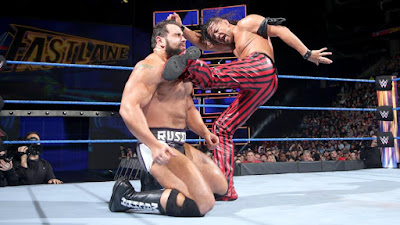 Another solid match followed, one that I liked more than I expected to.  Bobby Roode and Randy Orton, two babyfaces who are much better suited to be heels based on their personas and in-ring style, nonetheless put together a very well-worked 19-minute US Title match.  The third act felt a bit overly long but considering there was a title change it seemed appropriate in hindsight.  After several finisher attempts by both guys, Roode leapt off the top rope into a sudden RKO, which gave Orton the one active championship he's never won.  Post-match Jinder Mahal came out and confronted Orton before Roode laid him out with a Glorious DDT.  Obviously a triple threat at WrestleMania is in the cards.  This match was pretty good. 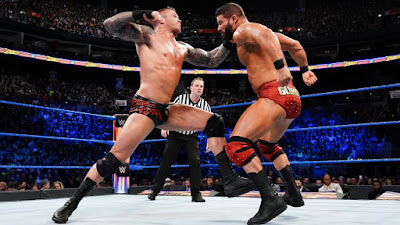 The one filler match of the night was next as Natalya and Carmella faced Becky Lynch and Naomi.  This was standard free TV stuff but it was inoffensive.  Nattie and Carmella won as expected to keep Carmella's briefcase cash-in on the table.  Rumor is she may cash in at 'Mania but lose, which is the right move.  I'm still baffled that Carmella got to be the first women's Money in the Bank winner.

The Tag Team Title match, in which the New Day and the Usos took turns aping each other's moves, was fun but was quickly interrupted by The Bludgeon Brothers as I predicted: "I have a suspicion Harper & Rowan get involved here, maybe even destroying both teams and making this a draw so there can be a 3-way match at 'Mania."  Man did I call it.  Harper and Rowan laid out everyone, destroying Xavier Woods to the point that he required a stretcher (Woods sold this attack great, going into convulsions as he was being tended to).  Obviously the Brothers will get a dominant 'Mania win and a long title reign.  I'm fine with this.

The Charlotte-Ruby Riott match was quite well booked considering how little chance Riott had of winning.  The iconoclastic Riott dominated much of the bout and had her two sidekicks get involved multiple times before being ejected from ringside (along with Charlotte's pals Becky and Naomi).  Riott is a pretty compelling character and a strong non-traditional heel in the same vein as CM Punk; I think she will eventually have a nice run at the top, but it's not her time yet.  Charlotte overcame the interference to get the submission win with the Figure Eight.  Aaaaand then Asuka showed up to announce she'd be challenging Charlotte at WrestleMania.  This is gonna be great.  Moving Asuka to Smackdown will give her a new slate of opponents and provide the best possible women's title match at 'Mania.  In the words of Jerry Seinfeld, "I THINK I'M EXCITEEED!" 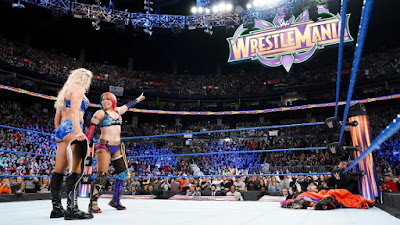 The main event six-pack challenge, while yet another schmozz match from a company who relies on them way too much, was pretty much exactly what it needed to be.  This was non-stop action that drove a couple storylines forward (one of which is, let's face it, quite stupid - why would John Cena ever not get a WrestleMania match?).  Everyone worked hard to make this a lot of fun.  Kevin Owens and Sami Zayn both ran afoul of Shane McMahon, who broke up both of their pin attempts, leading I'm sure to either a three-way or a handicap match between them.  AJ took a nasty table bump that kept him out of the last several minutes until his surprise Phenomenal Forearm on Owens to win the match and retain the belt.  It came off as a bit of a lucky win for AJ but considering the story was about how the odds were stacked against him I was alright with it.  He was in the right place at the right time and took advantage of it, as a good champion should.  With that, the WWE Title match at WrestleMania is secure, and I like that the announcers are pushing it as the match the fans really wanted to see.  It's nice when the company actually acknowledges what the fans want. 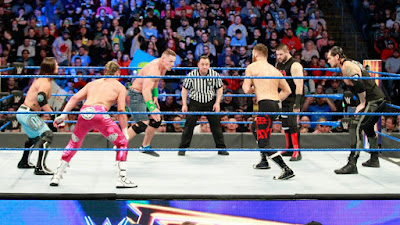 I've been saying it for months: Give us AJ vs. Nakamura for 25 minutes and you can do whatever else you want with WrestleMania.  Ironically, they're actually putting together a pretty stacked lineup this year, with multiple bouts I'm actively interested in seeing.  One of them, believe it or not, is Lesnar vs. Reigns.  Hear me out.  The new approach of letting Roman cut actual promos on Lesnar around Brock hardly ever being around and only showing up when the venue is good enough is a pretty genius strategy.  I'm baffled why they didn't do this three years ago, as Reigns is more or less spot-on in a way the fans can all relate to.  This angle worked for John Cena leading to his first match with The Rock (until the actual match in Rock's hometown); what fan wouldn't agree with this?  One guy is here every week busting his ass to entertain the fans, while the other, the Universal Champion no less, only works a dozen dates a year and often wrestles glorified squash matches.  Reigns is actually the clear good guy in this scenario and his promos reflect passion and a newfound emotional investment.  Whether the fans know it or not, he's doing this for us.  We'll see how the New Orleans crowd reacts to the match, but as of right now I think WWE and Roman are on the right track with this tactic, and surprisingly I'm actually looking forward to the match.

Anyway, Fastlane was fine for what it was.  Nothing great but nothing bad, everything made sense, and WrestleMania is coming together nicely.

Posted by Justin Enuffa Ballard at 11:52 AM