Welcome to the latest installment of A24 Reviews, where I review films released by one of the best independent film studios and distributors in today's industry. 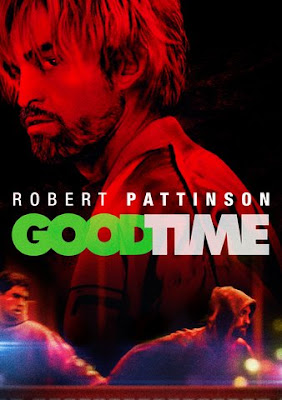 If someone asked me to recommend a movie from last year that not many people have seen, Good Time would absolutely be my answer.

Good Time, directed by the Safdie Brothers, is about Connie Nikas (played by Robert Pattinson) and his mentally handicapped brother Nick Nikas (played by co-director Benny Safdie), carrying out a bank robbery that goes bad. Running from the police, the two are separated and Nick gets arrested. As Connie goes into hiding around New York City, he learns that Nick is going to be shipped out to Rikers Island unless he can come up with $10,000 in order to bail his brother out.

The first five minutes of the film you’re introduced to Nick through his meeting with a therapist. Nick’s answers to the questions are short, unexplained but give you an insight into his life. The single tear that is shed from what seems like an innocent question is powerful and you immediately feel for Nick.

All of a sudden the meeting is interrupted by Connie who immediately berates the therapist causing an angry outburst from Nick, which clearly shows how much of an influence Connie is on his brother. From there, we are now thrusted into the world of Connie, and he’s a straight up douchebag. He’s a manipulative scumbag that has resorted to crime and scams in order to get what he wants and there’s no sympathy, remorse or regret for the people he causes trouble for along the way. Everyone he interacts with gets screwed somehow, including his brother. The next 15 minutes of the film are pure adrenaline as we are now in the throes of the robbery where there is barely any dialogue, just notes between Connie and the bank teller. It’s a riveting scene that continues with the getaway and ends with Nick getting caught and Connie goes into hiding around the city. We are shown Nick’s experience in jail which furthers the sympathy we have for his character.

Pattinson is uncanny in this film to the point where he is down right unrecognizable. There’s no hint, no trace, no sign of that guy from Twilight. Nope, this man crawled into the role of Connie Nikas and gave the best performance of his career. There were long stretches of this film in which I had forgotten I was actually watching Robert Pattinson perform. He was that good!

The film itself is dark, gritty and violent. It plays with bad lighting and shadows that really give off a realistic feel for the neighborhoods and families Connie finds himself in. There’s a feeling of hopelessness that pervades as the story goes along. Just when you think Connie is that much closer to getting his brother out, something happens that dashes those hopes.

I’d like to go more into the film but don’t want to give away too many of the details and then ruin the ride this film takes you on. The way the Safdie brothers told this story was great, using different storytelling tactics in order to engage the audience emotionally with the characters. Watching this film, you hate Connie, you despise him, but you find yourself rooting for him because you give a shit about Nick. You want Nick to be safe. Rooting for the bad guy is such a great conflict for the viewer. It heightens the tension and the emotion.

Good Time is filled with action, drama and emotion. It’s great storytelling and character development leaves you wondering what Connie will do next in order to get his brother out. The tension barely leaves until the story comes to a climactic finish. All of these things combined with Pattinson’s outstanding performance makes Good Time the most underrated film of 2017.