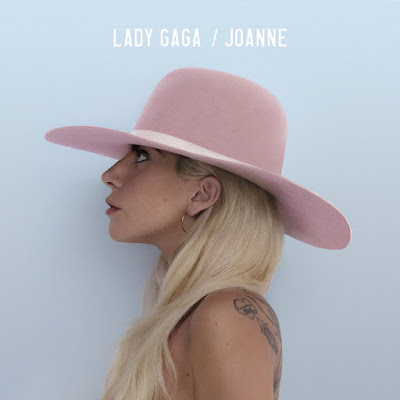 Lady Gaga's fifth studio album Joanne dropped on Friday, and I'm pleased to say I'm already a big fan of it.  Shedding much of the pop star accountrements and focusing on the music itself has resulted in a streamlined, mature, timeless-sounding release from the eccentric songstress.  Gone are the slickly produced dance floor anthems and "Ain't I weird?" lyrics, and in their place are pop-rock songs with dashes of country, soul, folk, latin, and plenty of 1970s influence.

I've been a Gaga fan since about 2010, when her bizarro dance-pop radio hits began to grow on me like a fungus, and by the time her 80s-heavy, second full-length record Born This Way was released I was all-in.  Even more impressive to me was the decadently over-indulgent Artpop, seemingly an ode to Gaga's own iconic status.  Sadly that album underperformed in sales (a measly 2.5 million copies worldwide), and it seems likely her audience had by 2013 tired of Gaga's over-the-top theatrics.  I actually consider Artpop her best album, but a change in direction was the right move; Artpop had taken the concept of The Hugeness of Lady Gaga as far as it could go.

With Joanne we have a much scaled-down presentation which has thus far carried over to her public appearances.  Her on-stage attire is still flashy but in a much more subdued, minimalist way, and the focus now is entirely on the songs.  And Joanne boasts some damn good ones, aided by several talented collaborators.

From the midtempo opener "Diamond Heart," with its live drum and guitar sounds, the stage is set for something really different.  Gaga's considerable vocal talent is allowed to shine through from the get-go, largely free of the usual radio pop effects.  The song's syncopated chorus is instantly memorable in a completely fresh way, and I was drawn in immediately.

Probably the most traditionally hooky song on the album is the raunchy "A-Yo," boasting an energetic backbeat and a Shania Twain-ish swagger.  Guitarist/producer Mark Ronson lends his quirky guitar licks here and on several other songs, and the result is a delightful pop/rockabilly hybrid.

The biggest stylistic departure is the title track, a touchingly simple, finger-picked guitar-folk ballad written for Gaga's recently deceased aunt.  This song reminds me of mid-90s alt-folk like Sheryl Crow and Joan Osborne, with a touch of acoustic Dylan.

The first single "Perfect Illusion" has grown on me with repeated listens and harkens back to 70s Donna Summer, with its highlighting of attitude over saccharine melodic hooks.  The climactic final chorus showcases Gaga's vocal power.

The next three standouts are the piano-driven track "Million Reasons," a vulnerable and honest ballad about a failing relationship featuring gentle harmonies and a soulful chorus; an old-fashioned country-western song with a hint of surf guitar called "Sinner's Prayer;" and a throwback to Motown (think Darlene Love) called "Come to Mama," dealing with humanity's self-destructive tendencies.

The penultimate track on the album is "Hey Girl," a duet with Florence Welch, whose beat immediately brings to mind Elton John's "Benny and the Jets."  But this song is a 70s-style anthem to friendship and support, and its vocal melodies stand completely apart from "Benny."

The album's intense, emotional closer "Angel Down" is a stripped-down piano-heavy tearjerker featuring lyrics dealing with senseless gun violence.  The soulful chorus is reminiscent of Hozier's "Take Me to Church," but Gaga delivers the melody with a sense of outrage and resentment, taking to task all who would stand idly by in the face of such tragedy.  This is one of her most powerful songs, and for me the album's standout.

If you sprung for the Deluxe Edition you were treated to three additional tracks: "Grigio Girls," a fast-paced and fun celebration of wine enjoyment that would sound fitting on a Sheryl Crow record; "Just Another Day," a bouncy, Paul McCartney-style pop-rocker; and a work tape version of "Angel Down" set in a higher key with an intense air of urgency.

Gaga's career and musical style have taken a refreshing 90-degree turn on Joanne, with an understated sensibility, lyrics of frank openness, and an emphasis on pure songwriting and vocal prowess.  She summed up the tonal shift perfectly with the comment "It was about going into the studio and forgetting I was famous."  Joanne shows the singer-songwriter maturing in much the same way The Beatles did during the Rubber Soul era - the music seems less intended for heavy radio rotation and dance clubs, and feels more like a serious exploration of complex, human themes, with a diverse musical palette as its engine.


Thanks for reading, and don't forget to join our Facebook group HERE!

Posted by Justin Enuffa Ballard at 9:07 AM