The second Smackdown PPV of the new brand split era is behind us, and as with Backlash the Little Blue Brand That Could delivered a succinctly satisfying show.  The roster may be thin and the undercard bouts were little more than filler, but the top of the card at No Mercy delivered a pair of excellent showings.

Due to the Presidential debate, WWE opted to move the WWE Title main event to the top of the show.  An odd move considering this wasn't a weekly show subject to ratings like RAW or Smackdown; with a PPV you can start watching late or pick it up in the middle and then go back and see what you missed.  But whatever, this main event was absolutely tremendous regardless of its slot on the card.  AJ Styles, John Cena and Dean Ambrose strung together a non-stop thrill ride that flowed smoothly and made innovative use of the Triple Threat format.  We still got the usual stretches where one guy was out of the ring selling while the other two continued fighting, but those were kept short and logical.  My only gripe about this match was the false ending where Cena and Ambrose simultaneously had AJ in a submission hold and he tapped out.  Since the referee couldn't declare one winner the submission was thrown out and the match restarted.  Logically shouldn't the title be held up at that point, pending a Cena-Ambrose singles match?  That said, this wasn't the worst way WWE has handled such a situation; in late 2004 Triple H defended the World Title against Chris Benoit and Edge on an episode of RAW, and the same thing happened.  Hunter tapped out while both opponents had him in a submission hold.  The Title was held up, but rather than a one-on-one Edge-Benoit match to settle the situation, they just threw six guys into an Elimination Chamber and Hunter regained the belt.  'The hell sense does that make??  Anyway, after the restart, AJ resorted to a chair shot on Cena to get the win and retain.  I read some complaints about this finish, but I have no problem with it.  In the first place, it's a no-DQ match type so why wouldn't you use a chair?  Second, AJ is a heel and he almost just lost the belt.  Makes perfect sense for him to employ underhanded tactics to keep his Title.  Great match (easily ****1/4) and it's a shame it couldn't close the show. 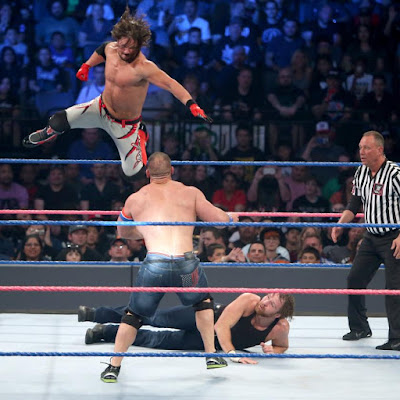 Next up was Nikki Bella vs. Carmella.  This was exactly what I expected and no more.  One of the filler bouts on the show.

Third was Heath Slater & Rhyno vs. The Usos for the tag straps.  I liked this better than their Backlash match.  The energy was there, the crowd was into it, The Usos changed up their look and used a more aggressive style.  This was just fine.  Slater & Rhyno retained, and if Jimmy & Jay are moving on to a feud with American Alpha I'm not sure who's next to challenge for the belts.

Since Becky Lynch was unable to compete due to an undisclosed health issue, WWE moved the intended Jack Swagger-Baron Corbin pre-show match to the actual PPV.  Like Nikki vs. Carmella this went exactly as I figured, aside from Corbin winning, and was another case of one guy hitting his finisher but failing to win, followed by the other guy making a one-move comeback and winning with his own finisher.  I hadn't even noticed this sort of thing before until I heard Bryan Alvarez talk about it, but it's pretty blatant and happens a lot.  Not much psychology in that sort of booking.

The other highlight of the night (and what should've gone last if the Triple Threat was opening the show) was The Miz vs. Dolph Ziggler for the I-C Title.  Hot damn this was good.  These guys had a fine match at Backlash but this was on another level, both in terms of urgency and storytelling.  The crowd was hesitant to get into it at first but by the end everyone was red-hot for this match.  Miz and Ziggler hit each other with everything and we saw multiple finisher kickouts, a cameo by two Spirit Squad members, and a callback to an Eddie Guerrero boot-losing spot (on his birthday no less) before Ziggler finished Miz off with a superkick.  While I'm sad to see such a great I-C run come to an end (Seriously, Miz really managed to elevate that belt again), I'm glad Dolph isn't going anywhere.  The rumors had been swirling that he was moving on to either another role in the company or something outside WWE entirely.  Looks like that was just put out there to swerve everyone.  On just about any other card this match would've stolen the show, but at No Mercy 2016 it was second-best.  Still, easily a **** match. 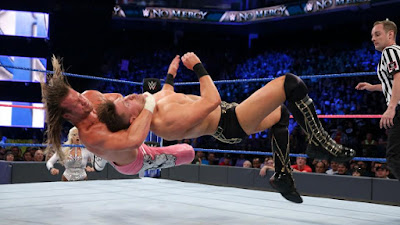 Sadly everything after Miz-Dolph was anticlimactic.  Alexa Bliss faced substitute Naomi in a short match where once again the sub won.  I'm not sure why WWE always sticks to that tradition, particularly since Alexa needed the win to stay credible as a challenger, but whatever.

The main event slot went to Randy Orton vs. Bray Wyatt, and while it was mechanically fine, the crowd gave less than a shit.  They had a perfectly serviceable Smackdown main event that ended with Luke Harper making his return and costing Orton the match, but this didn't at all belong as the finale of the night.  How in the hell do you not put Miz-Ziggler last in this situation given the story they were telling and the fact that Ziggler's win would've sent everyone home happy?  That way the show would've been bookended by two classics.  Instead we got a flat main event in front of a disinterested audience.  The big news though is Bray Wyatt finally won a PPV match - his first such win in 2016.  Obviously this feud will continue.  Fine then. 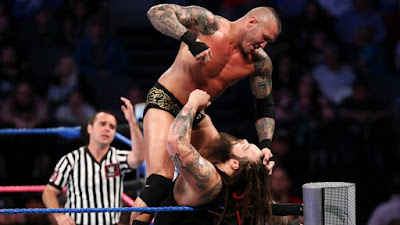 No Mercy was a very uneven show but provided two ****+ matches - nothing whatsoever to sneeze at.  Plus it wasn't overly long; they signed off at about 10:40 eastern.  It's odd that a PPV that runs well short of the allotted three hours is seen as a plus, but in 2016 with soooo much content it's refreshing to watch a wrestling show that doesn't overstay its welcome.  Nothing got shortchanged and the important matches all got time to breathe.  Not a bad show at all.


Best Match: AJ vs. Cena vs. Ambrose
Worst Match: Jack Swagger vs. Baron Corbin
What I'd Change: If you're gonna put the main event on first, put Miz vs. Ziggler on last.
Most Disappointing Match: Randy Orton vs. Bray Wyatt
Most Pleasant Surprise: I guess that Ziggler isn't leaving
Overall Rating: 7/10
Posted by Justin Enuffa Ballard at 12:00 PM