History was made at Hell in a Cell, as the RAW Women's Division got to headline a main roster PPV for the first time, one year after breaking that barrier in NXT.  Not only that, but it took place in the first-ever Women's Hell in a Cell match that also included (to my knowledge) the first-ever Women's table spot.  A glass ceiling was shattered in Boston, MA, and while the overall results were mixed, it was certain an historic occasion. 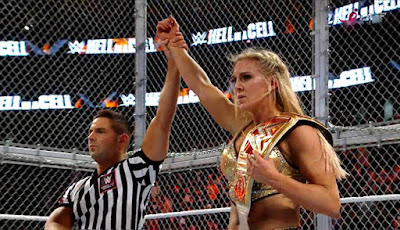 The show opened with one of three Cell bouts (If you're going to include three of the same gimmick match on a PPV it certainly makes sense to spread them out), pitting US Champion Roman Reigns against hated rival Rusev.  This match sadly didn't do much for me, as I didn't get a sense of brutality or hatred which, given the nature of this feud, should've been front-and-center.  This match was needlessly stretched to 24 minutes when 15 would've sufficed, and I would've preferred a strong style-esque match where they simply pounded the bejeezus out of each other while the Cell itself took a back seat.  The closing stretch contained solid work however, so it wasn't a total loss for me.  I am getting tired of the overused booking template where one guy hits the other with his finisher, fails to win, and the other guy hits one comeback move followed by his own finisher for the duke.  This wasn't the only match on this show to end that way.  Reigns retained as expected and I'm sure we'll find out soon enough who his next challenger is. 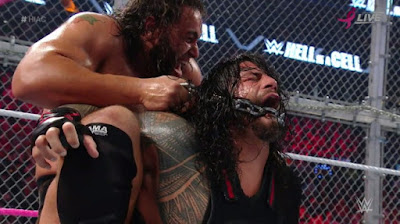 Bayley got a much-needed decisive win in the second match against Dana Brooke.  This was fine for what it was - Dana has a great character and owns it well but still needs to improve in-ring.  I assume Bayley will be stepping up soon to challenge for the belt.

Enzo & Cass had an entertainingly brief tag match against The Club after cutting a pretty fun promo, now referring to Anderson & Gallows as "Andy & Big Gal."  Not sure why I found that funny but I did.  This match was also just fine.  The Club finally got a win on PPV, using the aforementioned one-move comeback booking.  Once someone points out this formula it's hard to get past it.

The second Cell match was next, as Universal Champion Kevin Owens and Seth Rollins had a wild melee, making liberal use of tables and chairs.  They'd already had a solid match going before Owens accidentally knocked out the referee and he had to be taken out of the Cell.  As the door opened, Chris Jericho ran into the cage and locked himself in (after which Owens kissed him in appreciation - hilarious).  From then on it became a two-on-one fight and it was only a matter of time before Rollins would fall to the numbers.  Owens eventually won with the pop-up powerbomb to retain in a fine, well-worked Cell match.  I'm still not feeling Rollins as a sympathetic babyface and I'm not exactly sure what's missing.  We need a better reason to care about Seth than "Hunter screwed me over for some other dude." 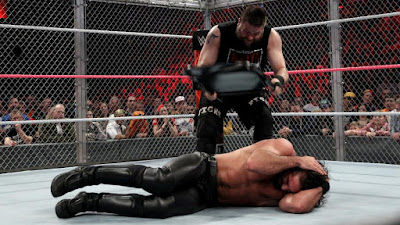 The Cruiserweight Title match predictably got the death spot, and the live crowd (who truth be told was pretty flaccid all night) gave not much of a crap.  This was fine but forgettable, and ended with Brian Kendrick feigning a knee injury for what felt like fifteen minutes before TJ Perkins took the bait and tried to help him up.  Kendrick headbutted him and locked in his Captain's Hook for the submission and the belt.  I like the move of putting the belt on Kendrick, who unlike Perkins actually has a character the fans can care about one way or the other.  The CW division isn't off to much of a start, post-tournament.

The penultimate slot went to the Tag Team Titles, as The New Day and Cesaro/Sheamus put on a very entertaining little match, rife with disagreements between the "odd couple" team.  Cesaro and Sheamus came very close to winning the straps, but as I suspected ended up drawing a DQ win, when New Day's third man Kofi Kingston attacked Sheamus at ringside.  I'm fine with this booking as it keeps New Day's record intact on the way to beating Demolition's, but also keeps Cesaro & Sheamus in the title hunt.

The main event Cell match fittingly went to hometown hero Sasha Banks (who got the biggest pop of the night from my vantagepoint) and Charlotte.  One of the best moments here was the look on both their faces (particularly Charlotte's) as the cage was being lowered.  They looked apprehensive, bordering on terrified as the steel structure descended, and it built beautifully the anticpation for this barbaric match.  Suddenly Charlotte jumped Sasha and the fight spilled to the outside before Sasha was powerbombed through a ringside table (which looked absolutely sick).  The story then became about Sasha not being able to even wrestle the match due to the back injury, and medics went so far as to board her and put her on a stretcher.  This definitely went on too long and for a few seconds I was pissed as it actually seemed like they were pulling a bait n' switch.  But just as the ring announcer was declaring the match over by forfeit, Sasha burst into action and the bout was finally underway.  These two worked a fairly safe but brutal-looking match and really gave off the aura of two people wanting to kill each other.  The pure hatred that was missing from the first two Cell matches came through here and on multiple occasions I feared a bit for their safety.  They got a good 18 minutes to work with, which included multiple table spots (one of which looked pretty bad), a great moment where Charlotte had locked in the Figure 8 and Sasha countered with multiple chair shots to the hip area, and a sadly underwhelming finish.  Sasha had set a table up in the corner and they teased a running powerbomb before Sasha's back gave out.  Charlotte merely whipped Sasha into the table three times and then hit Natural Selection for the win.  The crowd was dead for this, mostly out of disbelief, and I'm not sure why WWE ever thinks it's a good idea to beat the hometown star, particularly in such a flat way.  Sasha really should've retained here, especially if this is to be the blowoff (Who knows, maybe it isn't).  The live reaction would've been huge and likely would've elevated the match into 4-star territory.  As it was I'd still call it Match of the Night just by a hair, and award it ***3/4.  These two worked a realistic, gritty fight and made history.  I'm just a little sad it didn't top their July 25th RAW match, which is still the best of the series. 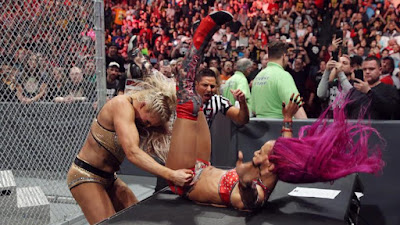 Overall Hell in a Cell was kind of a middling show.  Nothing was bad but nothing was great either.  The second and third Cells were easily the best two matches and really the only ones worth going out of your way for.  I'm hoping the company liked the main event so the Women's division will get more opportunities like this.  From a pure big-fight feel it was unequivocally a success, and the match was certainly very good.  I was hoping for a home run and they hit a triple.  A better finish would've probably gotten it there.  But this was certainly a very important match if nothing else.

Best Match: Sasha Banks vs. Charlotte
Worst Match: Bayley vs. Dana Brooke by default
What I'd Change: The finish of the main event needed to build to a peak and Sasha really should've retained in her hometown.  Also the first Cell should've been much shorter with a faster pace.
Most Disappointing Match: I guess Reigns vs. Rusev
Most Pleasant Surprise: Jericho's involvement in the Owens-Rollins match
Overall Rating: 7/10
Posted by Justin Enuffa Ballard at 12:59 PM