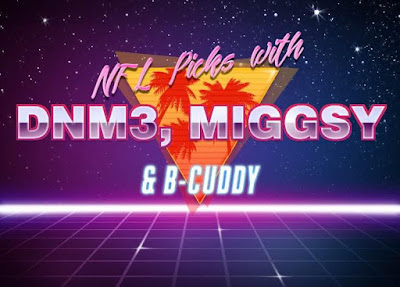 Lotta happenings and goings on here at work so this week's picks look to be short and terrible as opposed to long and terrible. Get the insults outta the way first: Brandon’s slow and dimwitted and I’m shocked he’s ever had sex with a woman without paying, and Miggsy’s got a gross, large bald head and breath that could floor a skunk. Also, our picks stink (though I pulled off a win last week YEAH).


DETROIT (+2 ½ ) @HOUSTON THE PICK: DETROIT
The BrockStar is now dead to me. Long live TEAM FATFACE! Not only does Stafford have a big ol’ chunky kisser and a rocket for an arm, but he has an uncanny resemblance to that now-bloated kid from the Sixth Sense.

Look I don’t know what to say anymore. While I’ve shown zero evidence thus far, I like to think I know the game of football. But this year is pure chaos. And the world as a whole is off its axis. I’m in last place in all my pick’em pools. The Cubs and Indians are in the World Series. Donald Trump is a presidential candidate. Danny has short hair. Dogs and Cats living together…MASS HYSTERIA!!!!


I’m not even sure of our records at this point. I think Dennis Franz is still in first, but who gives a shit. What I do know is I need to make some changes. Like life changes. For Chrissake, this past week I went to a hockey game with a muppet wearing a button-up under a jersey, and a man overwhelmed with guilt over his frequency of steak consumption. Actually, I guess I’ve had worse Tuesdays.


BRANDON’S BOOM PICK OF THE WEEK:
Seattle @ New Orleans (+3) – The Pick: SAINTS +3
This is a pure George Costanza play. I think Seattle wins and covers. That’s what I truly feel. However, if every instinct I have is wrong, then the opposite must be correct. So I’m taking the Saints at home in that landfill of a city (Watch Seattle win by 20 and I put a fucking hole in the wall. I’m already upset about it).

I suffered a terrible last-second loss last week as team fat-face’s Matt Stafford threw for a last second TD. STRAIGHT GARBO. I think the other two bozos lost as well, or they won. I don’t really care, they’re of no concern to me. They’re just a coupla dingleberries hanging on until I ultimately dispose of them.

New England Patriots @ Buffalo Bills +5 - PATRIOTS -5
Buffalo is the only team to have beaten the Patriots this year. What’s more, they did it in Foxboro AND shut them out, 16-0. My only issue with that is the Patriots were starting their 3rd string rookie Quarterback Jacoby Brissette who happened to need surgery on his throwing thumb at the time. Let’s all stand up and clap for Rex Ryan, you really took it to ‘em.  I usually steer clear of the home dog trap but this one is just too juicy. So many storylines - the Bills victory a month ago, the pre-game scuffle, Ryan Brothers’ smack talk. Those all pale in comparison to the return of Tom Brady. He’s back and out for blood. The Patriots are now averaging over 31 PPG, up over 10 pts from when he wasn’t the starter. The savior returns and we all dine on Buffalo.