These WWE PPVs sure have become a barrage, haven't they?  Every two weeks is a tad excessive.  Fortunately the split-brand PPVs have been solid work thus far.  Smackdown's Backlash overachieved and RAW's Clash of Champions was top-to-bottom one of the best main roster PPVs this year.  This Sunday's No Mercy looks on paper to follow suit. 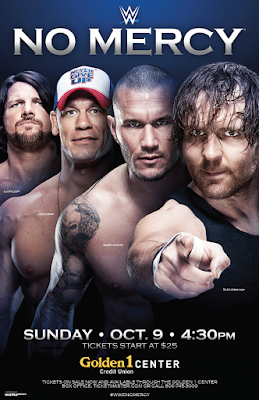 As I said before, while Smackdown's roster desperately needs some thickening up, the one good thing about their lack of depth is these SD PPVs don't need to be 3.5-hour epic shows.  Just a nice, easily digestible sub-3-hour show with a handful of fun matches.  This way it doesn't feel like overkill. 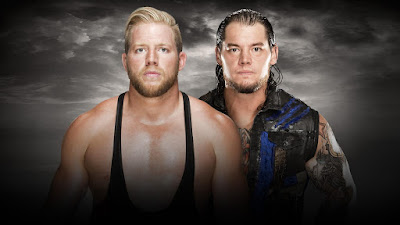 Smackdown is becoming the show of second chances, with The Miz, Ziggler, Hawkins, Wyatt, and now Jack Swagger populating the damaged roster.  Swagger's first order of business is to feud with Baron Corbin in a hoss battle.  I'd be lying if I said I'm excited about this, as Swagger is so beyond irrelevant and his act so stale at this point.  But maybe he'll turn it around.

Justin's pick: Swagger
Dan's pick: Corbin, though I don't like him at all

Welp, WWE brought back former Edgehead Curt Hawkins for some reason, despite never doing anything with the guy before, other than making him an Edge disciple.  The buildup to his comeback has been pretty good though, with the Chuck Norris-esque "facts."  Curt is only 31 so if used properly he could actually become an asset to the brand.  His opponent hasn't been announced yet but it doesn't matter really.  Curt's obviously winning his debut match.

Justin's pick: Curt Hawkins
Dan's pick: Who? But sure. He wins. 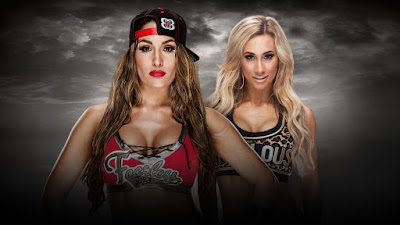 Here's what I like about this match: while it won't be any five-star classic, I'm very happy they're featuring a secondary women's bout aside from the Title match.  Makes it feel like this is a real division as opposed to them just including one Women's Title match per PPV out of obligation.  Nikki and Carmella are feuding over a personal beef, so there's something at stake other than gold.  It's refreshing to see a secondary division presented with some real depth, so this is good. 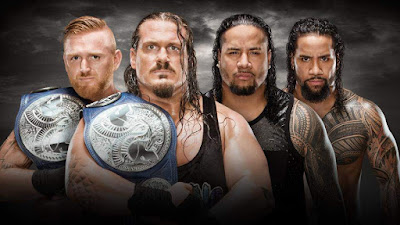 This match was just ok last month and I expect about the same here.  The Smackdown tag division is essentially just two teams right now and one of them isn't even in this match.  They gotta do something about that pronto.

Justin's pick: Let's put the belts on The Usos and get this Usos-American Alpha feud going already.
Dan's pick: I actually really like the Usos as bad guys here and hope they can win this one (even if one of them looks EXACTLY like X-Pac now). 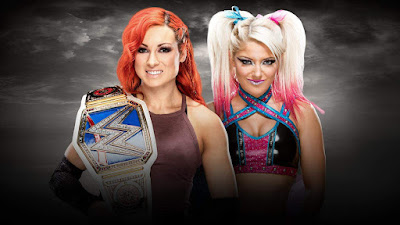 Holy crap, both these women actually have last names!  Anywho, Becky's taken her rightful place as the centerpiece of the SD Women's division and Alexa is coming right along as a mentally unstable heel character.  Should be a fine matchup and a nice first challenge for Becky.  I do not expect a title change.

Intercontinental Championship vs. Career Match: The Miz vs. Dolph Ziggler 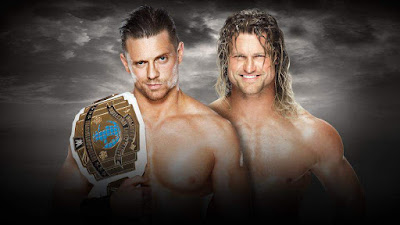 Aside from the main event this is the most intriguing match on the show.  Miz is on fire as the asshole IC Champ, and Ziggler's looked quite motivated of late.  While I'm a fan of Ziggles, I cannot justify taking the belt off Miz right now - frankly I'd like to see him break the longevity record so the guy who actually beats him will be a made man.  There are rumors that WWE wants to transition Ziggler into a backstage role, but who knows if that's a smokescreen to create suspense for this match?  I know Dolph's been burned out the last couple years after treading water for so long, so maybe he's ready to do something else for a while.  Anyway, I'm going out on a limb and saying Miz retains the belt and Dolph gets shown the door (and WWE better move someone like Sami Zayn over to the blue brand to take his place). 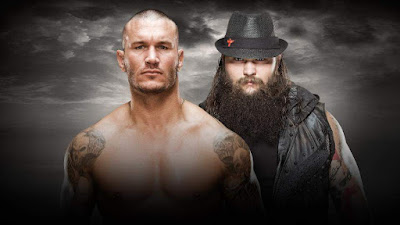 Well, finally we're getting this stupid match.  After booking it last month despite Orton not being cleared to wrestle (nice bait n' switch, jerks), WWE is coming through this time.  Jeezus, Bray Wyatt is damaged goods.  He lost to last-minute sub Kane at Backlash and then took another loss to Mr. Jacobs this past week via countout.  Do they literally not want Wyatt over?  Anyway this match should be good but my hopes aren't high for Bray. 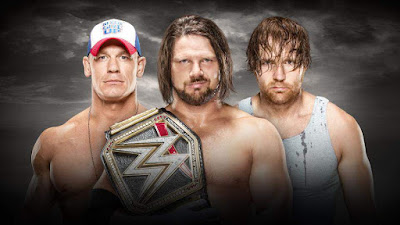 This one should be excellent.  AJ and Cena have great chemistry together and AJ and Ambrose have good chemistry.  AJ is currently the best talent in the entire company right now, Cena always delivers on the big stage, and while Ambrose seemingly lost a step during his Title run, hopefully he'll look good here.  Should be a fantastic high-energy main event.  I'd love to see Cena and Ambrose feud after this, while AJ moves on to Orton.


There's your lineup.  Looks quite solid on paper, and with Smackdown seemingly the more motivated of the two brands we should be in for some good times.
Posted by Justin Enuffa Ballard at 4:29 PM