Up 13 with 4 minutes left, you’re counting the money. But then the Chargers did what they do, and that’s blow the whole fucking thing. So now I’m done with the Bolo life. I’m with Miggsy, fuck Philip Rivers right in his dumb mouth.


So congrats to Brandon on victory #2. He’s used to that number, although typically he’s doing #2 in his pants on a golf course like a fucking ANIMAL. He’s a gross human being, just flouting society’s conventions. Perhaps this disgusting hooligan would like to have a poo party right here in this picks column!


And then we have Miggsy, who’s supposed to be an upstanding citizen with a child on the way. But what do we have here? That’s right, this is a pic taken just last night and definitely not a Polaroid from ten years ago at a bar that no longer exists.


Look at this guy, hanging out with harlots, boozing the night away and definitely on some kind of illegal narcotics.  Is this the kind of man you would trust with your NFL picks? SAD!


NEW YORK JETS @ PITTSBURGH (-7 ½ ) THE PICK: PITTSBURGH
When I first saw that line, I assumed it was the over/under on how many picks Ryan Fitzpatrick was gonna throw in this game. The man is addicted to throwing footballs to guys in jerseys that aren’t Jets colors. It’s amazing. Look out!


Take Pittsburgh. My money is on Fitzy completing more passes to Steelers receivers than Big Ben does.

How about that Miggsy giving me a hard time last week about driving a nice car and listening to a current hip-hop giant? Guy’s so out of touch. Ol’ Egghead copped himself a Wrangler a while back because the off-roading possibilities were endless in FUCKING QUINCY. Yeah, you definitely need to 86 the doors of that bad boy, and show off your mashed potato body on the way to Wollaston. What a putz.

And as far as music, this jamoke goes to Eagles concerts. THE EAGLES! And not full band "Hotel California" Eagles.  Like backup guitarist Eagles doing solo acts for geriatrics. Hey if you wanna give grandma a grab while “One of These Nights” blares in the background, don’t let me stop you. Speaking of the elderly, Danny still stinks. Guy's been watching sports for 117 years and still knows nothing. If he were a dog, we would’ve put him down years ago. On to the pick.


BRANDON’S BOOM PICK OF THE WEEK:
Philly (-3) @ Detroit – The Pick: PHILLY -3
This is actually a dangerous game to be betting on. All the money will be on Philly this week and the Carson Wentz bandwagon is overflowing with every moron analyst you can find. And another thing to be worried about is that this team is already overrated. Overrated just like (a fire flames hot take coming at you in 3..2..1..)… the Philly Cheesesteak. THAT’S RIGHT, I SAID IT!!! Cheese wiz on the sub??  This is your claim to fame?  Go fuck yourself. But I digress. The reason I’m still taking them in this game is because Detroit is terrible. The city, the team, all of it. And their head coach is an emotionless cyborg. Who happens to be amazingly bad at coaching football.


And the Lions Quarterback is equally as stupid…

Back to .500 after last week’s win. Feeling good about myself. Of course I haven’t read the blogs from those other two clowns yet so there still time for my luck to change. Danny lost again. No big surprise there. Why does he continue to make picks? It’s baffling to me. He’s like a child that wonders into a movie and wonder what the fuck is going on. He should just stay at home in his robe sitting in his rocking chair drinking prune juice like all the other elderly folk.


(Shout out to Bud Light, you should totally sponsor this blog. I don’t think anyone said c*nt this week.)


As for Brandon, I’m way better looking and like a foot taller. 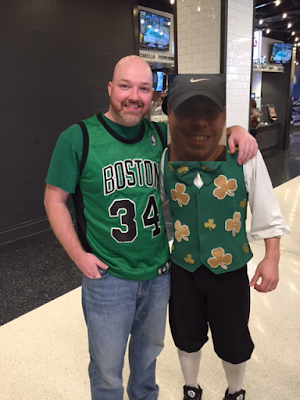 Miggsy’s Monsta pick of the week.
Houston Texans @ Minnesota Vikings- 7 Pick: VIKINGS -7
Houston is averaging 23 ppg and that’s NOT including the shellacking the Patriots gave them where they didn’t score 1 goddamn point. If you include that their ppg drops down to 17. They are not, I repeat, NOT going to put up 17 points on this Vikings defense. This team has already held Aaron Rodgers, Eli Manning and Cam Newton in check. You think the Brockweiler has the answers? I don’t think so. The Brocktopus is gonna get his ass kicked just like Brandon playing a pick-up basketball game against 12-year-olds. It’s pathetic really, I feel sorry for him but not the Brockasaurus. Fuck that guy.
Posted by Justin Enuffa Ballard at 2:54 PM