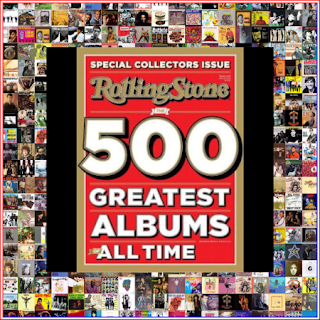 We carry on with our bashing of Rolling Stone’s list of the 500 Greatest Albums of All Time by tackling entries 201-250. You can catch up with Part 4 HERE.

I love Michael Jackson’s Bad. It’s my favorite album of his and I would argue it’s better than Thriller. Thriller is overrated because of the hype it had when it was released and because of the video.

With Cream, Wheels Of Fire should’ve replaced Fresh Cream at #101. Switching those two would make me comfortable with the placement. It’s a better album than Fresh Cream.

Pearl Jam’s Ten I think should be higher. It’s a pretty notable album for what it helped create. Should be in the low 100’s somewhere. Maybe switch Fresh Cream at #101 with Ten. Yes, there’s the answer and we all win!

I’m wincing a little bit with The Stones’ Tattoo You being listed while at the same time not totally hating its inclusion. I kind of feel there are far better albums than this one but at the same time I get why it’s listed. I’ll live.

Love New York Dolls. Very underrated punk band in terms of influence. Even though they were right there with The Stooges and Velvet Underground, they were never given enough attention and credit. They wore women’s clothes before Twisted Sister and all the hair metal bands of the ‘80s. I always enjoy seeing them listed.

The Smiths. I’ve never understood the appeal that this band has among its legions of fans. I mean, I’m all for sad, "pity me" music but this band is just over the top with it. The Queen Is Dead is a fantastic album but every time I see this band’s name, I’m just left feeling annoyed by all the people raving about The Smiths.

Loveless by My Bloody Valentine….I guess. Album is a droning pile of boredom.

U2’s War….meh, I’m over U2. I love a lot of their stuff but none of it ages well. I can barely listen to The Joshua Tree any more these days, let alone War.

The Neil Diamond Collection….great songwriter but never made a great album. Weird. So, let’s put up a compilation of his greatest songs. Love ya Neil but your albums aren’t that good and Rolling Stone just seemed to acknowledge that as well.

Springsteen’s Nebraska is sooooooo good! Only The Boss can make home demos off of a 4-track recorder sound so good and powerful. This stark, desolate and hopeless album is simply one of his best and I still get chills with each listen.

Nice to see Eric B. & Rakim get a little love. Rakim is the greatest lyricist in hip hop. Done.

I’m fine with this little grouping of albums here. Normally, I’d focus in on The Kinks Kronikles but this isn’t exactly a greatest hits album, more like a true compilation of their Reprise catalog. Still, it shouldn’t be on the list but I do enjoy it.

Black Sabbath’s debut album is fine, but I feel people talk about it too much. I understand its impact and influence but I think Paranoid and Master of Reality were far superior albums. The album cover is pretty sick though.

Ornette Coleman’s The Shape of Jazz To Come is such a great jazz album that I urge people to listen to it. Free jazz can be difficult for people, but I just want people to hear it. I feel it’s underappreciated.

R.E.M. had a string of five great albums beginning with 1987’s Document and ending with 1994’s Monster. The peak was 1992’s Automatic For The People which was propelled by the monster single “Everybody Hurts”. A smile will always come to my face when I see any R.E.M. albums included on any “Greatest Albums of All Time” list.