Welcome to the Enuffa.com Oscar post-show discussion, with Mike Drinan (@mdrinan380) and myself.  It was a fairly unorthodox presentation, with Jimmy Kimmel's comedic style quite at odds with the usual timbre of the evening, plus that bizarre turn of events at the end of the show. 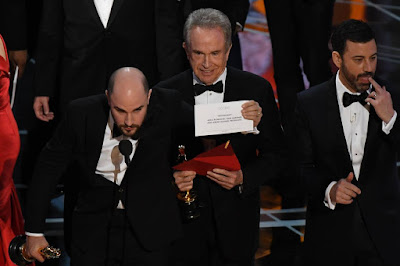 
Mike: First off, congrats on winning our Oscars predictions face off!

The show itself was just alright but it ran on waaaaaay too long. It lagged in a couple of spots but I enjoyed the bits Kimmel had; the constant ribbing of Meryl Streep, and his faux-feud with Matt Damon is something that doesn't get old for me. The tour bus bit was pretty entertaining but went on forever.

No big shocking upsets in the awards. I was surprised that Casey Affleck pulled out the Best Actor award from Denzel since he won the SAG award and for the past 10 years, the winner of the SAG Award for Best Actor has gone on to take home the Oscar as well. I actually watched Fences on Saturday night and considering how stunning his performance was I didn't see any reason why that would change. I don't have a problem with Affleck winning because his work in Manchester By The Sea was fantastic and he totally earned it as well. 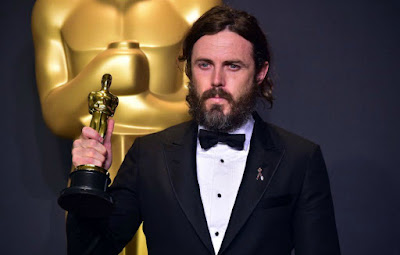 I was very happy that Moonlight won Best Picture. It was by far the best film of the year for all kinds of reasons and I'm glad Hollywood proved me wrong in this instance. At first I was pissed when they announced La La Land but when it all got figured out, I was a happy man.


Justin: I liked Kimmel as a host - he was very different for an Oscars ceremony, with a dry, kind of awkward delivery.  Loved the Mean Tweets segment and the Matt Damon stuff.  The tour bus segment was fun but yeah, too long.  Kimmel's self-deprecating humor was all great.

I was very happy to see Affleck win (I haven't seen Fences yet and I'm sure Denzel is fantastic in it) - this was a career performance for him and it was great to see that recognized.

That ending was amazing.  They announced La La Land as the winner and I was tempted to just turn the TV off and go to bed.  Man am I glad I waited it out.  Moonlight deserved this award waaaaaaay more than LLL so I was glad to see my faith rewarded here.  And the inadvertent twist ending will be remembered forever. 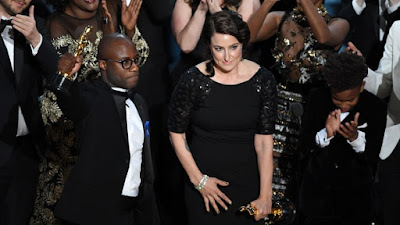 I was disappointed that Barry Jenkins was passed over for Best Director though.  Has a black director ever won that award yet?  Seems like every time a black director's film wins Best Picture, the director himself loses.  Steve McQueen not winning it for 12 Years a Slave is one of the most baffling decisions in recent memory.


Mike: Barry Jenkins should've won Best Director and no, no black director has ever won for Best Director which is a crime considering some of the black directors that were up for it: John Singleton (Boyz In The Hood), Lee Daniels (Precious) and Steve McQueen. Those are some master works. It's crazy.

As soon as they announced La La Land for Best Picture I immediately yelled out "Fucking bullshit!" and typed out my angry Facebook post about how Moonlight should've won. When Jordan Hurowitz (producer for La La Land) said "This isn't a joke. Moonlight won." I froze trying to decipher whether he was just honoring them for a great film or if he was serious. Definitely the biggest fuck-up in Oscars history. I enjoyed it.

I was also glad that Damien Chazelle didn't win for Best Original Screenplay and that went to Kenneth Lonergan. I felt that was the better screenplay by a longshot, as there was hardly anything original about La La Land's script.  Hollywood didn't fall all over itself and got it right with that category.

Viola Davis' acceptance speech was a memorable Oscar moment. One of the best speeches in a long time for the Oscars. I've replayed it several times and I can't get enough. I was happy for her for FINALLY getting her Oscar, and getting it with her The Help costar Emma Stone was a nice little story. Jessica Chastain and Bryce Dallas Howard celebrated that fact over Twitter.


Justin: Yes I was pleasantly surprised by Lonergan's win.  Manchester's screenplay was fantastically believable and understated, and left tons of room for the actors to really bring the characters to life.  Great win there.

Viola's speech was very moving and I'm glad the Academy somewhat made up for her snub five years ago.  The Help must have some cosmic significance - Davis and Octavia Spencer were competitors this year on top of that.  Also, Jessica Chastain needs to be in more movies.  Like every movie (I heart her).


Mike: Off the top of my head, Jessica Chastain is the next great actor that needs to win an Oscar. She's only been nominated twice and hasn't ever won and I'm hoping she comes out with a fantastic performance soon that will get her there. Yeah, there's something very otherworldly going on with the cast of The Help. It's funny.

Other than that, it was a pretty run of the mill Oscars show. Kimmel did well. I thought he didn't overdo anything. Well, maybe the parachuting food, but that might be nitpicking. Overall, I liked him as a host.

I only hope that this Oscar win for Moonlight gets more people to want to see it. I also think that history won't look too fondly back on La La Land. Might just be me though.


Justin: Kimmel was fun, and like I said, refreshingly different and unpretentious about everything.  Kimmel and others got in some anti-Trump jabs without overdoing it.

I think people will be more forgiving of La La Land since it didn't win.  Had it nabbed Best Picture I think we'd see a much stronger backlash against it.

As for Moonlight I'm looking forward to seeing what Barry Jenkins does next....


Well that's about all we got - hope you enjoyed the Oscars and our not-at-all-in-depth analysis.  Thanks for reading!
Posted by Justin Enuffa Ballard at 10:01 AM