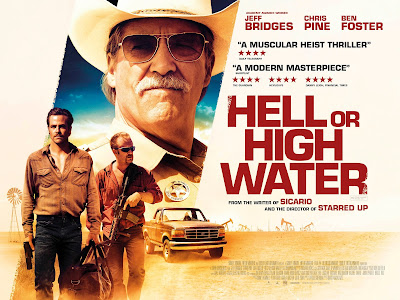 Well the Oscars are only a few weeks away and I'm trying to see as many Best Picture nominees as possible (Sorry La La Land). I have only seen two so far and the one I want to talk about is Hell or High Water. Going into this film was pretty excited. I mean Jeff Bridges is in it. The guy makes everything cool. I was not disappointed with this movie at all.

The movie centers on two brothers, Toby (Chris Pine) and Tanner (Ben Foster). Toby is a straight-living, divorced father just trying to make a better life for his son. Tanner is an ex-con with a short temper and an itchy trigger finger. The brothers are robbing branches of the bank that is foreclosing on the family land and using the banks' own money to pay for the land. They end up running afoul of U.S. Marshall Marcus Hamilton (Jeff Bridges), who is on the verge of retirement but has one hunt left in him. This turns into a cat and mouse game to figure out when the next bank is going to be hit.

The heist scenes themselves aren't trying to top anything that was in Heat. These are done by desperate men, not professionals, men who don't really know what they are doing. Mistakes are made and people pay for them. Watching them pull off one heist after the next you feel that these two men are doing what they think is right, not keeping the money for themselves but simply maintaining way of life.

All three actors do a fantastic job in this film, especially Chris Pine.  Bridges is great in this as usual, earning his 7th acting nomination this year for his supporting role in the film. Foster has been an exciting and intense actor for years, particularly in 3:10 to Yuma. Chris Pine, mostly known for his role as Captain Kirk in the Star Trek reboot series, turns in a more focused, quieter delivery than we are use to seeing from him.  That Pine can hold his own with these two accomplished actors suggests a promising future.

Hell or High Water is also nominated for Best Picture, Best Film Editing and Best Original Screenplay (written by Taylor Sheridan, who also wrote last year's Sicario). I hope it wins the screenplay award, beyond that I think La La Land has everything else locked up.  The film is fantastically written and perfectly executed; for a late August release you can't do much better than Hell or High Water.  Highly recommended.