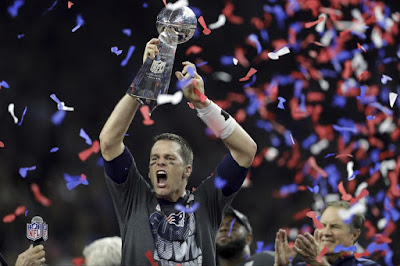 Is there any doubt? Can there ever be a question again about who the greatest quarterback of all time is? After playing dead for roughly 42 minutes on Sunday night, Tom Brady put the New England Patriots on his back and forced them to win a game they decided not to show up for. Brady threw for 466 passing yards on 43-of-62 passing along with two touchdowns and one TERRIBLE interception. He willed them to a victory, his fifth in seven (SEVEN) Super Bowls. Oh, he also won his 4th Super Bowl MVP, ho-hum (though I think that honor shoulda gone to James White, but hey, whattya gonna do).

This game was a NIGHTMARE to watch as a Pats fan. They came outta the gates DEAD. Just nothing going on. To say we were discouraged at the half, with the Pats losing 21-3, is an understatement. Many creative curse words were being hurled about at the party I was at. One of my favorite things as a sports fan is that feeling you get when your team is in a big game. That nervous, giddy, excited feeling. That feeling was dead in the first half of this game. Just nonexistent. But then #12 started to do his thing, and it came right back. Watching him start to play like he’s capable of playing got me excited in all my peeing parts. The GOAT was here to play. And play he did. Like a champion. As usual.


Bill Belichick also stakes a claim as the greatest coach of all time with 5 Super Bowl victories as head coach and two more as an assistant elsewhere. The man is a genius when it comes to the pigskin. The coach with the dour expression at all times even managed quite a few smiles after being handed the Lombardi trophy again.

After vanquishing the Falcons in the first overtime game in Super Bowl history, the moment Patriots nation had been waiting for was about to happen. That lying, conniving, backstabbing douchebag of a Commissioner, Roger Goodell would finally have to realize that FrameGate was a total and utter bust. The scheme cooked up by NFL management, Ravens and Colts ownership to tarnish the legend of TB12 and to get rid of him for a quarter of the season was a failure. He would now have to hand over the Lombardi trophy once again to the team from Foxborough. And the Pats fans in attendance did not disappoint. In a display of boooing I can only call Bettman-esque, Roger’s voice was defeated by the wall of boos thrown at him. It was glorious. Sure, in the long run, this man making around $40 million a year probably won’t even care about this. But on the biggest stage of the year for any program on television around the world, getting booed like a goddam cartoon villain has to hurt his huge ego. Has to.

So that’s that. In one of the greatest comebacks in sports history, Tom Brady has cemented his legacy as the greatest of all time. There is no doubt. You wanna talk about squishy footballs, or warm Gatorade, go for it. Keep looking for reasons for why this man and this coach constantly beat your team. They’ll be busy getting ready for the next one while the other 31 teams keep making up excuses.

JB Note: My office is right on the parade route, so I got about sixty pics of our boys on their way by.  Celebrate, you magnificent bastards! 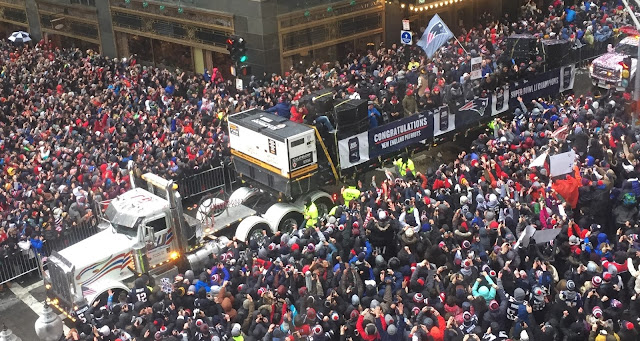 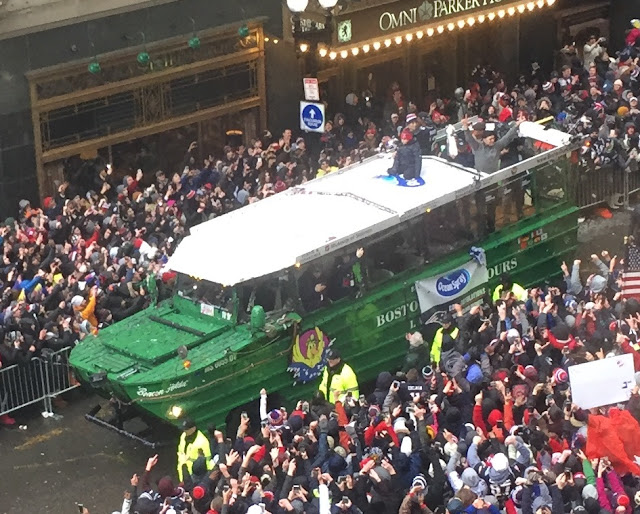 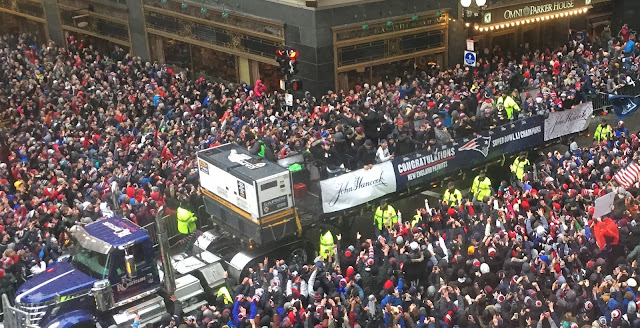