Well I may not be happy about most of WWE's creative direction heading to WrestleMania 33, but I'll be goddamned if they aren't 2 for 2 thus far in 2017 PPVs.  Last night's Elimination Chamber show featured two really solid women's matches (and a third that was decent), an unexpectedly awesome Randy Orton-Luke Harper match, and one of the best Elimination Chambers the company has ever put together. 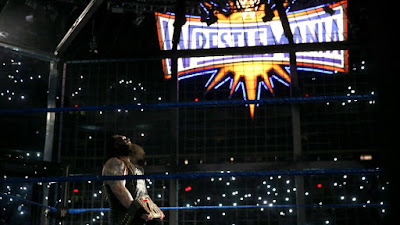 As I said, most of the likely matchups penciled in for WrestleMania are uninteresting to me at best, and from what I've read a few of them are downright nonsensical.  But fortunately the talent roster is so good right now they'd be hard-pressed to deliver a bad standalone PPV.

Elimination Chamber opened with a very well-worked Becky Lynch-Mickie James match, featuring some great mat wrestling and a nice "cocky veteran vs. young babyface" story.  I hope this isn't the last of this pairing, because they meshed wonderfully.  Becky unexpectedly got the win with a rollup, and frankly I think she oughta still be the Women's Champ on Smackdown.  This bout was much more compelling to me than the actual Women's Title match.  More on that in a bit. 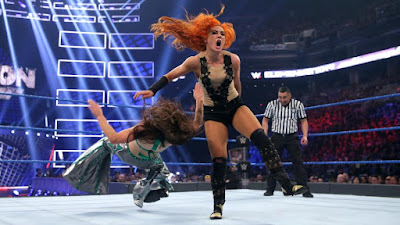 Next was probably the weakest match on the card, Dolph Ziggler vs. Apollo Crews and Kalisto.  I loved the heel move of taking out Kalisto during entrances, making this a one-on-one match for most of the running time.  The wrestling here was fine but not very memorable and not given much time.  Kalisto finally entered the fray in the last minute or so and Ziggler fell to Crews's spinout powerbomb.  I would've booked Ziggles to get a tainted win, but whatever.  I'm not sure where this double feud goes from here.

The Tag Team Turmoil match was third, and had some nice, furiously-paced action.  With six teams involved this realistically had to go over 20 minutes, and it did.  It was quite clear which teams matter on this roster and which don't.  American Alpha, The Usos and Rhyno & Slater were all booked pretty strong, The Ascension got to almost win the belts thanks to the match structure, and The Vaudvillains and Breezango looked like geeks.  But every segment of this match was at the very least watchable.  I liked AA eliminating The Usos only to later get killed by them, creating suspense as to whether The Ascension might steal the gold here.  The big feud is obviously AA vs. The Usos, which can be saved for another show; this feud's been building since September when The Usos "injured" AA to take them out of the inaugural Title tournament.  The match also made Gable and Jordan look like superheroes when they overcame the Usos' attack to eke out a win against a fresh team. 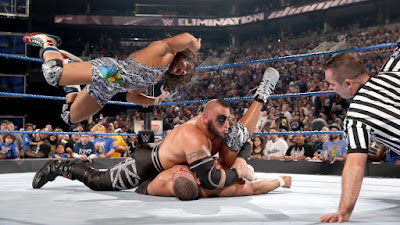 Possibly the best-worked women's match, or at least the one with the most heat, was Nikki Bella vs. Natalya.  Both of them looked like they legitimately wanted to maim each other, and Nattie is finally becoming comfortable conveying her heel character, repeatedly telling fans and the ref to shut up, and taunting Nikki whenever she was in control.  The wrestling here was crisp and technically sound but also felt somewhat like a legit fight.  Nikki by the way does a much better STF than Cena does - John should study this execution.  The match ended with the fight spilling to the outside and neither woman able to break away long enough to get back in the ring.  Normally I don't like non-finishes but this feud has been so personal and chaotic it seemed fitting to not have a winner.  I'm hoping the blowoff match will be at WrestleMania but from what I understand Vince wants Nikki to team with Cena against The Miz and Maryse.  This is a terrible idea and will rob us of not only a potentially great Nikki-Natalya climax but also a good Cena WrestleMania match.  Anyway, this was quite good. 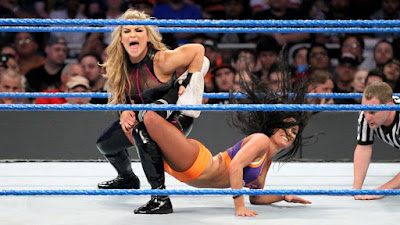 The surprise hit of the night was Randy Orton vs. Luke Harper.  I went into this not expecting all that much but these two gelled perfectly and this 17-minute match made a new star out of Luke Harper.  If he doesn't get a babyface push from this, WWE Creative is nuts.  Harper has always been the strongest worker of the original Wyatt Family, and he proved it here, bouncing around like crazy and showing real underdog fire despite having the size advantage.  We definitely need to see more of this pairing, and Luke needs to be in the Title mix on Smackdown going forward.  Helluva good match.

The weakest and coldest-received women's match was unfortunately the Women's Title bout.  Alexa Bliss and Naomi delivered a perfectly decent match, but it only got 8 minutes and the Phoenix crowd (who were fantastic all night, by the way), wasn't terribly invested.  For me this illustrates why taking the belt of Becky in December was a huge mistake.  The Becky-Alexa feud didn't have enough heat to warrant a title change, and neither did Alexa-Naomi.  But now we've had two title changes in this Championship's five-month existence.  Becky should've kept the strap long-term to build equity in this belt so that Alexa's eventual win could've been a major upset.  That said, the Smackdown women's division is actually deeper than RAW's right now.  RAW has stronger talent at the top but not much depth beyond Charlotte, Sasha and Bayley (Nia Jax is on her way up but not there yet).  Smackdown actually has six viable women's stars and multiple feuds playing out.  But as of now the Title itself is the least interesting thing about the division, and they need to fix that.  This match was fine and the crowd got into it by the end, popping for the title change, but this really should've been the opening match and Becky vs. Mickie should've been for the belt.

Now for the Chamber.  Goddamn, this was great.  First off, WWE redesigned the Chamber itself to reduce weight and allow upgraded arenas to house the massive structure.  Instead of a round base it's now more of a square, and they've added pads outside the ring so the guys don't have to bump on unforgiving steel grating.  I'm fine with this - protect the wrestlers and you can do much more interesting spots out there.  AJ Styles and John Cena were the two starters, and they continued their rivalry with five minutes of great action before Dean Ambrose entered.  Ambrose added some high spots, diving off one of the Chamber pods and turning the match into a brawl.  Bray Wyatt was next and he got to dominate for a little while before Baron Corbin entered and killed everyone.  I still have issues with Corbin's limited moveset but he looked great here.  Much like Braun Strowman's Royal Rumble showing, Corbin's in-ring time was limited but impactful.  After decimating the field, Corbin taunted the Miz as his chamber was opening but got rolled up by Ambrose for the pin.  In a fit of rage Corbin laid out Ambrose with End of Days, ironically allowing Miz to score the fall on Ambrose.  Miz then got a great douchebag heel moment, celebrating like a jerk before Cena took him out with an AA.  The remaining three then got some great exchanges leading to Wyatt's surprising elimination of Cena clean in the middle of the ring.  AJ Styles was now the de facto babyface in peril which by all rights should lead to a face turn sooner rather than later.  Styles fought valiantly and almost had the match won (Dammit, why can't we get AJ vs. Orton at 'Mania??) but unwittingly springboard-dove straight into Sister Abigail, giving Bray Wyatt the match and the WWE Title. 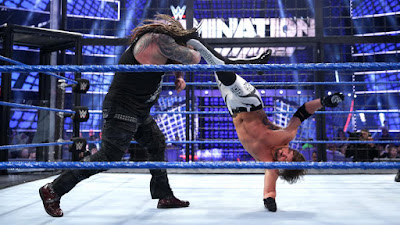 I said in the predictions that giving Wyatt the belt seems too little too late, considering how damaged his character has been over the past three years.  But they did a good job making Wyatt look like he belonged and put him over Smackdown's top two stars squeaky clean.  Again, I consider Wyatt vs. Orton at 'Mania to be a tough sell at best; I'd be happier if they added Styles to this.  But they've at least booked both guys strong so far.

This has to be in the conversation for best-ever Elimination Chamber, both in terms of the match itself and the PPV.  There were no bad matches, three in the ***+ range, and a fantastic ****+ main event where multiple stories played out and everyone got time to shine.  WWE may do a lot of things wrong these days, but so far in 2017 they've delivered two pretty great PPVs.  I'm still not expecting much from WrestleMania 33 but hopefully the deep talent pool can overcome whatever logic-defying creative decisions plague this year's show.

Best Match: Elimination Chamber
Worst Match: Ziggler vs. Crews & Kalisto, but this wasn't bad
What I'd Change: Give AJ the belt back and have him face Orton at 'Mania.  This match needs to happen on a major show ASAP.
Most Disappointing Match: Probably Alexa vs. Naomi because it didn't get much time and was the least compelling of the women's bouts
Most Pleasant Surprise: Easily Randy Orton vs. Luke Harper.  Let's see more of this feud.
Overall Rating: 9/10
Posted by Justin Enuffa Ballard at 12:17 PM