Archive of Honor: Respect Is Earned 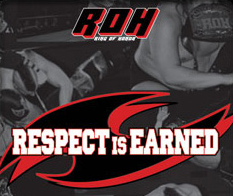 I can't believe it's taken me a year and change to finally start talking about Ring of Honor on this site. The Phoenix of ECW has been my favorite Stateside wrestling company for years now, and I have enough DVDs in my collection from the past 15 years to last me as long as I want. I've wanted to do previews and reviews for ROH the whole time, but school, work, or other reviews got in the way. But a few days ago, I realized that today would be the 10th anniversary of Ring of Honors first ever PPV, Respect is Earned. And it happened that in my massive library expansion last month, Respect is Earned found it's way into my hands. So, if there was ever a reason to review the first DVD in my collection, it's this. Happy Ten Year Anniversary, you glorious Bastards.


(Note: I will not be covering the Dark matches that came with my copy on a bonus disc. Both for the lack of time, this is a spur of the moment start to what I hope is a trademark series, and for a general lack of interest in talking about the matches. They're good, but nothing to go out of your way to watch. Cool? Cool) 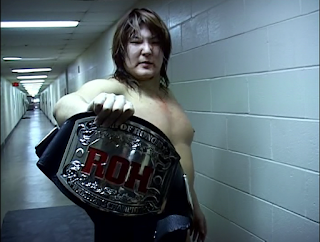 Takeshi Morishima killed the piss out of BJ Whitmer. There's really no other way to describe this. BJ called anyone in the locker room to come out and fight, and he got the monster ROH World Champion. This 3 minute murder makes no sense in hindsight, but consider the situation; this is Ring of Honor's first PPV, the first exposure they'd have to a national audience outside of their DVDs. This, and the following segment, were the best way to build the champion up and the men chasing him. Morishima took aseries of shots from Whitmer, powered right through it all, and finished Whitmer with a lariat, a boot, another lariat, and a Backdrop Driver. This was brief, and awesome.

As they're dragging Whitmer's corpse from the ring, Nigel McGuinness comes out to challenge Takeshi for somewhere down the line. Bryan Danialson came out soon after, and the Ballroom collectively exploded. This was a short, sweet segment that established Nigel and Bryan as the top contenders for the title. Later in the night, we had Takeshi and Bryan attacking Nigel in the ring, and KENTA made the save to set up the main event tag match for later.

The production on this show is, understandably, low. A lot of the crowd reactions, ring noise, and even commentary ended up sounding muffled and limited. I get that the company had only been around for 5 years at this point, and I don't know how much money they had, but it helps knowing they'll be in better situations in the future. Plus, Respect Is Earned was filmed in The Hammerstein Ballroom, probably my favorite arena in the United States to see wrestling in.

When someone is designated as a Tag Team guy, or a Faction guy, it's really easy to forget how good or not good they are. Rocky Romero is one of those guys, the only singles action he gets in New Japan is when he's in the Best of The Super Juniors, and even in that he's not in the tournament this year. But when I say that Romero and Naomichi Marufuji had an awesome opening match, you better believe it. The crime with Rocky is that, while very good, he's missing the one thing great wrestlers have. Everything he does is crisp, and his personality definitely shines, but he's unable to single-handedly carry a match. To an extent, I feel like he still needs a good opponent to put together great matches. You think of people like Tanahashi, Nakamura, and yes, Marufuji, you know they could have a match with Jinder Mahal and it'd probably be really good (That's not a challenge, WWE). And Marufuji here is very good, working with Rocky just seemed to come naturally. They had a very good match, trying to outdo one another and keeping it relatively clean. I think this is the match Chris Jericho watched to get inspiration to adopt the Codebreaker, since he credits Marufuji using it on an ROH show as the first time he saw it used. The NOAH Ace eventually won after this knee, a Coast to Coast, and a Sliced Bread off the turnbuckle. A very great match that left nothing to be desired.

Hey, did you guys know that Cesaro is a really good wrestler? Well, if you've only seen his WWE work, you've only seen half of what he can really do. But when Claudio Castagnoli and Matt Sydal faced the Briscoes for the ROH Tag Titles, we got a great showcase of what the Swiss native and can do. Sydal himself didn't look too bad in the match either. This match was the typical ROH Tag Title fare we see in Ring of Honor today, the stark difference is that the psychology of the match is practically non-existent. There was no face-heel dynamics, just  a series of moves. which if this kind of car crash match is your taste that's fine. It entertains me too, but only to an extent, and that extent ran out about 5 minutes from the end. I really don't care too much for the Briscoes today, let alone the Briscoes of ten years ago when they had even less psychology. Eventually, The Briscoes hit a Springboard Doomsday Device on Matt Sydal and successfully defended their titles. A good match, and the crowd was still very hot for it.But the action wasn't over, as Kevin Steen and El Generico came out to demand a title shot, before rushing the ring to attack. They had a very good brawl that was broken up by every wrestler under them in the pecking order. This whole Event is filled with a great amount of content that was purposefully done to build up to the next event, which is a great touch and shows good forward thinking from the company.

In what can be argued as the weakest match on the Two Hour event, Roderick Strong and Delirious faced off in a grudge match, centered around Strong concussing Delirious at a past event. There was nothing wrong with the match, the wrestling and storytelling were good and the crowd awake. But I don't find Delirious to be a likeable character, something about the shouting and frantic movement doesn't lend itself to being a good babyface in peril or looking for revenge. Strong himself is an exceptional wrestler, who is at this point JUST an exceptional wrestler, no real personality in the ring. I'm struggling to find anything to say about the match, other than Roderick won with a Tiger Driver. He, Rocky Romero and Davey Richards layed Delirious out again after the match, putting the trio over strong. 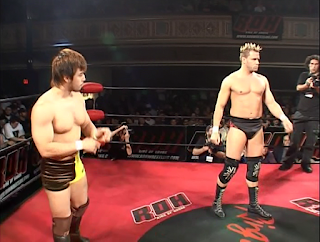 Nigel McGuinness and KENTA vs Takeshi Morishima and Bryan Danialson was a match that made the whole DVD lot I purchased worth it ($140, for the record). It's hard to put it into words, but the best way I can describe it is that there were 4 singles matches going on while a tag match is going on. Danialson/McGuinness, KENTA/Morishima, Danialson/KENTA, and McGuinness/Morishima were all well defined, all backstory was set up either at the start of the show or in the commentary. Morishima has established himself as one of my favorite wrestlers now, between how hard he hits and how good he plays the monster/badass heel. It took about 20 minutes for this match to break down into a four-way, but even then the action was easy to follow and the moves were all purposeful and defined. Nigel is temporarily eliminated with an arm injury, but came back with a brief, fiery offense using a taped up arm. KENTA and Danialson are left alone in the ring, for a final 2 or 3 minutes or reversals and escapes, before a Tiger Suplex from Bryan lead to a submission via Cattle Mutilation. Shortly after, Takeshi took Bryan out, then when Nigel tried to show the champion respect, got a lariat for his trouble. Takeshi Morishima is a God among men, and it is now one of my greatest disappointments I'll never see him wrestle live. 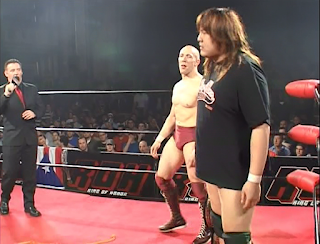 I can't call the entire PPV a perfect show. Delirious and Strong was a little too long, the tag title match was insane, and the production could have been better. But on the other side, there was a lot of great moments on the show that built for future events, the tag title match had all the positives of insanity, and the main event tag match is worth the price of the DVD on Ebay right now ($15-%25 right now). Now, ten years later we sit on the eve of another Ring of Honor PPV, and it's endearing to see how far this company has come since 2007
Posted by Landon Wayne at 12:28 PM