Today we have a guest writer offering his take on WWE's rather disturbing practice of blaming the audience for its own shortcomings.  Please welcome Joseph Chaplin (@JosephChaplin20), a prominent member of the WrestleNation Forum group on Facebook, whose writing can also be found at JosephChaplin.wordpress.com..... 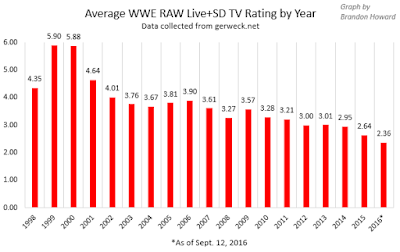 "Wrestling is an art." Yes, the somewhat controversial words of Ricochet (following his match last year vs. Will Ospreay at Korakuen Hall) do hold some weight. In a post-kayfabe world, wrestling has embraced an increased capacity as a means of self-expression. Different styles and cultures of wrestling have developed into all sorts of hybrids - some more successful than others - and the huge prevalence of the internet in the wrestling world has made the accessibility of these styles easier than ever before. Nobody could have predicted just a few years ago that longtime New Japan Pro Wrestling stalwart Shinsuke Nakamura would be headlining WWE-produced shows, or that NJPW itself would offer a streaming service to fans as it continues a trek towards worldwide success. That’s not to ignore the worldwide consortium of indie promotions now available through FloSlam - US, UK and German promotions have all expanded greatly thanks to the advent of online streaming in wrestling.

Not only has the internet altered how we can consume wrestling, it has turned the discourse surrounding it upside-down. Now more than ever, it’s possible to discover and share new wrestling with friends and acquaintances all over the world. Just the other day, I was learning about a niche kind of women’s wrestling to have developed in Bolivia. It’s the kind of unlimited exposure that would have given a tape trader a heart attack in years gone by.

Of course, not all development is positive. Wrestling - as with anything - has been subject to more and more negative discussion as a result of the internet. The unfiltered anonymity afforded to so many leads, predictably, to all sorts of trolling. Worse than mere trolling, however, is the movement of placing blame on the fanbase for the state of a product or a promotion. I find more and more that criticism aimed at the output of any wrestling promotion - and unfortunately WWE in particular - is often met with degrees of the same sentiment. The classic “Well, why are you still watching?” “I bet you couldn’t do any better” or “These guys go out there to entertain and that deserves respect no matter what.” It seems as though some would choose to conflate criticism of content with an outright dismissal or disrespect of the minds behind the content.

If you ask me, that attitude - that aggressive rebuke of criticism, no matter how constructive - is what’s causing the startling decline in WWE’s viewerbase. It’s no secret that TV ratings right now are, as Bret Hart might say, the shits. We have seen the decline - happening very slowly in the last fifteen years - grow significantly worse. The most recent episode of Monday Night Raw suffered a 5% drop-off from last week against easier NBA competition. Although a drop in the ocean of worrisome TV ratings (ahead of next year’s contract negotiations with USA Network), this instance is representative of the WWE TV decline beginning to go beyond sports and other media as a source of blame. Naturally, one would think the blame now needs to go inwards. WWE needs to examine the wild inconsistency of its own output and the reductive treatment of both fans and performers.

Instead of this, recent years seem to see WWE - and, by extension, many viewers - turn to blaming the audience. We surely don’t need reminding of Triple H’s "My Friend Mark" promo in 2015 following the poor reception of Battleground (a promo sentiment that has informed much of The Authority’s presence onscreen up to this year), or the long-term push to make Roman Reigns the face of the promotion. These incidents push WWE further into a culture of rejecting continued financial stability for petty gratification. The very unfortunate reality is that WWE cannot exist as it does in ten years time at the current rate of decline, and the anti-fan mentality looks to be speeding up that process.

I have no personal stake in wrestling promotions. If they die as a result of poor management, bad business or lousy output, that’s on them. Unfortunately, it seems as though many fans do put some kind of personal stock in the promotions they watch, and turn also to blaming those that criticise the product for perceived deficiencies. Not only do I come across the quotes above, but I’ve seen long-winded attempts at justifying the placement of blame on fans. I’ve seen some contend that the live audience is to blame for the flat bout between Seth Rollins and Finn Bálor from Summerslam last year (despite the overwhelming presence of WWE’s homogenous media in the form of one ugly belt), or that fans would do well to simply accept the recent Jinder Mahal push, despite the overwhelming lack of faith the average audience member has in a guy that was routinely jobbing just weeks ago.

There’s nothing more confounding. I cannot, for the life of me, understand why fans - at any level of investment - would take to blaming their fellow paying customers for a product. It’s a kind of anarchy I can’t imagine existing with any promotion but WWE. That’s not a knock on WWE itself, simply a reflection of the exposure and overexposure that comes with being the biggest game in town. Despite the criticisms one can rightfully level at NJPW, ROH or TNA amongst others, what you’ll not find is a widespread dismissal of those criticisms as faults of the customer. It’s a baffling attitude to adopt - defend the big business at the expense of the individuals and collective whose money funds its continued existence. I really can provide no explanation for it beyond what has been written. The WWE’s own position of having wrestlers blame the fanbase for their missteps and failings has had an impact in the worst possible way. Although not the majority by any means, the subset of fans blaming other fans (often seemingly linked with the curious "anti-smark" movement) is a concerning development in modern WWE discourse.

To conclude, it is best to return to the initial statement by Ricochet - wrestling is an art. In art, you often find that it’s one-and-done. A single painting, album or film can be put out into the world and judged or reevaluated for years to come. Wrestling is a live spectacle and does not have that luxury. It is defined by its immediacy - the necessity of keeping the show going. To accomplish this, the key is the customer. No matter what the product is, it’s vital that the audience be built up around it to appreciate the content and have some level of faith for the more bold decisions. There is a plethora of fantastic promotions all around the world right now offering that to their fanbase - I would contend that at a major level, only WWE operates with this attitude of dismissing customer concerns. The net result is that the Japanese wrestling scene is picking up more than it has in years, Mexican promotions are gaining more ground in America, and UK indies are the hot topic of discussion. The sooner it is realised by WWE that insulting the customer is a no-no, and that message carries over to the (admittedly minor) set of fans promoting it, the sooner I believe we’ll see WWE live up to the overwhelming potential of the talent pool it currently employs.

Posted by Justin Enuffa Ballard at 11:07 AM