Welcome to a brand new feature here at Enuffa.com, where Graham LaGauche (@GrahamFCrackers) looks back at the WWE week that was.  Glad to have you aboard Graham!

Welcome to Gauche Town, I’ll be your host though this week’s rollercoaster of emotions through the WWE Universe. I promise you, I actually love pro wrestling. 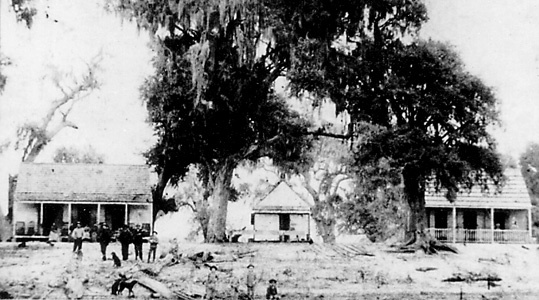 WWE was in London this week, so that sucks right off the bat. UK shows are notorious for inflated-ego audiences, and nothing happening. If something does happen, you’ve seen it before. Anyone up for some dueling authority figures on Raw? We haven’t seen that in like a month.

I can tell you last time I took Dean Ambrose seriously: It was when he left Barclays Center in Brooklyn New York. He hopped on the Q train at a station I can frequently be found standing in, looking stupid. I admittedly marked out, because I loved Dean’s work in The Shield, what with the helicopters and cool masks and shit. Dean got on that train and I’m down the road watching on my TV, so excited with wonder at the multitude of New York City-specific things he could bring back to pummel Cena with. He came back from Coney Island with a hot dog cart and attacked people with condiments. 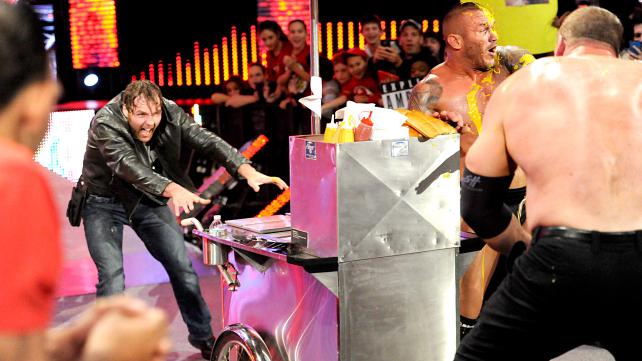 That was almost 3 years ago. This week he’s making barfy sounds and giving people “wacky” nicknames. Dude left his soul in Coney Island.

He’s also the Intercontinental Champion, which for the time being is more important than the Universal Championship. This means all the midcard players are top guys, and all the top guys are just prolonging their side-feuds. Like Samoa Joe and Seth Rollins, which is amazing on paper, but Seth seems like he’s been treading water since he already conquered King H. That match took so long to finally happen that I had lost interest almost a year ago, and Seth has done nothing to gain any outside momentum, except get hurt. At this point I just want to see Joe raze his complacency and send Seth home to think about what he’s done.

I guess that leaves Braun Strowman and Roman Reigns, since Brock is cradling the Universal belt in Brockanada for however long he wants. I’m ok with this because I actually think Roman can wrestle an exciting match under the righ circumstances, and Braun is an exciting guy to watch do ridiculous things. Except when he’s puffing up and then immediately backing off when his challenge is accepted. Whatever, just have him tip over one of those London double-deckers and all is forgiven. Or the next best thing, kick Kalisto into the nosebleeds. Kalisto is the Ike Broflovski of WWE. I’m ok with watching ROman and Braun homicide pact each other for however long it takes for creative to come up with a good reason to call a pay per view “Great Balls of Fire.” 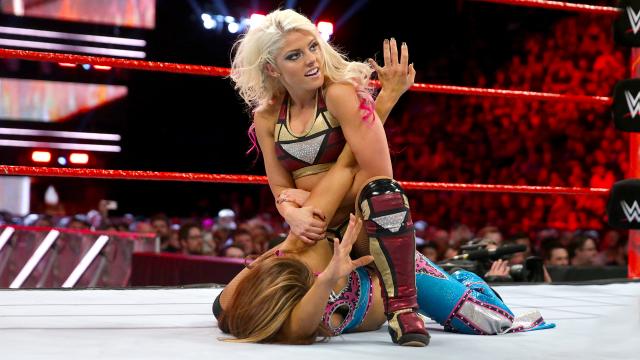 On a very positive note, Alexa Bliss is still the best thing in both women’s divisions. She’s telling more stories in one episode than the entire rest of the show. She’s the champ, she’s got history with Mickie James, a shaky “friendship” with Nia Jax...and she can carry all of it. No wonder they brought her over to Raw.

The best thing about Raw right now is Sheamus and Cesaro. I’ve been a fan of these guys being in the same room since the first time they beat the holy hell out of each other. Now they’re murking the entire division, even when losing to the #temporarilyfixed Hardy Boyz. They have a dope tandem entrance and now they have matching friendship jackets to go along with their international spy kilts. Also they can out-wrestle any team on earth until The Revival get healthy, because Sheamus is the toughest dude in the company and Cesaro is goddamn CESARO. All in on these guys “breaking” Matt and Jeff. 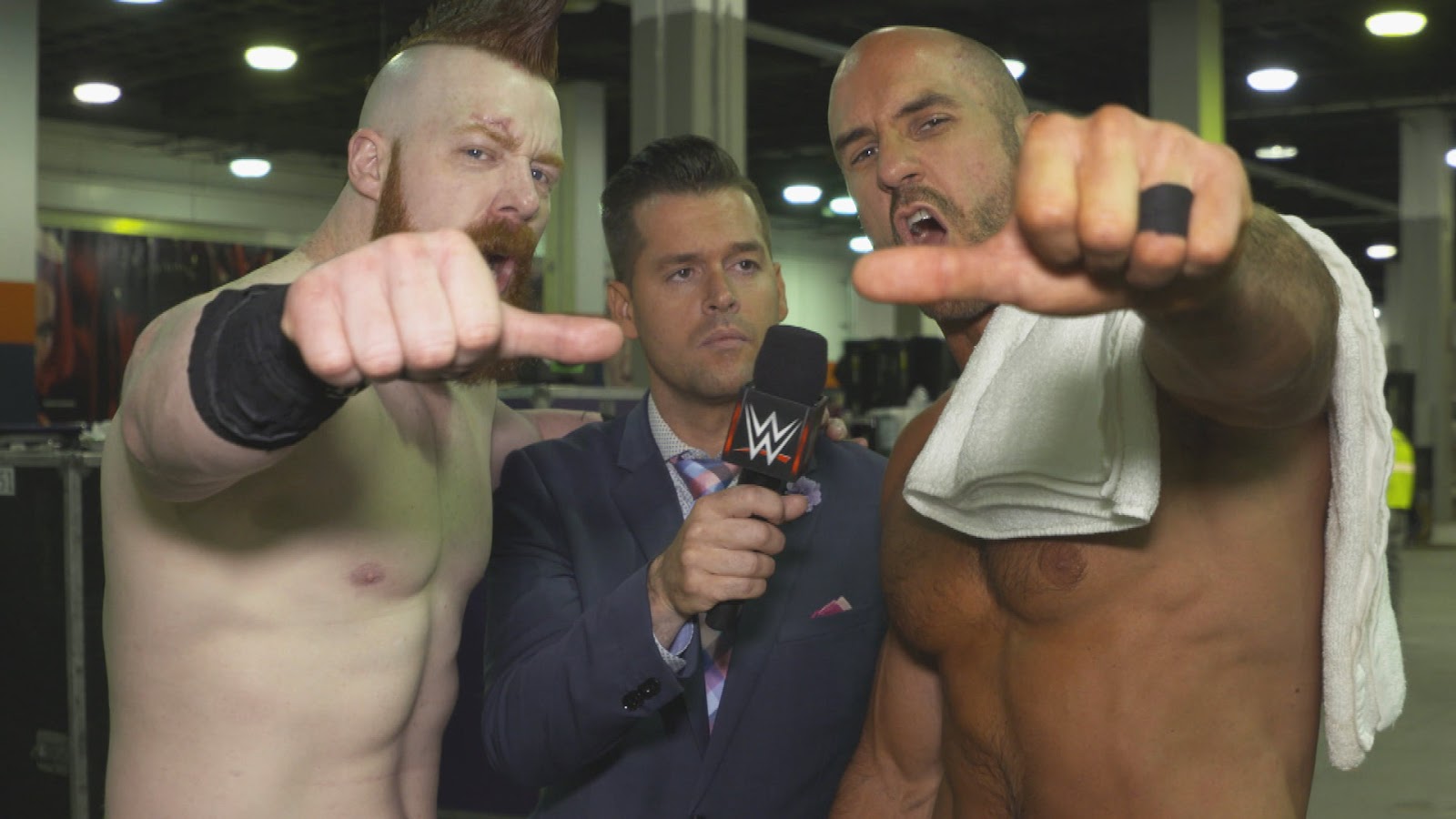 High fives to Golden Truth for acting like real people with real motivations and a sense of urgency.

+9 to The Miz and Maryse for being the actual power couple of WWE. Miz runs the risk of losing his career-defining momentum by being moved to Raw, but he won’t lose it without a fight. Dude has been making Dolph Ziggler and Dean look good for a year, And Maryse is the most effective valet in decades, making smart moves when it matters, with a solid foot in Miz’s camp at all times.

If you wondering if anything with Bray Wyatt has changed since Wrestlemania (and well before), beyond “losing every important match, but winning some matches that don’t matter, via outside interference,” don’t.

Speaking of Bray, over on Smackdown we have his House of Horrors accomplice, Randy “Sperm Snake” Orton. Look, I don’t hate Randy, I just never notice when he’s gone, and rarely notice him when he’s around. I would be so much more into Jinder Mahal pheonixing out of the ashes of 3MB to challenge the champion for the most important belt, if the champ wasn’t Randy. Best case scenario is Jinder gets the upset so they can explore any number of match ups. They’ll all seem new since this is pretty much a new Jinder. 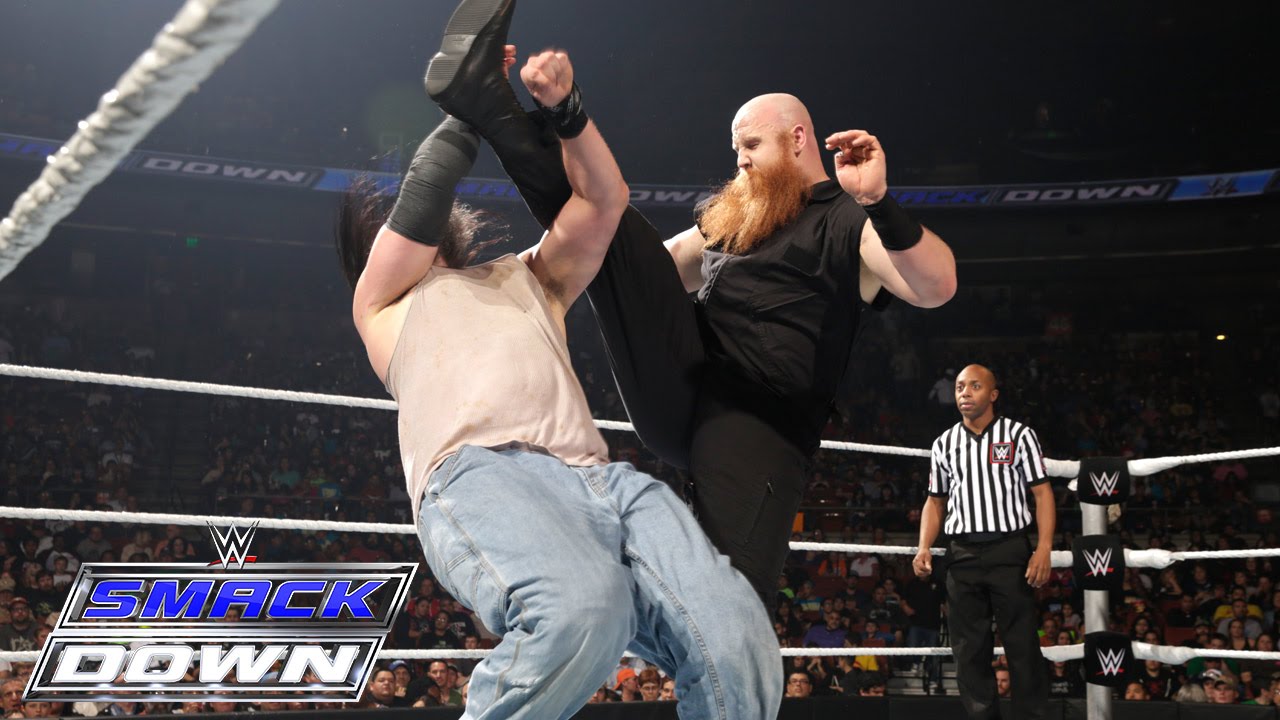 Another feud we have going for no apparent reason is Luke Harper and Erick Rowan. I should also be super into this since I’m a fan of both wrestlers, Harper in particular, but without living context (Bray) around it just seems like a feud lost in time. How can you not LOVE Harper and his new “Trucker with a heart of gold” thing he’s got going? Couple with his eyes, man, he makes my heart swoon. I even like Rowan’s dumbass Hazard Sheep mask, but pointing these two big guys at each other now seems like creative found a script page on the floor from like two years ago and got it mixed up with this week’s script.

By the way, what’s up with all the weird kayfabe reasons for Baron Corbin missing stuff? Sometimes he just slips off the apron when he’s fighting Ike. Sometimes he attacks a fellow employee. At a job where that’s usually rewarded with title matches.  Is attacking Sami Zayn really against the rules? I thought that was like a timecard to be punched on your way into work. I’m not complaining, any excuse to get Corbin’s crappy attitude off my TV, I’m down for. I hate that dude, and not in a good way. In fact, let’s just call up Aleister Black now so he can kick his head off. They can have a “Who listens to better tough guy music?” match.

The Smackdown Women’s Division is in that weird spot where they don’t have a solid plan so it’s “all hands on deck” until Asuka shows up, I guess. They’re teasing turns and truces but no one really cares. The Welcoming Committee is a thing that exists. People hate that name, but I kinda like it. It reminds me of Sunny Day Real Estate. What I don’t like is that the best wrestler on the team is Nattie, fresh off turning herself into a chimera cat. Nattie’s fine, but last time she was in charge of anything she failed right into a losing feud with Nikki Bella. 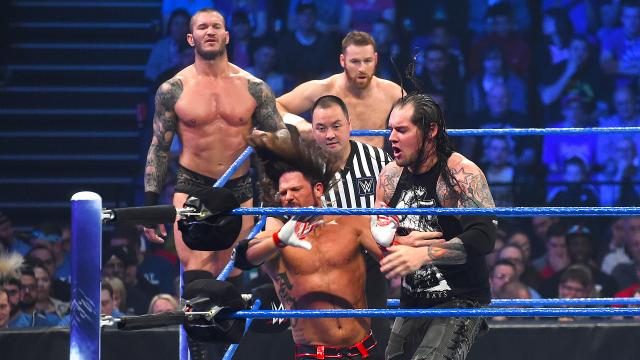 I thought the best match of the week on was the 6-man tag, because it had Kevin Owens, who should be teaching master heel classes, AJ Styles, not arguably the best wrestler on earth right now, Sam Zayn, who is so damn lovable despite his skanking tendencies, Jinder Mahal, who could be at the beginning of a great run if he could reel in those elbows, and Randy and Corbin. Corbin works well in these kind of matches, I’ll give him that. I’ll also give Randy half a point for at least wrestling on the show he’s champion of. That’s not a dig at Brock. OK, maybe a little one.

The actual real best thing in WWE this week was the second episode of Fashion Files. The Fashion Police can do no wrong, as far as I’m concerned. They are legitimately funny, They’re solid as hell wrestlers, and they seem like they’re having a good time. I can not express how much that makes a difference for me. It’s why Jericho turned in some of the best stuff of his career with KO, because fun is infectious. 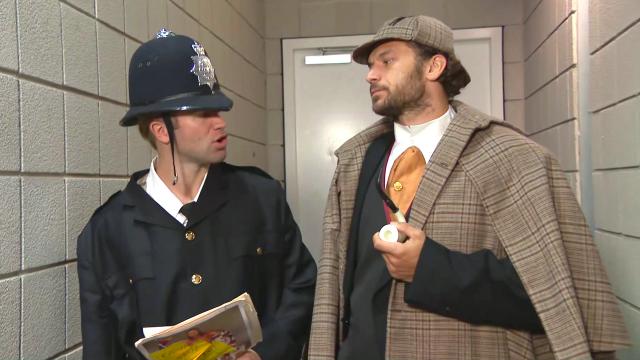 Both these guys have been undercover killing it with anything they’re given since before they were Fandango and Tyler Breeze, over at NXT. After Payback, if they just ran a 3 hour Fashion Files and called it Backlash I’d probably call it the best PPV of the decade. But they won’t, so I’ll have to settle for a match against The Uggos Usos for the tag belts. Honestly I’m just happy to see ‘Dango & Breeze finally get more exposure. Also, The Usos have basically become extras in Drake’s reboot of Friday.

I guess that leaves Shinsuke Nakamura NOT wrestling again. For over a month we’ve just had Ziggler pretending to not know who Nak is, like he’s been pretending to know how pro wrestling works. For over a month we’ve had WWE creative treat Shinsuke like a WWE action doll, and they don’t wanna lose any resale value so they keep it in the packaging. As a grown adult boy who has spent way too much money on action dolls, there’s no way I’m gonna keep them in the friggin’ box. I’m wanna play with that shit. Why is Nakamura being kept in the packaging??? It’s not even the original Japanese version!!! 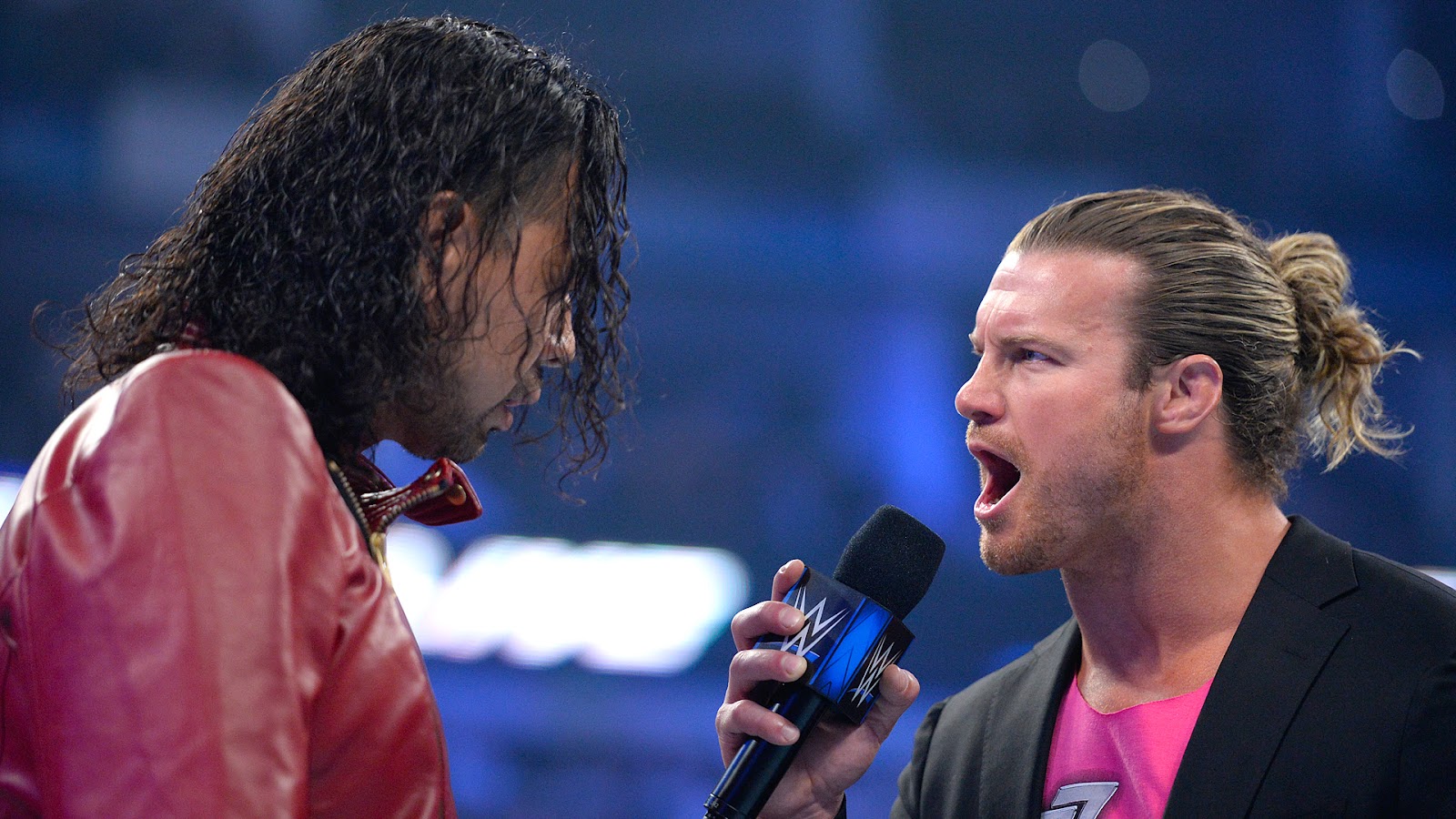 I would usually guess that he’s slightly injured, and they’re just buying time, but we know that’s not true. Reports of him and Ziggler killing it in dark matches have been flooding the airwaves. I WANT THAT NOW ON MY TV. Shinsuke Nakamura is one of the few former NXTers that I’m not scared about his move to the main roster, I’m excited to see how crazy it can get. But since anything I want to see happen never does, and everything I predict is always wrong, I have to wait another week before Nak gets all badass Mick Jagger on everyone.

That’s it for this week, Monday’s just around the corner. It’s a go-home week for Smackdown and a regular Raw, so probably even less will happen. Maybe i can just copy/paste this week’s article and no one will notice?