Welcome to Enuffa.com's 2nd Annual look at the NJPW Best of the Super Juniors tournament, where 16 Jr. Heavyweights tear the house down over a period of three weeks.  For those of you not familiar, BOSJ is two round-robin blocks, where each wrestler faces the other seven in his block.  Two points for a win, one for a draw.  Whoever has the most points at the end faces the winner of the other block in the Finals.  The 2017 field looks quite stacked, particularly in Block A, so we should be in for some spectacular matches. 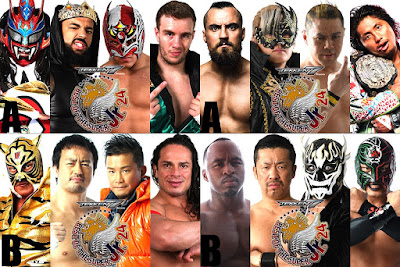 My colleague Landon Wayne (@LSWayne21) and I will break down each competitior and our predictions.  Let's get to it!

Justin: The young lucha has impressed me thus far, particularly in his unsuccessful challenge for Takahashi's Jr. Title in February.  Any match he's in should be worth watching here.

Landon: I feel like the man is intent on killing himself in the ring, and he might die sometime on this tour between Ricochet, Ospereay, and Takahashi. I would’ve put him in the other block personally to keep him away from Takahashi, but Gedo must have a plan.

Justin: The Champion has had a stellar 2017 thus far, with numerous excellent Title defenses.  He's become as much of a division cornerstone as Kushida in a very short time, and he carries himself like a major star.  Generally the Champ isn't one to bet on in these tournaments, since the point is to elevate someone to challenge him.  But I certainly wouldn't complain if the "Time Bomb" made the finals.

Landon: Naito’s psychotic godson has become my favorite Junior in New Japan since Wrestle Kingdom. The men he’s being put against for the next month is spectacular, though again very confusing. I would think he’d be in less stacked Block, to leave something to be desired for Dominion. It’ll still be sublime to see him kill himself to kill the others.

Justin: The 50+ veteran still has some legs and should produce some solid work against his young competition.  I don't see him as a block leader though.

Landon: He’s claimed this might be his last BOSJ. I hope Liger takes the levels up to 11 for this run, he’ll need it to keep up with the rest of the block.

Justin: The ROH TV Champion makes his NJPW debut in this tourney.  I must confess I'm not all that familiar with Scurll's work but I've read good things.  Hopefully he'll have an Elgin-esque showing in the tourney and we'll see more of him in New Japan.

Landon: I love The Villain. Love. Love. Love. He’s the best Anti-Junior we could have here. He has enough of an aerial offense to keep up, but most of his deal is around breaking an opponent down. It’s gonna be entertaining seeing him go up against the quicker wrestlers in his pool and watch how they work around someone who won’t try to play their game.

Justin: Any Ricochet match here is gonna be must-watch. He has to be considered one of the big favorites to win the whole thing and I can't wait to see the tournament rematch with Ospreay, with whom he stole the entire tour last year.

Landon: It’s Ricochet. Whether you’re a NJPW fan, or a ROH/RevPro/CMLL/PWG fan led into the BOSJ because of the hype, you had to have accidentally walked into a Ricochet match on your way here by now. I feel like I don’t need to say anything about him at this point.

Justin: Eh, I'm not terribly excited about any of the Suzuki-Gun guys here and I don't see any of them coming close to winning this.  I hope the outside interference is kept to a minimum in their matches, because that stuff's gotten old.

Landon: You’re fucking hilarious Justin. I am not very optimistic about Suzuki-Gun’s matches, because of the mentioned interference bullshit. But I want to like Taichi. He’s got the look of a Final Fantasy mid-game boss and goddammit that aesthetic just shouts to me. But by Misawa’s ghost does he have negative charisma.

Landon:  The Only Singles match I’ve seen Taka in was against Agulia.

Justin: Last year's winner has a chance to repeat and should steal the show several times.  Ospreay vs. Ricochet, Ospreay vs. Dragon and Ospreay vs. Takahashi are three big pairings I'm excited about.

Landon: He has never not impressed me. From Day one at Dontaku last year, I’ve always liked Will Ospreay. He’ll be fun to watch as always (He and Scrull have enough backlog material to go on forever) but I don’t know where he’ll place.

Justin: Another dude borrowed from ROH (though he did appear at WK11 under a mask), ACH should do quite well in this tourney as far as match quality.  I certainly don't see him winning it but some strong showings could make him a frequent NJPW visitor.

Landon: Officially, ACH is considered a free agent. However, if I want to fit Marty Scrull into my narrative as a RevPro representative, ACH can be considered the ROH representative for the tournament. And what a representative ACH is. If Ricochet has insane speed and technique in his aerials, and Ospreay has just the speed, ACH has the technique. Everything ACH does seems so smooth and natural, and no movement is wasted in his matches… Not that I’m biased.

Justin: LIJ's #2 Jr. Heavyweight seems a bit in limbo since Takahashi arrived.  I'm curious to see if the two of them feud eventually.  In the meantime Bushi's been a solid team guy who delivers consistently.  I guess he could be a dark horse candidate.

Landon: Poor fucking Bushi. He’s been the fall man on LIJ’s multi-mans since his debut with the stable, and Takahashi’s entrance into the fold made him practically tertiary. A strong performance in this year’s tournament could do something to remedy that, but I don’t expect it to.

Justin: Another SG guy.  His matches will likely be rife with interference and he won't be a points leader.

Justin: I'm guessing this tourney will be about the redemption of Kushida, who went from THE Jr. in the company to losing a rematch with Takahashi in under two minutes.  He'll clearly be in the finals and he's gotta be the favorite to win the whole thing.

Landon: There’s an inherent problem with Aces. They can have great matches, they have great presence in and out of the ring, and they typically help their companies into great times. Unfortunately, they have a tendency for title reigns that are only interrupted by wrestlers on flukes or flashes. We saw this with KUSHIDA in 2016; losing it to BUSHI only to win it back at the next big show. If we look at Kenny Omega’s 2015 run, Kushida was even on the other end of this as the brief winner.

What we have in this year’s tournament is a cowed Ace, a man who lost his belt and was defeated handily in the rematch. Kushida has a vulnerability here that he hasn’t had since perhaps before his first title reign. It’ll be really interesting to see where this setup leads. He will, as always, provide great matches and will be the man to watch in this block. However, if there’s a time for someone to make their name beating the former champ, it might be this year.

Justin: Taguchi is still one of the most purely entertaining guys in New Japan.  He'll never be the star of the division but he'll give you a laugh without being a laughingstock (like say, Santino Marella).  He made the finals last year but clearly wasn't gonna win the whole thing.  I don't see him duplicating that feat this year.

Landon: If you haven’t been around to see Ryuske with his working shoes on, prepare for a month of treats. Taguchi is possibly my favorite Junior in New Japan right now, and I hope he racks up a lot of points this year, like he did last year. If you need a primer, go to his run in 2014. From when he beat Prince Devitt, his title win and defenses, and cap it off with Wrestle Kingdom 9.

Justin: Tiger Mask will be the Liger of this block - good for some fun matchups but no chance of winning.

Landon: I like Tiger over Liger any day. His offense lends itself to longevity more than Liger’s (more ground and strike base will do that for you), and that alone puts his work rate above Liger. IV is starting to get on in years himself, and with Ibushi as W, it’s possible this is here last year as well.

Landon: Along with Dragon Lee, he is CMLL’s representative in the tournament. Barely missing the finals last year with a loss on the last day, Volador Jr. may find himself in the same position this year. Still a fun watch for those looking for filler.

Justin: And finally the fourth SG member in this tourney.  Jeezus, that's gettin' to be a lot.  I don't see any of them as major factors, but hopefully the outside interference won't be too crazy.

Landon: I understand that Yoshinobu is something of a decorated NOAH Junior, and I’m looking foreward to watching him work in an isolated environment like the BOSJ. He’s the one member of Suzuki-Gun where I hope the interference smoke and mirrors is completely dropped, or at least kept to a minimum.


Prediction for the Finals

Justin: Kushida's winning B Block, no question.  A Block will come down to Ospreay, Takahashi, or Ricochet.  Interestingly the three favorites not named Takahashi are the last three BOSJ winners.  I'm gonna go ahead and predict Kushida vs. Ricochet as the final match, with Kushida earning one more Jr. Title shot at Dominion.

Landon: Okay, listen. I like Kushida, but I don’t want him near the finals. Kushida/Takahashi 3 is going to happen somewhere down the road. It doesn’t have to be at Dominion, and it doesn’t have to be a result of the Best of the Super Juniors. I would endorse ACH or, honestly, Kanemaru to be the winner of the B block. ACH can be an awesome Dominion challenger for Takahashi, Kanemaru would lose in the finals but could be built up to be a contender somewhere down the road. A Block is a between Ospreay and Dragon Lee.  Either one of them could believably beat Kanemaru, or be beaten by ACH in the finals.

Dominion’s Junior Heavyweight challenger is going to be either ACH, Dragon Lee, or Will Ospreay.

These three guys are gonna own this Block.

Not nearly as much star power in Block B, but everything Kushida touches is gonna be worth watching.

Ospreay vs. Ricochet
Takahashi vs Dragon Lee
Scrull vs Ospreay

That's our take on BOSJ 24.  Hope you enjoy the shows!  Thanks for reading - comment below with your thoughts!