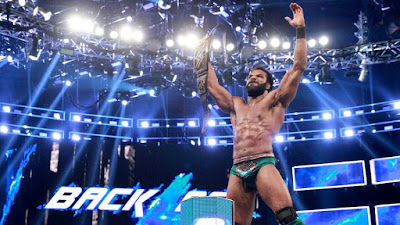 It's amazing I'm able to type this review, considering I threw my hands up in disbelief at the end of Backlash and haven't taken them down since.  The situation is beyond baffling and I don't think there's a more devalued championship in all of wrestling right now than the WWE Title (although the Universal Title comes close).

Before we get to that shit show though, let's look at Backlash's undercard, which was pretty good overall.

The show opened with Shinsuke Nakamura's long-awaited main roster debut against Dolph Ziggler.  The two had a solid back-and-forth match that never quite reached Great territory but was perfectly serviceable as Nak's debut.  I liked that they saved his first match for a PPV and that the announcers touted his unique skillset.  I wasn't crazy about Ziggler getting quite so much offense, as it seemed like they were going out of their way to protect him, when that's never been a concern of theirs before.  But this was a fine initial outing for Nak and I look forward to seeing what's next for him. 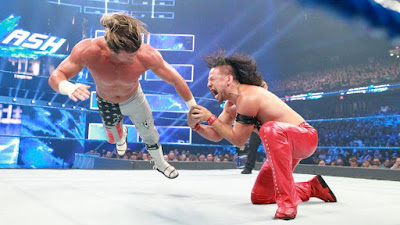 The surprise hit of the show for me was the Usos-Breezango Tag Title match.  The comedy element should never have worked as well as it did.  Breeze and Fandango have a pretty goddamn hilarious thing going here and it's nice to see them embrace something that on paper looks so stupid, and make it work.  This match won't win any awards, but it was highly entertaining and the crowd ate it up.  No complaints about this one.

Another match I was pleasantly surprised by was Baron Corbin vs. Sami Zayn.  Zayn was great as always, taking a beating better than anyone, but Corbin held up his end of the match, selling frustration with not being able to put Sami away.  The ending was really well-booked, with Sami hitting a boot to the face to create an opening long enough for the Heluva Kick.  I was glad to be wrong about this result.  Zayn should be one of the top babyfaces in the company. 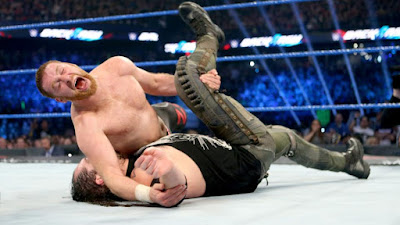 The 6-woman tag was fine for what it was.  They made it feel like a big faction war, which made up for its somewhat forgettable content.  Nattie and The Welcoming Committee got the expected win to further establish them as Title challengers.  Nothing spectacular but nothing wrong with this match either.

The Match of the Night as expected was Kevin Owens vs. AJ Styles.  This felt like the first in a series, so they held back a little, but it was still a very well-worked match and both guys got plenty of their stuff in.  I was glad to see this get the most time of anything, and I actually liked the countout finish.  Owens needed to retain in a way that protected AJ and this was a really creative way to make that happen.  AJ's knee gave out while he was standing on the table and he fell through one of the monitor openings, tangling his foot in the wires under the desk.  Damn good stuff there. 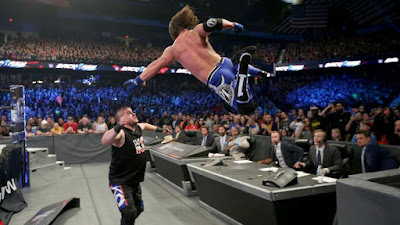 If you shut off Backlash after KO-AJ you'd have yourself a good B+ show.  Sadly the 6th match was pretty weak, and the 7th was just plain fuckin' stupid.

Luke Harper vs. Erick Rowan was a pedestrian effort between a very accomplished big man and a pretty generic one.  Harper looked slimmed down and light on his feet, while Rowan looked kinda bloated and sluggish.  I was glad to see Harper finally get a win - it's absurd they don't do more with him, particularly on this thin roster.

Okay, now for that main event.  The logic of this whole thing escapes me entirely.  WWE evidently wants to tap into the India market, and their plan is to take this career jobber they've done literally nothing with in seven years, and make him a shocking heel WWE Champion the Indian fans will rally behind.  Even though a) he's a heel and b) he's never done anything noteworthy ever.  And if this match was supposed to be his big coming out party, he showed me nothing to indicate he deserves a main event spot.  Literally anyone with any wrestling training could've had the match with Orton that Mahal had.  The fact that WWE took the one guy they have of Indian descent and decided arbitrarily that he's who they want representing the entire company just reeks of pandering to that market.  "Hey, this guy is vaguely the same nationality as those fans, therefore they'll love him!"  Remember the last Indian wrestler they pushed?  The guy who could barely walk?  Way to insult the intelligence of an entire country, dolts. 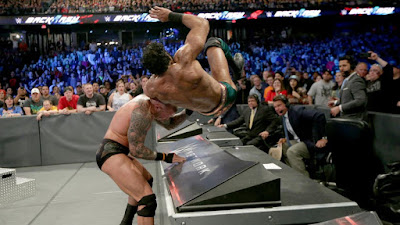 Two other things disturbed me about this match.  The first was how carelessly Orton dumped the Singh Brothers on their heads on the announce tables.  After the second one Orton visibly made an "Oops!" face after nearly murdering a guy.  Yeah, remember that time Ken Kennedy screwed up in the ring and Orton basically got him fired for it?  This was worse.  The second thing was Jinder Mahal's overwhelming case of acne on his back, shoulders and arms.  That shit was everywhere and makes Mahal look like a Wellness Suspension waiting to happen.  Someone in the company must realize how bad that looks when coupled with Mahal's stunning physical transformation over the past year.  For that to go ignored further exposes the company's hypocrisy in this area; they're willing to look the other way as long as it doesn't fuck up their whole India plan.  What a coincidence Mahal was in there with Randy "Still Two Strikes" Orton.  Someone get this guy a cup to piss in, stat.

So as it stands, both of WWE's top championships are now pretty worthless.  The Universal Title has been defended one time in the last three months (after being held by a 50-year-old who hadn't wrestled a real match in 13 years), while the WWE Title has changed hands every calendar month this year and is currently held by a guy whose main roster win-loss record is 80-368-5.  That's 80 wins out of 453 matches, or a 17.66 winning percentage.  So yeah, it's safe to say that wins and losses in WWE mean exactly DICK.

I'd be fine with Mahal getting a big push if they did it carefully over the span of a year and if he'd actually improved enough in the ring and/or on the mic to justify it.  But neither of those things has happened.  Name me one noteworthy Jinder Mahal match, ever.  Go ahead, I'll wait....... No?  Can't do it?  Didn't think so.  The guy simply isn't good enough at this point to warrant a push like this.  You can't just move a wrestler from one show to the other and completely change his station in the company overnight.  Building people up takes time and discipline, and WWE apparently doesn't want to invest either one.  I guarantee that everyone who watches Smackdown either watches or at least follows RAW week to week.  We're all well aware that Mahal has been a jobber to the stars his ENTIRE run in this company.  You're not fooling anyone by moving him to the blue brand and suddenly pushing him to the moon.  Reminiscent of JBL's 2004 push, this came out of nowhere, ironically much like an RKO.

So was this better than Payback?  Yeah.  Aside from the main event I agreed with all of the booking and there were a few ***+ matches.  But the main event sucked, continuing the trend of nearly every 2017 main roster PPV main event being lackluster at best.  Elimination Chamber is the only PPV so far this year where the main event was the best match on the show.  That's pretty goddamn sad.  As is the dropoff in crowd enthusiasm from Saturday's NXT show to Backlash.  The very same building was nuclear 24 hours earlier but sat on their hands for much of this show.  Does this not bother Vince McMahon in the slightest?

Best Match: Kevin Owens vs. AJ Styles
Worst Match: Randy Orton vs. Jinder Mahal
What I'd Change: Oh I dunno, maybe pick ANY of the dozen or so more suitable guys to dethrone Orton?
Most Disappointing Match: I guess Nakamura vs. Ziggler because it was good and not great.
Most Pleasant Surprise: Breezango!
Overall Rating: 7/10