What team will the NBA rig the Lottery for this year?... (Hint: not the Celtics)

A long rant by B-Cuddy 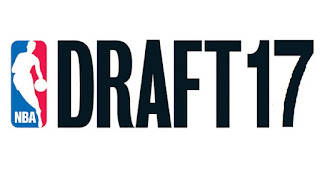 I’m not a big conspiracy guy. I think Oswald acted alone. Even Lloyd Christmas knows we landed on the Moon. The 9/11 conspiracy guys are just a group of assholes. The “Flat Earth” people are the dumbest fucks of them all. (Cavs point guard Kyrie Irving is one of em. When asked about his belief, he responded with something about people needing to do their own “research.” You see, in Kyrie’s world, a 20 minute YouTube clip amounts to more sophisticated research than all of Science…ever.) Basically, I have a hard time believing a giant number of people can keep a secret. Mostly because half my friends are like the god damn media. You know who you are. Having said all that, there is one conspiracy I believe in whole-heartedly; The NBA Draft Lottery is most definitely rigged.

Now hear me out. To rig the lottery, it wouldn’t take a bunch of people. The Commish, some underling, and a team owner/GM/President. It can be done. And I’m not suggesting that it’s every year. If that were the case, everyone would sniff it out. You got to be crafty. It all depends on circumstances. Here are some examples of when the lottery was fixed:

1. 1985 – The Patrick Ewing Lottery. The one that started it all, and the most famous. The very first Draft Lottery, in a Draft that had 1 transcendent star coming out. Patrick Ewing was the obvious #1 pick that year. The New York Knicks were coming off a terrible season in which the only people who went to Madison Square Garden were hot dog vendors and the homeless for warmth. Commish David Stern and the league were not about to let their biggest market continue to crumble. There are countless stories about some “frozen envelope” out there if you feel like going down a rabbit hole. 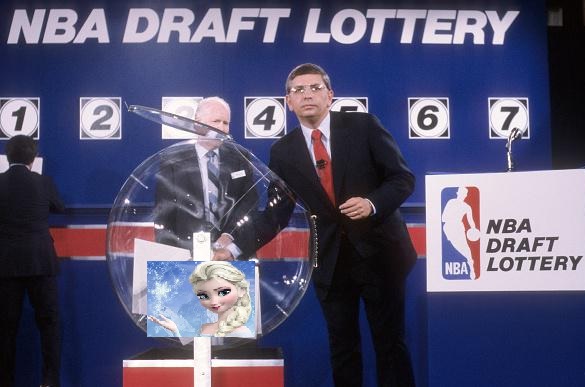 
2. 1993 – Shaquille O’Neal to Orlando. The Magic were an expansion team starting in the ‘89-‘90 season. And when you’re trying to grow the league in a new area, it helps if the team's good. What’s a better way to get good than landing a 7’2” phenom? The Magic were only the 11th worst record that year. And had just a 1.5% chance of winning the #1 pick. Apparently in 1993, people didn’t know Florida was a terrible state. Shaq figured it out years later when he bolted for LA. That’s what happens when your biggest attraction is a fucking mouse. 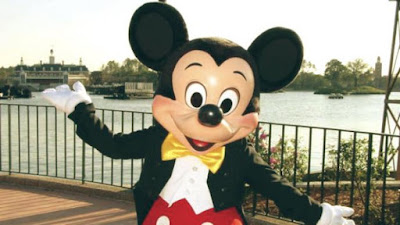 3. 2003 – LeBron James. He was the best high school prospect of all time. People put him in a class with Bird, Magic, and Jordan before he could buy a scratch ticket. He grew up in Akron, Ohio. Cleveland won the lottery. That lottery was as fake as LeBron’s hairline. 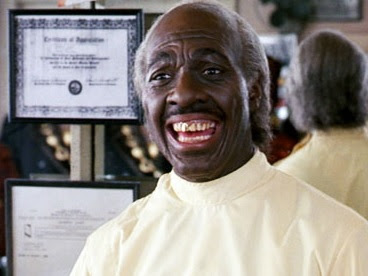 
4. 2007 – Greg Oden & Kevin Durant. This one offends me most since the Celtics had real odds to land one of the top 2 picks. Instead they got the fucking 5th pick. I can only complain so much since it led to the Allen & Garnett trades. Nonetheless…the Portland Trail Blazers were still reeling from the Jail blazer days when most of their team left in free agency to play for San Quinton. The Seattle Supersonics were up for sale. Conveniently both landed 1,2. The Sonics were subsequently purchased, and hijacked to Oklahoma City.

5. 2011 – Kyrie Flat Earth Irving to Cleveland. You’re going to notice a theme because Cleveland isn’t done on this list. This was the season immediately following LeBron ripping everyone in Cleveland’s heart out on live TV. The NBA felt bad apparently. How touching. 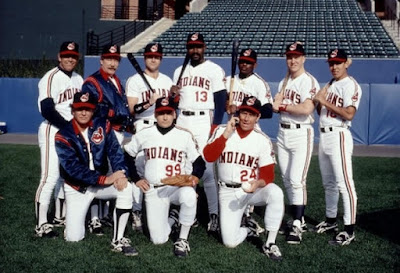 6. 2012 – Anthony Davis to New Orleans. Davis is a once a decade talent. A big man who can shoot, and play great defense. New Orleans had just been purchased a month prior by saints owner Tom Benson after having no owner for 2 years and being controlled by the league. Let me repeat. BRAND NEW OWNER BOUGHT A PREVIOUSLY LEAGUE CONTROLLED TEAM. Anthony Davis was the thank you gift for buying a franchise nobody wanted.

7. 2014 – Cleveland fucking Cavs again. It was no secret that LeBron James was contemplating returning to Cleveland. However, the Cavs roster still wasn’t great. They had Kyrie, but needed another legit star. You know how you get that star? You win the #1 pick, and waive it in a trade at some team. Funny how it all worked out.

8. 2016 – 76ers & Lakers. Last year’s draft lottery was a bullshit fix if I’ve ever seen one. In December of 2015, the 76ers hired Jerry Colangelo to be chairman of basketball operations. They did this because the NBA pressured them to do so. The 76ers were in the midst of the most blatant tanking run in league history. It made the Chicago Black Sox blush. And the rest of the owners were pissed since it was a huge black eye for the league. As a thanks for listening to the NBA, Philly won the #1 pick. (Weirdly, hours before the lottery supposedly took place, 2 people associated with Philly tweeted their excitement for winning the #1 pick. Joel “Horse Dong” Embiid & Dikembe “Who wants to sex?” Mutombo. I’ll let you google each nickname on your own). The Lakers were terrible that year. The league does not want the LA Lakers to be bad. Plain & simple. 2nd biggest market and one of 2 most storied franchises. It’s just better for business if they’re good. Last year’s draft was considered to generally be a weak one, with only 2 highly rated prospects. Of course Lakers landed one. I want to puke just thinking about it again. Even Vince McMahon thinks that some of those are fucked up. 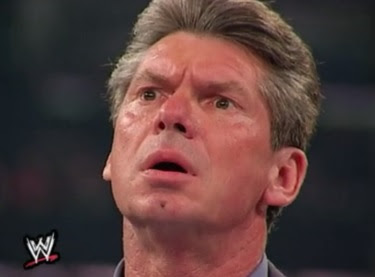 But finally, we made it to this year. Given the draft class is solid, and there are some intriguing franchise circumstances in the air, the draft will almost certainly be pre-determined by the higher-ups. Before I give you a rundown of how the fixing may go down, allow me to try and explain how the lottery is “supposedly” done.
·         There are 14 teams in the lottery. 14 Ping-Pong balls are entered into a machine. Each ball is numbered.
·         The machine is spun, or mixed, or whatever the fuck they do, before each ball is drawn, drawing a total of 4 balls.
·         The 4 balls create a number combination. That number combination is assigned to 1 of the 14 teams.
·         There are 1001 possible combinations. The team with the worst record has the most combinations assigned to them. The team with the worst record gets 25%. 2nd worst gets 19.9%, 3rd gets 15.6%, and so it goes until the 14th worst team gets 0.5%.
·         The lottery drawing is only done for the top 3 picks. After that, the order is just by the team’s record. So if you’re watching on TV, as they count down starting at 14, you notice a team with shit odds is weirdly skipped, that means they jumped all the way to at least #3, and someone in the top of the draft got fucked. Hard.

That’s as easy as I can lay it out. I’m not Will Hunting here for Christ sake. Anyways…at this point you might be asking, “Well how do they rig THAT?” Well I don’t know! But THEY do. 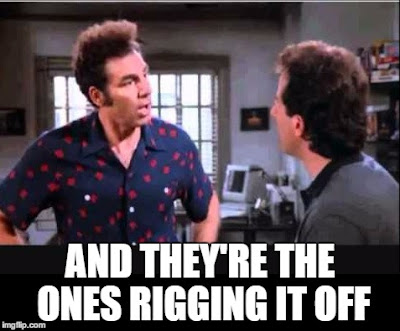 Here’s a comprehensive (term used very loosely) list of teams the NBA will want to fix the lottery for, accompanied by their supposed draft odds (SO), and their NBA fixing odds (FO), to land in the top 3…

Lakers (SO = 46.9%, FO = 1000%) – In a deep draft like this year, you may ask why the NBA would need to go out of its way to fix the lottery for a team with already the 3rd best odds. Here’s why: If the Lakers somehow fall out of the top 3, they have to send that pick to the 76ers. The Lakers could be bad and not have a draft pick in a loaded class? I DON’T THINK SO! Plus, NBA darling Magic Johnson is now GM for the Lakers. Also, FUCK THE LAKERS. God I hate them.

76ers (SO = 37.8%, FO = 50%) – I’m on the fence about the NBA throwing them another life jacket. With the 4th best odds anyways, they’re setup to get a solid player. The only reason I don’t have them as a certainty is because there are 2 teams behind them have a bigger fixed stench on them.

Knicks (SO = 18.3%, FO = 100%) – The Knicks fucking stink. And it’s been a long time since they haven’t. The owner is a god damn putz. The man in charge, Phil Jackson, is going senile. They literally can’t get out of their own way. The NBA won’t be able to help themselves from trying to salvage this team, and drum up interest in New York.

New Orleans Pelicans (SO = 4%, FO = 66%) – Here’s my dark horse. This team made a big splash at the trade deadline to get DeMarcus Cousins, which makes for an interesting pairing next to Anthony Davis. In theory, the team is only a couple players away from making some noise. Why help them? Here’s another team that has to give up their draft pick if they don’t leap into the top 3. But most importantly, rumors are the next NBA team to possibly go up for sale is this one. It’s the least valued franchise in the league. Basketball (sports in general) doesn’t work in New Orleans. I’m not sure why they keep trying. But the NBA won’t want them sold to people looking to relocate the franchise. So how else do you entice a billionaire to pay for the runt of the litter in a shit market? You sell roster potential, and the idea that winning will create the market. The only argument against the lottery being fixed for them is that the Sacramento Kings get their pick if it’s not in the top 3. Who are a perennial shitshow themselves. 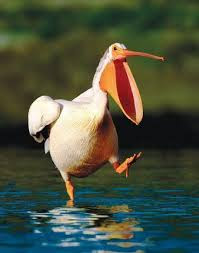 Side note: This is a pelican. What a dumb fucker.

Here’s my final prediction for the farce that is the NBA Draft Lottery:
1. Knicks 2. Lakers 3. Pelicans 4. Celtics (and only because they mathematically cannot be lower)

p.s. This was written by a Celtics fan that’s disgruntled by their lack of luck in the draft lottery. I will take it all back if the Celts get #1.