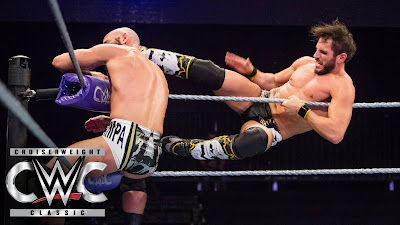 I’m just gonna get this one out of the way: Jinder Mahal is the new WWE Champion, and I don’t really have anything bad to say about it. I’m certainly not overjoyed, and I can think of about 20 dudes I’d rather see holding the belt, but Randy Orton isn’t one of them, so +1 there. I don’t hate Randy, I just dislike everything about him. My favorite Randy Orton moment is when he countered Seth Rollins’ Curb Stomp into an RKO at Wrestlemania 31. That’s it. I don’t have any other favorite Randy moments. I don’t even have any “not bad” moments. Actually, I might hate him.  So I’m gonna be behind pretty much any reason he’s not still Champ.

Most people DON’T like Mahal as champ, and in fact hate it, often citing his tendency to be a jobber and his win/loss record. Fair, but I’m absolutely cool with assuming that Jinder was a) released from WWE in 2014 for just that reason, b) went to the indies and actually dedicated himself to improving, and c) took a few months to get reaclimated to the WWE Universe. Once he did that, he saw his chance to strike and took it, riding a sudden wave of momentum and a couple Indian filmmakers right to the top. As a great heel for anyone besides Randy that he may face in the future.

Look, if grown men can suspend disbelief enough to accept the Undertaker at all, a man who can die and be reborn, wear goth vests but also ride a Harley, and control lightning, I don’t get why they can’t kayfabe buy that Jinder improved his skill and mindset by working hard over a fair amount of time.

My favorite part of this whole thing, though, is imagining who could dethrone the Modern Day Maharajah (which my friend Halley thinks is a dope gimmick, and I can’t argue that). A lot of people think AJ, but I think he’s got some time kicking on the dope as hell Smackdown mid-card before making another run at the top belt. Cena’s coming back, but he’ll hopefully be caught up in the Kevin Owens/AJ Styles/United States Championship scene, where he can work with guys that bring the best out in him. So let’s go for Sami. Sami Zayn would be able to tell a great story chasing Mahal for the belt. Honestly, just anything but more Orton. Orton with the championship reminds me of the kid in school who wears a leather jacket at a surprisingly young age, during that bag of flour/fake baby week. He hates carrying it around but knows it’s not worth the hassle if he forgets it on the bus. 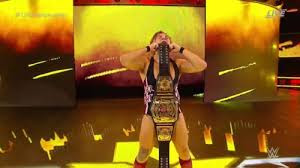 2 out of 3 of my favorite things that happened this week happened on NXT Takeover: Chicago. The first was the UK Championship match between the champion Tyler Bate, and heel extraordinaire, Pete Dunne. My favorite part of the match (outside of the actual wrestling) was the fact that you didn’t need to know anything about either wrestler. Going in, I barely knew them as the two most impressive dudes on the UK special they did a few months ago. The video packages before the match was all you really needed to know: Tyler Bate is the youngest champion ever for anything in the history of everything, and Pete Dunne is a pitch perfect heel, right down to his hair. The match garnered my highest rating possible, 11 episodes of Buffy The Vampire Slayer. If you haven’t seen it, I don’t know what you’re waiting for. Get on the trolley.

My second favorite thing was having my heart broken in half when Tomasso Ciampa turned on his #DIY partner, Johnny Gargano, finally revealing why he’s known as a pretty fucking great Talking Heads song. This turn was over a year in the making, when Ciampa and Gargano were randomly thrown together to enter the Dusty Rhodes Tag Team Classic. They didn’t win, but the formation of a future championship team was in the works, as they became real life best buds and slowly won the crowd over. Then the Cruiserweight Classic arrived and they were forced to face each other. In what was easily the most emotional match of the CWC, Ciampa lost as a result of NOT using his exposed knee with his finisher. This happened almost a year ago, making his decision to use his exposed knee during his turn on Gargano even more devastating. Take into account all the times DIY lost because Gargano tapped out, or when Gargano saved Ciampa from a ladder shot to the face, sacrificing himself, and it was a perfectly set up and executed heel turn. 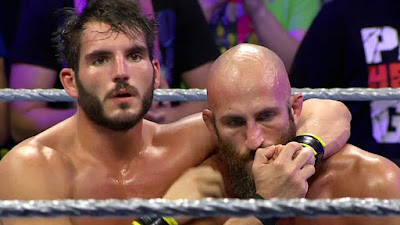 This broke me. I was so all in on DIY as a team, I forgot there was even a possibility of them breaking up. I was fantasy booking them as being Smackdown’s Tag Team Champions going into Wrestlemania against Raw’s Tag Team Champions, The Revival, for the best unification match of all time. I guess that’s in the toilet for the time being. The good news is their story has a third act, and it’s probably gonna make me cry. This is how you tell a fucking story.

My third favorite thing was The Continuation of Breezango and the possibility of more Fashion Files to come. Honestly, Breezango vs The Usos stole Backlash for me. I don’t think I’m gonna laugh that hard at a grown man slowly rolling back and forth on the mat ever again. Also, Fandango and Tyler Breeze are very good wrestlers. When he was in NXT, everyone scratched their heads at Breeze never getting a solid run, despite the fact that he was clearly one of the best wrestlers to never get a championship there. Even pre-Dango, Johnny Curtis was honing his character and putting on solid matches in NXT’s infancy. The fact that they are legitimately funny in and out of the ring makes them a very rare talent. Comedic wrestling is often looked down upon, but when it’s done correctly, it’s pretty fantastic.  Even the rematch on Smackdown was well done, and I totally thought they had it, a couple times.

Regarding the “important” show, Raw’s Extreme Rulez is this weekend and the main event is a Fatal 5-way between Seth Rollins, Roman Reigns, Bray Wyatt, Finn Balor, and Samoa Joe. The winner gets a shot at the Universal Title against Brock Lesnar at the July’s Fireballs pay per view.  If it’s not Samoa Joe or Finn Balor, I kind of don’t care. I can’t get hyped about Seth Rollins anymore for some reason I’m not quite sure of, Bray has all the momentum of a ghost tractor, and I don’t want to see Roman do anything other than be in a Shield reunion. 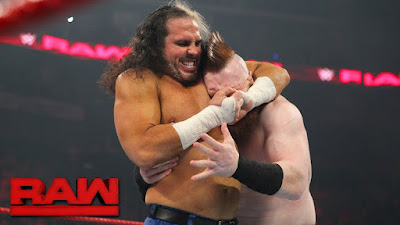 Most importantly, Cesaro and Sheamus have another shot at the tag belts at ER.

It’s against The Hardy Boyz.

Matt got to choose the stipulation after beating Sheamus for the right.

He chose a steel cage so Jeff can jump off something without the hassle of moving and setting up ladders.

There’s a very good chance this will be match of the night and Cesaro and Sheamus will become two-time Tag Team Champions.

The Hardyz may or may not ever get the rights to their “Broken” characters back.

Posted by Justin Enuffa Ballard at 10:47 AM