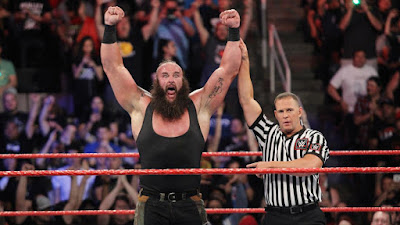 The show featured five solid matches, none of which climbed above ***1/2, a main event that was really more of an angle than a match, one of the most embarrassingly stupid "matches" the company has ever put together, and booking decisions that were confounding at nearly every turn.

Case in point, the opening US Title match between Kevin Owens and Chris Jericho.  This match was fine, but nothing more.  Their WrestleMania match was significantly better and more memorable, and when it was over Jericho actually won the US Title, meaning that as of this moment Owens is not moving over to Smackdown (despite WWE having already set up KO vs. AJ for next month, which I was eagerly looking forward to).  On top of that, Jericho is touring with Fozzy this summer, so he's presumably leaving again soon.  So where's the logic here?  I suppose something might happen on RAW where Owens regains the strap, but if that's the case, why the fuck bother with this at all?  It's not a good sign when I'm throwing my arms up after the very first match. 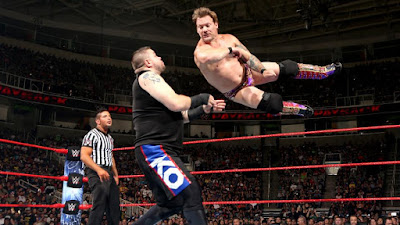 Next up was the Cruiserweight Title match, the first half of which was another classic case of WWE seemingly not understanding how to book a Cruiserweight match.  The action was kinda sluggish for several minutes as Neville relied on headlocks and such.  Nothing wrong with the heel using heel offense, but in a CW match there needs to be more movement.  The second half of the match picked up though, until Austin Aries locked in the Last Chancery, and Neville pulled the referee on top of him to draw the DQ.  I actually had no problem with this finish.  It fit Neville's character and allowed him to retain the belt again, without booking Aries as just another challenger.  This match was ok overall, just not nearly as good as last month's bout.

The next two matches were each better than the last, starting with The Hardy Boyz vs. Cesaro & Sheamus.  This was a pretty chaotic but well-worked match that saw Jeff lose a tooth off a Sheamus knee and Matt get a cut below his eye from.....something.  Anyway it was a stiff, enjoyable match, the Hardyz retained, and then Cesaro & Sheamus went full heel and beat the shit out of both of them.  I like this development.  C&S had been tweeners basically this whole time and that generally doesn't work.  So now they have a purpose and this feud has some juice to it.  The rematch should be quite good, and hopefully we'll see the Hardyz go "Broken."  This was one of the few high points of the night.

Another fine match (with sadly another finish that didn't make sense) was the Women's Title bout.  Bayley and Alexa Bliss put on a really nice little match - these two mesh pretty well together and Alexa's heel antics are a lot of fun to watch.  She still isn't as crisp in the ring as she could be, but she's got the heel character down perfectly.  One of my favorite moments was Alexa stepping on Bayley's hair and pulling up on her arms, and obnoxiously counting to five along with the ref.  It's little things like that, that make Alexa stand out.  The match ended after Bayley took a header into the ring post and Alexa capitalized with a DDT, becoming the first woman to win both Women's Titles.  But here's where I have a problem with this - why are we doing YET ANOTHER title change with this belt?  This thing's jumped around about a thousand times in the past year, can we keep it on one person for a while?  And what is Vince's obsession with jobbing people out in their hometown? 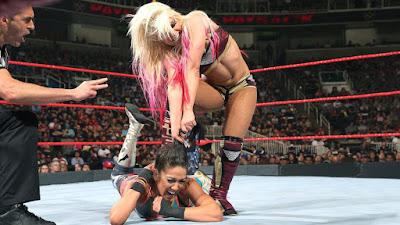 I've decided Vince McMahon is just a truly dysfunction human being.  He thrives on negative energy and resentment.  "Oh, one of our Champions is wrestling in their hometown?  Take the belt off 'em!  The fans don't like our top babyface?  Keep him the top babyface and then claim he's over because he gets a reaction!  This other guy is actually likable?  JOB HIM OUT!"  Vince is one of those people who would rather piss people off than make them happy.  I guess pissing them off is easier, and in his mind a negative reaction is just as good as a positive one (Clearly since that's his rationale for keeping Reigns a babyface)?  I really don't understand how a person can make such a conscious effort to be an asshole at every turn.  Fuck's sake Vince, go get an ice cream and lighten the fuck up, will ya?

What happened next was almost certainly one of the worst segments this company has ever produced, and furthermore it was a ripoff of something TNA did better (How pathetic does your effort have to be when TNA's version is superior?).  Randy Orton arrived at the "House of Horrors" in a limo, well after dark, despite it being roughly 6:30pm PACIFIC TIME, and crept interminably slowly up to the structure, complete with cheesy horror movie background music (and the unintentional hilarity of the cameraman's visible shadow on the wall - what is this a fucking Ed Wood movie?).  Eventually Wyatt attacked him inside and they had a sloppy brawl reminiscent of the idiotic Rock-Mankind Halftime Heat show from 1999.  The fight seemingly ended with Wyatt tipping a refrigerator over onto Orton and escaping the house, commandeering the limo and demanding to be driven to the arena.  To be continued, unfortunately..... 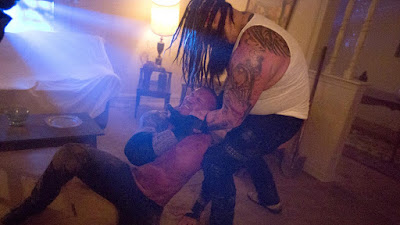 The Match of the Night (just by a hair) occurred next as Seth Rollins faced Samoa Joe in a pretty old-school match where the monster heel works over a body part for most of the bout.  This wasn't anything spectacular but it was a solid ***1/2 match, and then of course the stupid booking seeped into the proceeding, when Rollins defeated Joe with a quick rollup, thus making Joe just another guy.  Awesome.  Wouldn't want a non-homegrown star to beat the guy who beat Triple H, would we?  Aside from that, this match was quite serviceable. 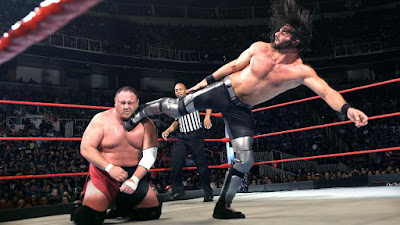 So then Wyatt arrives at the arena, because this unfathomably stupid match can only end in the ring, by pin, submission or forfeit.  Orton of course shows up, because apparently he can run as fast as a car, and they continue the fight for a few minutes before Jobber Mahal and his pals crash the party and cost Orton the match.  Question: Why the hell did they change Mahal's friends from The Bollywood Boys to The Singh Brothers??  There is nothing catchy or memorable about this new name.  Are they going out of their way to make sure this stable DOESN'T get over?

To put this in perspective, New Japan's IWGP Heavyweight Champion, in the first three months of 2017, delivered FOUR Match of the Year candidates.  Four in three months, including a match being hailed as one of the greatest bouts of all time.  By comparison the current WWE Champion's last two PPV showings have been matches any self-respecting "sports-entertainer" should be mortified to have on his resume.  If Orton vs. Wyatt doesn't win the Observer's Worst Feud award I don't wanna see the feud that beats it.  This whole thing has been about as much fun as a blood fart.

The main event pitted a severely injured Roman Reigns (Jeez, you'd think a guy who can't move one arm wouldn't be cleared to wrestle at all) against Braun Strowman, in what was essentially an eleven-minute beatdown.  This was fine for what it was - the work was convincing, Strowman looked like Godzilla here - but for the main event of a PPV this was pretty goddamn weak.  Seth vs. Joe or KO vs. Jericho should've gone on last if this is what they were gonna do here.  Reigns got a little offense at the beginning and at the end, but the rest was all Braun, who got the clean pin after two powerslams, and then continued to hammer the bejeezus out of Roman.  The live crowd by the way was solidly behind Strowman during this mauling, once again begging the question, "Why isn't Roman a heel??"  And don't give me the company line about how "Reigns gets more boos than anyone, he's the biggest heel in the company."  No.  No he isn't.  Reigns got killed in an ambulance attack and wrestled this match with one arm - he's clearly positioned as the babyface.  Stop trying to spin Reigns' overwhelming crowd hatred as a positive. 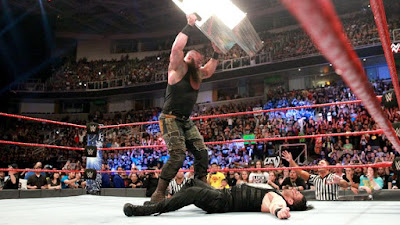 So yeah, Payback had a decent undercard but fell apart with the two biggest matches.  At best this was a thumbs-in-the-middle PPV made even worse by baffling booking (I went 2 for 8 in my predictions).

My colleague Landon summed this show up succinctly:

"Payback 2017 was proof that a) No one in this goddamn company cares about what they're doing anymore, b) We need to hang about 22 of the 28 writers, and c) This company is officially too big to fail, no matter how hard Vince's fantasy booking tries."

That's about the short n' skinny of it.


Posted by Justin Enuffa Ballard at 11:08 AM