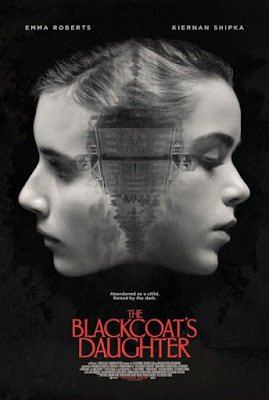 A24 Films first stepped into the horror game with Kevin Smith’s Tusk back in 2014. Since then they’ve released four more horror films including the newly released It Comes At Night. (review to come at a later date) All of them, with the exception of Tusk, have received favorable to incredible reviews. So when I saw the trailer for The Blackcoat’s Daughter it piqued my interest.

The film is the directorial debut of Oz Perkins (son of Anthony Perkins) and brings us a dark, suspenseful and somewhat mind-bending demonic possession horror film, with two different stories intersecting for a crucial and bloody climax. The first story involves two girls, Kat (played by Kiernan Shipka) and Rose (Lucy Boynton), who are left behind at The Bramford School, a Roman Catholic all girls prep school, over winter break while both girls are waiting for their parents to pick them up. The second timeline involves Joan (played by Emma Roberts), a girl who appears to have runaway from a mental hospital and is trying to get to Portsmith when she's offered a ride from two grieving parents who are on their way to Bramford. It's only when they reach their destination, does the unexpected and unnerving climax between the two story lines plays out to a bloody conclusion.

I’m not much of a fan of horror films because I find most of them corny and overdone, mostly relying on loud noises and quick cutaways to instill a sense of fear or dread in the viewer. Even though this film does use these methods a couple of times, overall I thought it was a pretty effective and entertaining horror flick. Nothing is over the top here. There’s no grandstanding or flashiness or any gratuitous scenes of violence. The film works in subtlety, slowly unveiling each layer of the story and of the characters as it moves along. This, in my opinion, is what makes good horror films, the lingering before the punch to the nerves.

Perkins’ set up at the beginning was great, using a nightmarish vision Kat has of a car accident to establish the torment she will endure through the film. Perkins takes his time, not going overboard with scenes and not insulting his audience’s intelligence. He gives you details for you to piece together on your own without dictating it to you, making the film’s buildup more enjoyable. How he weaves each character’s story line through the movie can cause one to question the timeline somewhat but it all comes together nicely at the end.

The performance by Kiernan Shipka takes the cake in this movie. Her soft quiet muttering is really creepy and did a good job drawing my interest in to see what’s going to happen next, especially when she calls the nun the “c” word, that’s when it really gets good. Her slow walk and skulking demeanor through the whole film causes you to wonder if this torment she is enduring is of her own doing or something else entirely? By the end of the film, this question is answered only by the viewer’s own interpretation which just adds to the enjoyment of the film.

I only have two issues with this film. The first is the lack of memorable scenes. There are two scenes that do stand out: when Rose sees Kat in the basement, and when Kat is in bed and her legs suddenly flip over her head, reminiscent of the spider walk scene in the director's cut of The Exorcist. However, neither one of those scenes are extraordinary and are pretty much staples in the horror film genre and both scenes are left on their own, not followed up by any worthwhile action or meaning.

Second, the kill scenes, except at the end, are pretty anticlimactic, which in fairness could be a good thing. There’s no big fight scene or a shot where the victim is struggling to hold on to their life, clawing at the ground. They just happen, which is disappointing in the sense that no creativity was put in for these scenes. Although, I could just be judging this film unfairly based on the sins of poorly made horror films.

Oh, and also the most boring and relaxed exorcism in movie history is performed in this movie.

Overall, this is a pretty good film to check out if you’re in the mood to watch demonic possession one night. It won’t win any awards or end up in any “best of” lists but it’s still pretty enjoyable.