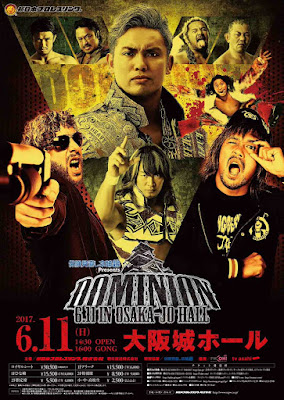 Landon: The ninth annual Dominion show proves to possibly be the biggest one yet. With a slew of WrestleKingdom rematches, the show is stacked top to bottom with matches for every title in the company. Justin and I are back to cover the stacked show this Saturday night, top to bottom.

Justin: This is gonna be goddamn incredible.  As good as WrestleKingdom 11 was, this show on paper may actually be superior.  We'll see.  Regardless, WWE is unlikely to put together any show this year that touches Dominion.

I'm not putting any effort into this one more than I have to. Opening, nothing 8-man.

Landon's Pick: Nagata's team. Should just be Tiger Mask W vs Tiger The Dark again.
Justin's Pick: Yeah, not at all important, this match, but should be fun.  Team Tigers win it.  When the hell is Kota Ibushi coming back as himself??  Please tell me he'll be in the G1!

This is gonna be a fucking war. Even more teams than Wrestle Kingdom, every faction in New Japan is bringing a team to this one. Two teams start, and after every fall a new team is gonna come out. I hope that LIJ either comes out at the end to squash whoever is tired, or runs through everyone (maybe murdering Taichi while they're at it.) 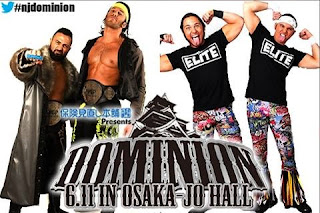 We need to have a solid Jr. Tag title run,and Roppongi Vice could be that staple team. Or it could be the Young Bucks, but I feel that Romero and Baretta are the better team to carry other Juniors to great matches. Plus they have the belts already and it makes that goal easier. 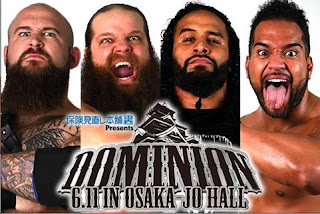 This is gonna be awesome. The Guerillas are getting better as time goes on, Loa in particular seems more comfortable in the ring now compared to a year ago. But War Machine remains awesome. I'm very excited to get a 2 on 2 match between these guys finally.

Landon's Pick: WAR MACHINE.
Justin's Pick: I'm diggin' what I've seen of War Machine thus far.  No way they should lose the belts yet.  Should be a fine bout. 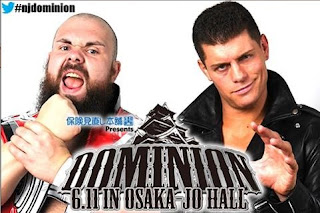 Cody is quickly becoming a failing act to me. I get that it might be on purpose, but so far we've had 2 singles matches with him, and the total time HAS to have been under 20 minutes. Nothing he's done has impressed. I'm trying really hard to defend him, but we sit on a very important match for Cody going against Elgin.

Landon's Pick: Cody, I guess.
Justin's Pick: This'll be make-or-break for Cody.  If he can't have a good match with Elgin he ain't NJPW material.  Cody wins. 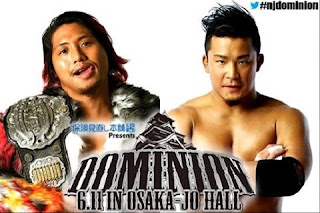 One of the rematches that gets classified under "Far too soon" on this show, Takahashi/KUSHIDA 3 should not really be on this show. Takahashi should continue killing men on his way to Wrestle Kingdom 12. Running through all of the Suzuki-Gun juniors would have been fun. But we might be seeing a contender for second best match on the show with this one. Takahashi, I love you. But apparently your Time is up.


Landon's Pick: KUSHIDA, unfortunately. It's been a great title reign,
Justin's Pick: Their WK11 match was really good but they have a chance here to blow it out of the water.  Hard to root against either guy; they're the co-custodians of the Jrs. division.  But I gotta think Kushida redeems himself here. 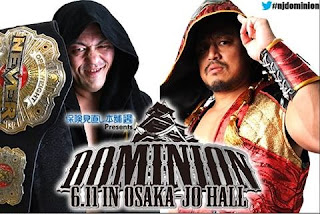 Everyone calm down, it's just a lumberjack match. But with CHAOS and Suzuki-Gun on the outside, this could be a powder keg. It'll certainly be fun, but I think Goto's time to be NEVER Openweight champion is over. Meanwhile, Suzuki holding the title has so much potential for the belt and for great matches.

Landon's Pick: The question is not 'will Suzuki retain?' It's 'Who can actually stop Suzuki?'
Justin's Pick: I don't think we've seen the last of Goto as NEVER Champion but it seems premature to take it off Suzuki already.  Suzuki retains for a couple more months. 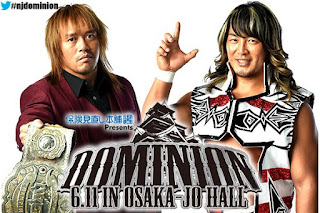 The longest running feud on the show. My favorite feud in this company. The Hero, and the Anti-Hero. The record stands at 7-5-1 in favor of Tanahashi over the past 9 years. I love these two when they work together, and this will most likely be my favorite match of the night, in spite of whatever Okada and Omega deliver. I can't wait to see what they pull out of their bag of tricks this time around.


Landon's Pick: Tanahashi wins it. It fits here, more so than WrestleKingdom, and we can start building a G1 win for Naito.
Justin's Pick: This is a similar situation to Takahashi-Kushida - their WK match was really, really good, but I could see them topping it here.  Ordinarily I'd pick Naito all day long, but since G1 is coming up and Naito is a heavy favorite to win that, I guess Tanahashi winning here makes the most sense. 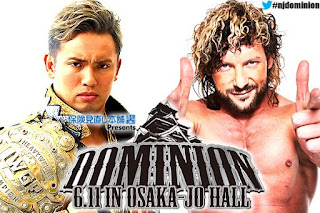 What's more to say about this feud? We've seen the build and seen what both men have had to say about each other. They're going to try and top their WrestleKingdom match and probably come short. It'll be fun though, as I see all Kenny Omega matches. Is it time to put the belt on Omega? I still argue January was. I'm not so sure about it now, though.

Landon's Pick: I know it repeats my predictions from January, but Omega to win.
Justin's Pick: Will they top their WK11 match?  I dunno how that would be possible, but goddamn it's gonna be fun to watch them try.  Omega is winning the belt here, 1000%.  Not sure he'll get to keep it past King of Pro-Wrestling, but I'd love to see Okada win G1 and challenge Omega for a rubber match at WK12.  But it'll probably be Okada-Naito in January.  Oh well.  Omega gets his big moment here though, and we're very likely looking at the second-best match of 2017.

Osaka awaits. The time has come. Nothing left to do but sit back and watch. With the G1 looming, this proves to be a launching point of destiny. Let's all go to...