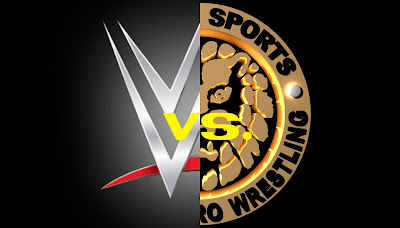 For years now, there’s been a complex pop-cultural relationship between east and west. Asian culture - especially that of Japan - has influenced much of popular English-speaking media, especially since the 1990s. In our world of wrestling, that relationship is especially notable. Japan and America constitute two of the three major “wrestling superpowers” of the world and, as such, the two influence one another in a myriad of ways. In an intensely populist entertainment form such as professional wrestling, the tastes of the paying customer can have a profound effect on what works and doesn’t work in each context, and what gets carried over from one to the other.

It’s been this way for decades. Something works in one country, and a savvy promoter translates it to their audience back home. This can be something as simple as the moves being innovated in one country making their way to the other, or a more profound shift in style and philosophy at either side of the globe. Sometimes, it’s even the case that figures from one culture influence another, as was the case with the Funk family injecting the US "southern style" into Japanese wrestling. As time has worn on and social media has become an incredibly useful tool in worldwide wrestling discourse, we have seen barriers between cultures and styles break down more and more. The last decade of American indie wrestling prompted the coining of the term "American Strong Style," a largely pejorative term to describe the insubstantial imitation of Japanese stars (such as All Japan Pro Wrestling’s Four Pillars, and later the likes of KENTA and Naomichi Marufuji) by up-and-coming wrestlers. Despite the negative connotations of the term, there is ultimately nothing wrong with the development of a style. The paying audience will always lean towards what it wants, and what works best for that audience will come out on top.

However, with the increased availability of international wrestling comes the issue of split fanbases. In the social media age, everybody has an opinion, and the platform to express it. As such, when a shift in booking or in-ring style doesn’t line up with the expectations of a fanbase, it can often be rejected quite vehemently. This is often a force for good, as was the case with Daniel Bryan’s road to the main event of WrestleMania 30 in 2014. However, it has also become a force for seemingly meaningless bickering over the more inconsequential aspects of pro wrestling. For proof of this, look no further than the Twitter account of Dave Meltzer, writer and publisher of the Wrestling Observer Newsletter.

Meltzer’s been a journalist for close to four decades, covering the wrestling industry in a manner that’s been invaluable to both the exposure of non-WWE wrestling to the general American viewer base, and the coverage of news that could very easily slip between the cracks of time. A less important element of his weekly output is his match write-ups, wherein he runs down the work done in the matches from the past week and sometimes attaches a star rating for those he watched himself. The elusive “five-star rating” at the top of his system has provoked much ire over the years, largely from those viewers feeling as though he neglects certain promotions. The result is large-scale bickering in response to the purely subjective opinions of one man who has dedicated his career to the journalistic coverage of wrestling. The recent expansion of New Japan Pro Wrestling into the western consciousness has widened the divide between fans of NJPW and fans of WWE, largely over the seeming snub of a WWE five-star match.

Of course, the Dave Meltzer Wars are just one facet of the uncomfortable spat between WWE and NJPW fans. As NJPW comes closer to gaining major exposure in the United States wrestling scene, it seems almost as if the small sect of WWE fans unwilling to watch anything but WWE become more and more defensive of their tastes. Be it the "Community Match Rating" system on Reddit’s /r/SquaredCircle group, which saw a number of entries rate every match at the recent Dominion 6.11 show a 0, or the immediate Twitter bombardment during last month’s NXT: TakeOver Chicago show to unfavourably compare the excellent Pete Dunne vs Tyler Bate match to the likes of Kazuchika Okada vs Kenny Omega or Tetsuya Naito vs Michael Elgin.

The unfortunate reality of this kind of immediate backlash is that it doesn’t really concern the quality of matches, but the idea of the matches and the perception of the promotions for which they take place. In the case of the Dunne/Bate match, many were on Twitter to complain of the lack of a five-star rating from Dave Meltzer before the show even ended. It was quite literally the case that some presupposed Meltzer wouldn’t rate the bout five stars, and criticised him in advance. This is the kind of attitude that accomplishes nothing, only stopping fans from branching out and discovering new wrestling they may not have at first appreciated. It’s a kind of territorial mentality, whereby loyalty is to the promotion instead of match quality, the kind of attitude that has led to WWE’s slow creative decline, as there is a complacent fanbase that serves as their safety net.

That’s not to say it’s only the minority of WWE fans contributing to the unpleasant divide. NJPW, as Japan’s own “big game” promotion akin to WWE, has its fair share of ugly support. Be it the western converts that dismiss all WWE wrestling as worthless compared to the NJPW product, or even the Japanese fans that refuse to branch out their own tastes, NJPW can be the centre of just as cultish a fanbase as WWE. What separates them, obviously, is that English-speakers cannot observe the extent of the negative NJPW fanbase due to the language barrier. Make no mistake, however, that there is very much an "elitist" quality to some NJPW fans too, dismissive of non-NJPW wrestling in Japan and America.

If you ask me, there’s no answer to this issue. It’s an unfortunate reality that wrestling will always generate fanbases loyal to promotions, which can lead to complacency after a fashion. It even serves to create a third type of viewer, one that sticks by the smaller promotions - Pro Wrestling NOAH, AJPW, K-Dojo, etc - as a means of avoiding the drama that comes with following the bigger names. Of course, that kind of viewer can just as easily become loyal to their own niche, and dismiss anything that gets too big for their tastes. It’s sad, but it’s very much a reality.

Ultimately, to be a fan of wrestling, you’ll simply have to find what works for you. Speaking personally, NJPW is my favourite promotion in the world right now. I love the Kings Road-influence in Gedo and Jado’s booking style and the diversity of the top cards. Nevertheless, I appreciate the different styles being tried out on the American and Japanese indies, the major Mexican promotions, and even in WWE itself right now. Perhaps it’s a personal feeling, but I cannot fathom remaining loyal to a wrestling product when it loses its appeal to the viewer. I hope that more people can come to realise that defending promotions rather than match quality is what creates complacency and ultimately failure for successful businesses, and stops great independent wrestling from truly breaking through. If there’s one thing to take away from this look at the unfortunate split between wrestling fans across the world, it’s that wrestling is one of the most malleable forms of entertainment there is. It can be presented in a massive variety of ways and still be successful. The tastes of one man such as Dave Meltzer aren’t needed to validate one’s own opinion. I hope more people can feel secure in what they watch - be it WWE, NJPW, indies, or something else entirely. I think it’s that ability to simply enjoy oneself with wrestling that will bring everybody together as fans of this great and unique entertainment form.

Posted by Justin Enuffa Ballard at 9:28 AM