WWE Money in The Bank 2017: At Least the Main Event was Good 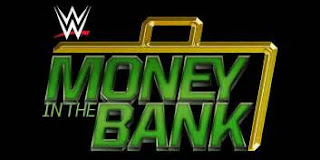 Just once, I wanted to watch a "Pay-per-View" and be happy. Just once I was hoping I could sit here and tune out. No notes, no criticisms, just watch.

You did this bullshit to yourselves. I know none of you 27 typewriter monkeys will read this, but I can fucking dream. And maybe other people will find amusement out of this.

You know how surprisingly good this shit was? You realize how low expectations were? The opening video package was great for setting up why these women wanted this briefcase. And I'll be the first one to admit that everyone looked great in this match. Tamina especially came out of nowhere to look great in the opening minutes of this, and everyone did a great job bouncing off of her. The action was above average, even for a ladder based match, and there was never a point where I felt lost or out of it with the action. 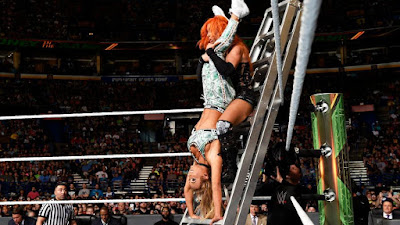 For those who missed it, James Ellsworth dumped Becky off the ladder in the middle of the ring (which pissed me off enough as is, but I understand), and proceeded to climb the ladder himself, grab the briefcase, and toss it down to Carmella. The bell rang, the crowd outraged. Then there was confusion, as the refs talked.


The New Day (Kofi Johnson and Big E.) vs The Usos for the Smackdown Tag Team Championships

I didn't like the Usos going into this match, but I'll be damned if the action didn't win me over for the Samoans. They did a great job of isolating Kofi and just flattening him with a whole lotta awesome. Then Kofi made the miracle tag and Big E ran WILD. Killed both Usos, speared one through the ropes, several really good near falls were making this a really goo m--- Nope.

Midnight Hour, Uso 1 pulled Kid Dynamite Uso A out of the ring, and we get a Count Out. Because we can't let the New Day lose, but we don't want the Usos to lose the belts. So we need a countout where both teams look bad.

"Oh, but you liked the AJ/KO ending from last month and that was fucked!"

Yeah, two things about that ending, Blueballs. First, it was the only true fuck finish on the show, and shocker of shockers that meant it left an impact. Secondly, it was an ending that lent itself to a follow-up match in the future. Things weren't resolved here, and the question of who the better man really is wasn't answered. Owens took the cheap win, but he didn't intentionally set up that cheapness. Here? The Usos were done. They lost. They took the cheap because they needed to take the cheap. That's the difference.

And where the fuck has American Alpha been?


Naomi vs Lana for the Smackdown Woman's Championship

That's a pair of Good Bibles that went into the ring.
This match wasn't as good as the previous two. Lana is better than the car wreck she would be, and Naomi is improving still. It was a basic match and it played out as you'd think. Shine, heat, comeback. There was a near fall by Lana from a sit-out Spinebuster, then Carmella came out. At this point, if this had been a third fuck finish in a row, I'd've stopped watching right here. However, it was only a tease, and in the end didn't entirely lead to the ending of the match. Naomi got the submission win for the first clean finish of the night.

Jinder Mahal vs Randy Orton for the WWE Championship

The body of this match doesn't matter. It was neither better nor worse than last month's match, though Jinder's entrance was much cooler.

The point is this; the finish was nearly identical to last month's match.

RKO
Pinfall not secured.
Randy kills the short people
Jinder hits Cobra Clutch Slam
Gets a three count that seems neither convincing or worthy to put Orton out. 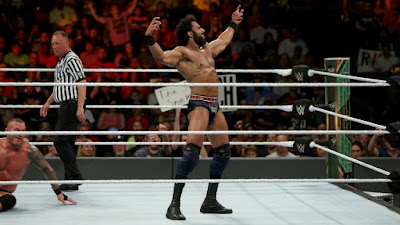 Do you fuckhats think we're stupid? Like we wouldn't notice? This was Jinder's first title defense, and it only showed me he was just another guy who has neither the proper setup, momentum, technical skill, heat, or any truly outstanding aspect to him that makes him an appropriate WWE champion.

(Note before you come after me: No disrespect is meant towards Raj Dhesi. I am confident that in 3-5 years, he'll reflect on this period on Talk Is Jericho and agree with me that he was not ready.)


Promo for Great Balls Of Fire where, I swear on the mask of El Local, the Raw wrestlers had no fucking clue what the song "Great Balls of Fire" was. They WROTE THIS SCENE, where the reference the company is making is too old for the current performers to know.


Breezango vs The Ascension

This match went about 5 minutes for Christ knows what reason other than we needed a piss break, I sat through it because I hate myself. You didn't miss much, your piss or your nachos were absolutely more important. Match ended with a roll-up on by someone on someone, who fucking cares?

[1/2 a fuck finish is given for a nothing match that ended in a heatless roll-up. I feel fucked out of my time.]

Bless these men for trying as hard as they did. These six put everything they had into this main event. And the crowd seemed to really enjoy it. I sure did. It was insane fun, and there is still a lot of hype behind Shinsuke. And, wouldn't you know it, that when your guys are over and do really cool things that lead to a logical ending, it turns out to be a good product. 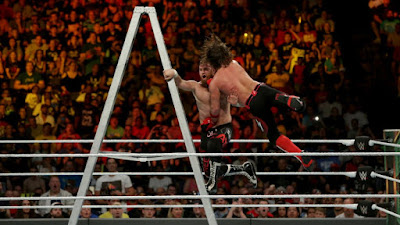 I'm sorry, the main event content was typed the afternoon after. My anger's been replaced by smoldering contempt, and that doesn't fuel a fire of scorn, just the opposite really. Corbin won, and he'll go to have a 20% win rate until he cashes in, where we're supposed to no longer look at him as a geek.

I'm done with this shit. Justin, if you got anything to add, go ahead.
I'll be meeting with Captain Morgan if anyone needs me.


Justin: Alrighty then, I will.

This was another in the long line of completely skippable 2017 WWE PPVs.  Aside from the main event there wasn't anything anyone NEEDED to see, and even that's being slightly generous.  All six guys in that match worked hard, Nakamura came off like a big deal, as did his interaction with AJ.  Loved all that.  Then Baron Corbin pushed over the ladder with both guys on it and simply climbed up to grab the briefcase (despite having some difficulty unhooking it).  It was a very flat finish to a very entertaining match.  And of course, the least deserving guy walked away with the briefcase.  I'd be more concerned about this if WWE had Clue #1 about how to book a Money in the Bank winner, but they don't.  So really Corbin got demoted to months of losing, while AJ and Nakamura created a moment together. 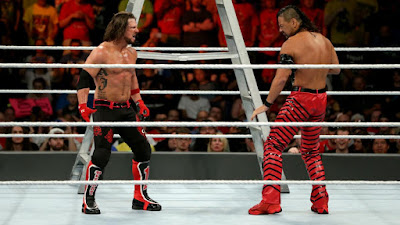 But the Smackdown brand is full of unworthy challengers and top champion.  Corbin, Carmella, Lana and Jinder are all being pushed, and not one of them has any business main eventing a PPV.
With Lana and Carmella being shoved into the Title picture it feels like 2009 all over again, when Vince and Dunn almost exclusively saw the women's division as eye candy and put all the serious female athletes on the back burner.  What does it say for example that the first-ever Women's Money in the Bank match ended with a man climbing the ladder and unhooking the briefcase?  In and of itself this type of ladder match win for a heel isn't a problem, but booking this in the inaugural women's match of this type is just a slap in the face.

The Usos getting counted out to retain the belts isn't a problem in and of itself either, but coming right off a screwy finish in the previous match is overkill.  Did the "producers" not talk to each other to make sure they weren't burning the audience out on lame finishes?

Evidently not, since the WWE Title match also had a bogus finish that was an EXACT DUPLICATE of the WWE Title match last month.  The only difference was Orton only suplexed one Singh brother on a table and RKO'd the other.  But for the second straight month Orton looked like a moron when he re-entered the ring only to walk into Jinder's Cobra Clutch Slam (one of the weaker-looking finishers in the company I might add).  Did the "producers" of this pitiful excuse for a WWE Title match not watch the previous one?

I continue to be baffled at WWE's cosmic ineptitude in presenting one of the greatest talent rosters they've ever had.  How in the goddamn world are average talents like Jinder Mahal, Lana, Carmella, and Baron Corbin getting pushes right now with so much competition on this roster?  Are they actively trying to sink Smackdown?

Going from last week's Dominion PPV to this, it doesn't feel like I'm watching the same industry.  WWE continues to fumble around with even the most basic aspects of good presentation.  And they wonder why their ratings keep tanking....

Best Match: Men's MITB
Worst Match: Breezango vs. Ascension, but then they only got five minutes
What I'd Change: Carmella and Corbin should not be briefcase winners at this point, Lana COULD be a solid hand but should be built up in the traditional fashion until she gets there, and WWE needs to admit to themselves that this Jinder experiment is a bust.
Most Disappointing Match: Women's MITB
Most Pleasant Surprise: How into Nakamura the crowd was
Overall Rating: 5/10
Posted by Landon Wayne at 3:59 PM