Welcome to, God help us, ANOTHER edition of WWE Predictions here at Enuffa.com!  Between the decent Extreme Rules two weeks ago, the AMAZING NJPW Dominion show last week, and Money in the Bank this Sunday, we're fully in the midst of a wrestling overload.  This show better deliver.

This show looks pretty solid and streamlined on paper, with only five matches, three of which should definitely be worth a watch.  Sadly the WWE Title match isn't one of them.  This Jinder experiment has predictably been kind of a wash.  They aren't even putting him in the main event segments on Smackdown and the ratings have been stagnant.  Not sure if his holding the belt has moved the needle in India as intended, but the US fans just aren't that into him.  Funny how no one gives a shit when a jobber to the stars suddenly gets pushed to the moon out of nowhere.  It's almost like something out of Pro Wrestling 101.

Anyway this show is historic in that it will feature the first-ever Women's Money in the Bank match!  This could either be super cool or a train wreck, but there's enough talent in this match that hopefully it'll go well.

So let's get to the picks.  We have another prognosticator joining us going forward, our own Dave Moore (brother of Dan Moore, and I hafta say a much nicer fella).  [Dan Note: Hey, fuck you!]  {Justin Note: See??} 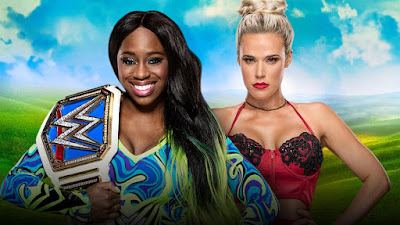 Ummm, okay.  Lana just debuted on Smackdown as a wrestler like two weeks ago and she's already got a title shot.  Well, given who the SD champion is I guess this isn't that outlandish.  All bets are kinda off on this one.  I could easily see them hotshotting the belt to Lana.  I hope cooler heads prevail, but since WWE is in a "Throwing shit at the wall" mood lately, let's go with Lana.

Justin: Lana wins
Dan: Naomi cuz I like her glowing behind.
Landon: Naomi defends. The Hotshotting comes later in the show.
Dave: Naomi


Smackdown Tag Team Championship: The Usos vs. The New Day 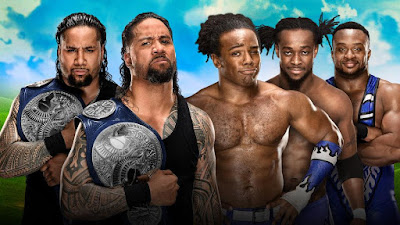 Dude, what the hell happened to American Alpha?  And how pissed is Triple H that this accomplished team he put so much work into at NXT is barely even on the fucking show now?  I get that you want to feature New Day heavily after their jump to Smackdown but Christ....  This match should be solid.  We've seen it before ad nauseum in 2015, but the roles are reversed now.


Women's Money in the Bank Match: Charlotte vs. Becky Lynch vs. Natalya vs. Tamina vs. Carmella 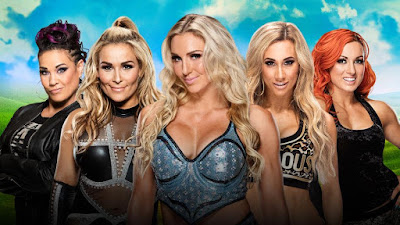 This should be pretty fun.  Charlotte, Nattie and Becky are all very accomplished and should be able to direct most of the traffic.  Tamina's a solid hand.  Carmella is good with character stuff.  As clusterfucks go, this'll be alright.  Not sure who they go with here.  Carmella is the least deserving of the five, so I could see them picking her.  Rarely does the logical person win these MITB matches.  Again, WWE has been operating in "Why not?" mode, so Carmella's the most in line with that batshit insane philosophy.

Justin: Carmella
Dan: I'm going with Nattie here. I think she wins and cashes this in fairly quickly for a nice heel title run.
Landon: I Hope Ellsworth gets killed with a Ladder. Natalya.
Dave: Becky Lynch 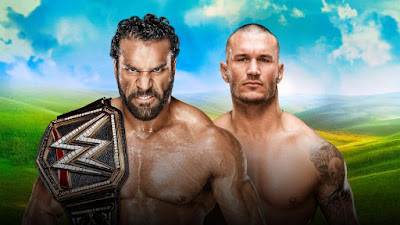 I give less than a shit about this match.  Jinder has to be the least deserving WWE Champion probably of all time.  I mean who else is there?  Stan Stasiak?  Sgt. Slaughter was a terrible Champion but at least his heel shtick was over.  Sid Vicious was awful in the ring but the fans loved him for a little while.  Jinder was persona non grata until they decided to push him out of the blue, and now Jinder apologists are all over Facebook.  Fuck this match, fuck this Title picture, and fuck everybody.


Men's Money in the Bank Match: AJ Styles vs. Shinsuke Nakamura vs. Kevin Owens vs. Sami Zayn vs. Dolph Ziggler vs. Baron Corbin 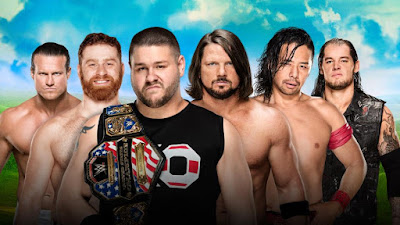 This is obviously the centerpiece of the show and better be the main event.  I think it's safe to say that 90% of fans are tuning primarily for this match.  AJ and Nakamura will interact here, hopefully setting up a feud down the line.  KO and Zayn will create numerous memorable spots and moments.  Ziggler may or may not be moving to Japan apparently (according to a recent Nakamura comment)?  I'd love to see that happen.  Anyway, this'll be great.  The result, probably not so much.  I have a sneaking suspicion this is their way of having Baron Corbin finally "arrive."  He wins the briefcase, gets 50-50 booked into oblivion for several months, and cashes in.  Either he wins the belt and becomes yet another "undeserving" Champion a la Jack Swagger, or he fails and goes the way of Damien Sandow.  It's a depressing thought, but look what company we're talking about here.

Justin: Baron Corbin wins
Dan: Owens doesn't need it, I think Justin is correct about AJ v Naka, Ziggler & Zayn should team up and be called the Z MEN!!!! Whatever, Corbin wins.
Landon: Gotta agree with Corbin. Everyone else is above losing 20 matches in a row, except Dolph who should be nowhere near this.
Dave: Shinsuke Nakamura


Can Smackdown snatch a victory from the jaws of shitty booking?  Eh, probably not.  But we'll find out together this Sunday!

Posted by Justin Enuffa Ballard at 9:25 AM