We're deep into the thralls of Attitude Era WWF. That means a lot of pointless matches, and a lot of pain.

You may be surprised to find out that Taka and the Kaientai crew could pull a good match out of the Headbangers. Most of the match had the Headbangers in the ring, and the talent of the Kaientai team really shone out in comparison. But towards the end we had Taka getting the hot tag and running excellently wild. It's a shame that the Japanese contingent would never raise above being openers and comedy acts. 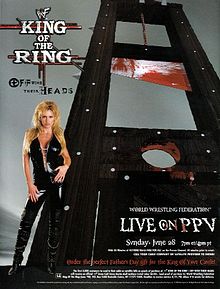 I thought this match was alright. Jarrett is a serviceable heel and good wrestler, Shamrock an awesome force with good work at this point. It may have dragged on a little bit, but towards the end Shamrock was able to pick up the momentum, take out Jarrett's manager, and get the tap-out for the win.

Meltzer Rating: *
I didn't feel like it wasted my time like some other matches on this PPV.

King of The Ring Semi-Final
Rocky Maivia vs Dan Severn

This is not yet The Rock who can work well with anyone. And Dan Severn wrestled a Dan Sever match, which was awesomely horrid at worse, and great at the very best. This was in the middle of the road, where Dan tried but Rocky was not selling well for him. The finish came from interference galore, where members of the Nation distracted the ref, while D'Lo splashed Dan for the eventual Rocky win.

Meltzer Rating: -1/2*
It was too short, and it meant we weren't getting Shamrock Severn

Jerry Lawler isn't funny. Holy shit is he not funny. I guess he must have been at the time, or at least I hope. I remember him being good when I started watching in 2006, but maybe that was just me being 12. But Lawler was the referee for this match, which didn't bode well for the quality. It was the classic heel referee who won't do anything for the babyface,which is miserably horrible to me. There were at least 2 times where Either Brian or Scott were down for a visual 10 count, but Lawler didn't count. This match did no one any favors as we made it to the end. The match ended, and I can't believe I'm typing this, when Christopher pinned the head, who had a bottle of Head and Shoulders attached to it.

Meltzer Rating: -**
Fuuuuck this match. Watch it for morbid curiosity only.

This match could have been so much better. Owen was always great, and X-Pac was on fine form this night. It was a good match story wise, as well. Technical skill was passed over for more brawling to reflect the problems the men had with each other. Unfortunately, shenanigans had to happen involving the Nation interfering. Ref distracted, Owen got DDT'd by Chyna for the pin. By X-Pac.

Meltzer Rating: **1/4
God, you know we need to go back to the Attitude Era guys. That'll fix everything.


The New Age Outlaws vs. The New Midnight Express for the WWF Tag Team Championships

Fun Fact, this is the only time (barring a Survivor Series match, but that one sucked and I think it was on a pre-show so who cares) that Billy and Bart Gunn faced off after breaking up. It was an alright tag match, but it was just filler, like the rest of this show before the Hell in A Cell match. Even the King of The Ring matches were tertiary to the commentators talking about the Hell in A Cell match coming up. Billy and Bart had a fun exchange, and Cornette proved to be a great distraction. But we just spun are wheels with this one. New Age Outlaws retained, because of course they did.


King of the Ring Finals
Ken Shamrock vs Rocky Maivia

This was a much better contest for The Rock. Which only made sense, these two had been working together for months at this point. HHH was on commentary, and I said earlier Lawler was bad, but Hunter here was terrible. Dick jokes and burying aplenty. And he was there for the entire fucking match. Action was good, Rock and Shamrock going back and forth, Shamrock's ankle was fucked up so it made the playing field even with a clearly inferior Rock in this fight. I might go back and rewatch this to see if I like it more. This definitely eclipsed all the quarterfinal matches from the Raw's before, and the semifinals from this show itself. Shamrock finally hooked in the Ankle Lock, and made Rock tap in culmination of months of Ken getting fucked. He didn't get a crown and cape though, which is sad.


Undertaker vs Mankind, Hell in a Cell

A match that is iconic at this point. It'sashame that everyone only remembers the two falls Foley takes, because most dont remember there's a solid ten more minutes of action after Mick told gravity to fuck off. There were horrifying chair shots, thumb tacks, and Mick takes most of it. Hell I had to re-watch the match to remember that he doesn't just take all of it. It's...it's really hard to talk about just because of how deathmatch like it is. I ate this up when I first saw it. But with a different palette, one that wants less blood and more wrestling, I really can't say I still like this match as much as I did before. Fuck's sake, Mick.

MICK CAME BACK OUT. HE CAME OUT HERE AND TOOK A FUCKING STUNNER YOU MADMAN. 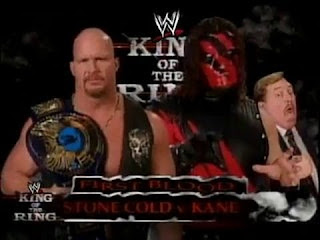 Who wanted to see this? How was Kane supposed to bleed? I dunno, but it was a pretty fun match to watch. The Cell dropped for some reason, and it didn't have much to play into the match they couldn't do with a chair or other weapon. Like I yelled above, Mankind came out to attack Austin, and Undertaker came out later,
accidentally clocked Austin in the head with a chair, which messed him up and opened him up. This gave Kane the victory.

(Austin Regained the Championship the next night, negating any meaning Kane winning would have)

(All ratings taken from the July 6th edition of the Wrestling Observer)
Posted by Landon Wayne at 2:04 PM