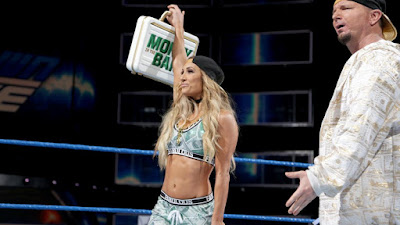 It should come as no surprise that I was not a fan of this year’s Money In The Bank, most notably the first ever Women’s Money In The Bank Ladder Match. I’m a feminist, although I prefer “casually feminine,” so watching exactly ZERO women climb the ladder and get the MITB briefcase was not only a disappointment, but kind of a punch in the gut. Even if I was attending MRA meetings with TJP, I’d still think this was top shelf bullshit.

There was quite a lot of buildup and excitement leading to this match. All the women WWE wants you to remember were mentioned in the hype videos, each woman was given a soundbite about how THEY wanted to be the first woman ever to do this thing that guys have been doing for years. It was pretty damn cool. I was stoked to see who the first woman would be to unhook the case and wobble-pose at the top. I was even prepared for the possibility that it would be someone I didn’t like. Like “No Splash Zone” Tamina, or “Please stop trying to Moonwalk” Carmella. I understand that my favorites hardly ever win, anyway, so I was just into it for that “moment.”  It was supposed to be historic, but when WWE gets involved in anything “historic” everything goes tits-up, and shits the bed.  So what we got was a joke-signee MAN climbing the ladder, and then giving it to one of the women while she sat on the mat.

I’ve heard this justified as a “heel tactic.” That it’s fair play because in a ladder match there are no rules. Maybe? I don’t know, because as far as I can tell if their is no rule stating you CAN’T do something, then you totally can. I don’t think there’s a rule that says you can’t just sit home and not defend the championship for months at a time. I mean, unless you’re Daniel Bryan. I’m happy to suspend disbelief, and I’m really good at it, but I’m gonna need something in return, not something taken away.

You can’t blame me for being confused, since on the same show, Jinder Mahal AND Randy Orton were both outside the ring for well over a 10-count. They didn’t get counted out, but The Usos did earlier in the night. So, when there ARE rules, they can be ignored OR followed, depending on what story they want to tell. That aside, if there are NO rules, how is that handled? WWE is just trying to tell a story, so even the basic CONCEPT of the match is only gonna get in the way. If all they wanted to do was get heat on Carmella and James Ellsworth, all they had to do was have James HELP Carmella win. He could have knocked Becky Lynch off the ladder and then pushed Carmella up it so she could grab the briefcase. Now there’s heat on Carmella and James for using “heel tactics” like a good heel should.


Instead, by having James Ellsworth, a guy, climb the ladder, unhook the case, and then give it to Carmella, they’ve taken all the heat OFF of them, and put square on Vince’s Lazy Booking. Carmella winning the first ever Women’s Money In The Bank through nefarious means is 100% a good call. Carmella seems like the perfect person to walk around with a bulky accessory backstage, bragging about it and teasing threats to cash in. Now it just looks like the company that has been pushing their women athletes as legitimate Superstars for a few years now, still doesn’t have any fucking faith in them.

So, was the end game getting Carmella heat? If it was, it was a lazy, misguided attempt. Carmella and James are an afterthought at this point, especially since they’re just hitting the reset button and doing it again on Tuesday, anyway. Was it carefully laid out commentary about how women are constantly overlooked and devalued in the workplace? That’s giving way too much credit to people that have a hard time remembering names like “Antonio” and “Langston.” Maybe, no matter how much Stephanie tells us that she’s leading the charge for women in the WWE, they just don’t give a fuck about them. Most of the evidence and history points in that direction.

I would like to know how the nerds that justified this with “It was no DQ” and “It’s a classic heel move” would feel if it was reversed. Let’s say Roman Reigns is fighting Brock Lesnar at next year’s Wrestlemania. Let’s say it’s to determine who the actual better wrestler to take down the Dead Man at 'Mania is. Whoever wins gets to keep Taker’s hat and coat; hell it’s still probably sitting in the ring in Orlando. It’s a no DQ match, obviously, so after these two warriors beat the shit out of each other for 30 minutes, Summer Rae runs in and gets a flash-pin on Lesnar, then hands the hat and coat to Roman. Some will say “But Summer wasn’t even IN the match to begin with! Only Roman or Brock can win because they were the ones who beat Taker!” That sounds familiar, to which I would reply “But it’s no DQ. It doesn’t matter that the match BY DESIGN was only for those two men. Roman used his intelligence to win, by ignoring basic concepts.” That’s a weak explanation when you’re trying to defend a company that literally writes its future and then constantly goes back to rewrite their own history. Sometimes on the same show.

So, yeah, this sucks for every single person involved. Carmella and Ellsworth were deflated before they could 'flate, Bryan’s reasoning for redoing the match is flimsy at best, even if I think it’s probably the only move they have left, the Women’s Division gets shafted again, the fans are pissed, I wrote way too much about it...

Alright, I’m done bitching, let’s get to the good stuff that happened in WWE Land…

Um, Usos got counted out, which I’m fine with because the last thing I want is another New Day reign. Lana lost only due to a distraction finish and got in way too much offense. Randy won’t stop proving he’s dumb as rocks. And fucking Corbin won.

At least The Fashion Police are laying down consistently funny backstage segments, and Dango and Breeze have been undercover great wrestlers since NXT.  I just wish The Revival was on Smackdown wrecking shop instead of STANDING IN THE RING DOING NOTHING like on Raw.

Speaking of Raw, let’s not.

Lastly, Kassius Ohno and Aleister Black put on a really good match in front of a crowd only a necrophiliac could love.