Punjabi Prison: The Match No One Wanted to See Again 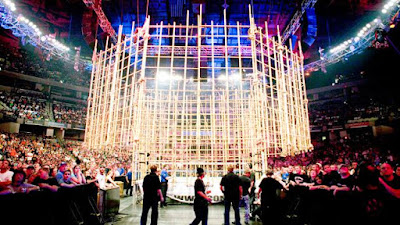 2017 has GOT to be the worst year of Randy Orton's career.  Despite being booked as Smackdown's centerpiece, Orton has turned in nary a memorable performance except perhaps in his unexpectedly splendid match against Luke Harper at Elimination Chamber.  And it's not really his fault either.  First he was saddled with an embarrassingly hokey feud against Bray Wyatt which culminated in a forgettable 11-minute WrestleMania outing (complete with hackneyed video projections of bugs and worms), followed by one of the worst "matches" of all time in the House of Horrors shitshow a month later.  Then he got to lose the WWE Title to a career jobber Vince suddenly decided was The Guy to make WWE a household name in India ("He's the only Indian guy on the roster. Whatever, he'll do...").  Then he got to lose to him again in the exact same fashion a month later, and now he gets to lose to him in one of the stupidest gimmick matches WWE's ever created, the Punjabi Prison match.

For those not familiar, the Punjabi Prison match was created (in storyline) by The Great Khali during his 2006 feud with The Undertaker.  You remember 2006 right?  Arguably WWE's creative nadir?  So yeah, let's recycle some ideas from that period (When's Keven Federline coming back??).  Only one problem with the Taker-Khali match - the night of the show (Great American Bash), Khali was found to have elevated liver enzymes and was not cleared to wrestle.  So the climax of this whole feud had to be scrapped, and Taker fought Big Show instead, in a near-unwatchable 21-minute train wreck, on par with Al Snow-Bossman in the Kennel in a Cell.  The PP match was trotted out one more time in the fall of 2007 and this time Khali was able to participate, losing a mediocre 14-minute affair to Batista.

This clusterfuck of a match was then forgotten about, deservedly so, for a decade until last night when it was announced that at Battleground the main event will be Jinder Mahal defending the WWE Title against Randy Orton (a-fucking-gain) in a Punjabi Prison match.  Oh good, that'll help me care about Jinder as a main eventer.  Put him in one of the dumbest, most convoluted gimmick matches ever invented, against a guy I'm sick to death of seeing in Title matches.  A Canadian playing an evil Indian foreigner gimmick in 2017 feels horribly out of touch as it is, but having him co-opt the one gimmick match invented by the only other WWE wrestler of the same ethnicity, just to sell more tickets in India, feels dangerously close to pandering.  While we're at it, let's bring back Rene Dupree and have him introduce the French Tickler match, that's sure to blow up WWE's attendance in France, right?  It's not even like this match type is Jinder's specialty.  He's never wrestled in one of these before, but simply because another Indian guy invented it that gives Jinder some kind of advantage?  Try to really examine the logic behind this.

I said Punjabi Prison was convoluted.  Take a gander at these rules:

Jeezus fuckin' Christ.  I'm shocked Vince Russo didn't come up with this drivel.  I should not need an entire paragraph to explain the rules of a wrestling match.  You assholes.  This is almost as needlessly complicated as TNA's Reverse Battle Royal.  Seriously, we can't get a revival of WarGames because Vince McMahon didn't create it, but let's bring back one of the most mind-numbingly idiotic WWE gimmick matches of all time.  At the time Battleground takes place, New Japan will be in the midst of what looks on paper to be one of the greatest wrestling tournaments ever assembled.  Meanwhile WWE will be trying their damnedest to make everyone (in India anyway) think Jinder Mahal is the second coming of Hulk Hogan, in a match that could very well outscore House of Horrors on the Suck Meter.

I cannot wait for this Jinder experiment to just be done.  Jinder's matches could not be more generic if he were a stock Create-a-Wrestler, his gimmick could not be more dated if his name were Dino Bravo.  I also cannot wait for Randy Orton to go back to being a special attraction a la John Cena.  Let the guy work a reduced schedule, have him feud with wrestlers who will actually motivate him, and keep him away from the WWE Title picture.  With a roster this strong how did we get to the point where the WWE Title match is likely to be one of the worst matches on any given PPV?  We went from AJ Styles and John Cena tearing the house down at the Rumble, to Orton and Jinder embarrassing themselves in a wooden cage.

I did not enjoy either Mahal-Orton match you've presented, nor did I enjoy either Punjabi Prison match from a decade ago.  Thank you for combining these two awful things into one.